From the editor
by Ramona Giwargis
Santa Clara Mayor Lisa Gillmor delivers her State of the City address in this file photo.

In an increasingly divisive political climate, our job as journalists is to tell stories of power and privilege.

And by virtue of our jobs, journalists and government officials often clash. We fight City Hall for answers. We fight for documents to shed light on what’s really going on. We fight to question powerful politicians, sometimes through layers of “spokespeople” funded by taxpayer dollars to control the message. We’ve come to expect it.

But what we do not expect — and what stirs a chilling effect — is government officials using public resources to spread misinformation, half-truths and demonstrably false statements in an effort to discredit honest reporting because it is unfavorable to them. This is what happened in Santa Clara last week, and unfortunately, it is not new. But it needs to stop.

After our senior reporter Janice Bitters spent months carefully reporting a story about Santa Clara’s inability to account for campaign work performed by a taxpayer-funded PR firm, she found herself the subject of a city press release. It isn’t the first time Bitters was inappropriately called out by Santa Clara City Hall — she became a City Council agenda item in September following a hard-hitting story about the city’s botched-up contracting procedures.

The press release claims Bitters “twisted the facts” and insists that Santa Clara did not use public funds or resources for political purposes. But Bitters’ story did not say the city used taxpayer dollars on campaign materials — it said that we don’t know if they did or not. And the reason we don’t know is that Santa Clara has no records — not a single email, memo or document outside of already published press releases — to show us exactly what the PR firm, Singer Associates, worked on. Singer’s billing statements say the company edited and approved a set of “Measure A talking points” a day before the 2018 election.

Who were the talking points for? What did they say? How were they used?

That certainly sounds like political campaign work to me. But to be sure, Bitters spent months requesting emails and documents related to the billings from Santa Clara only to be told repeatedly that none existed. Not a single document. Santa Clara wants the public to believe it did not violate the law by using public dollars for political purposes, but officials can’t seem to account for all of the Measure A work done by Singer. The “talking points” somehow disappeared. So how can we be sure?

Santa Clara is essentially saying, “Take our word for it, but we’ve got nothing to show you.”

The release also claims city officials told Bitters that “the development of materials and news releases for Measure A was a collaborative effort among communication experts that have expertise in developing information and education materials for ballot measures.”

“This fact does not nicely fit into her ‘story,’” the release concludes.

But that vague explanation — which doesn’t say who the “experts” were or what they did — was quoted word-for-word in our story. 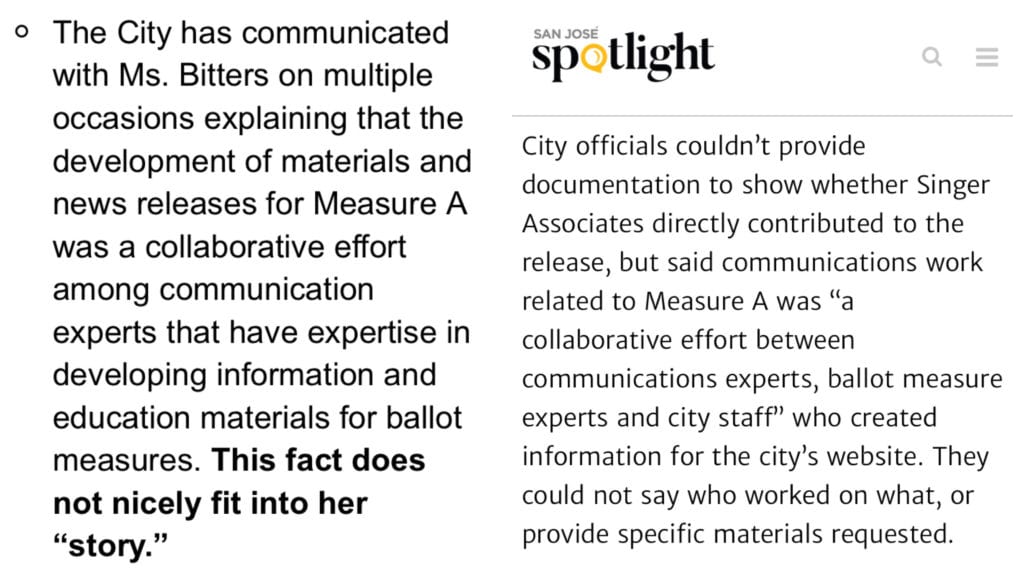 The city also claimed we misrepresented its 90-day email retention policy, though it was reported verbatim. And, as a First Amendment expert told Bitters, it is not a good practice and documents such as this — those dealing with work performed by a taxpayer-funded contractor — should be kept much longer. 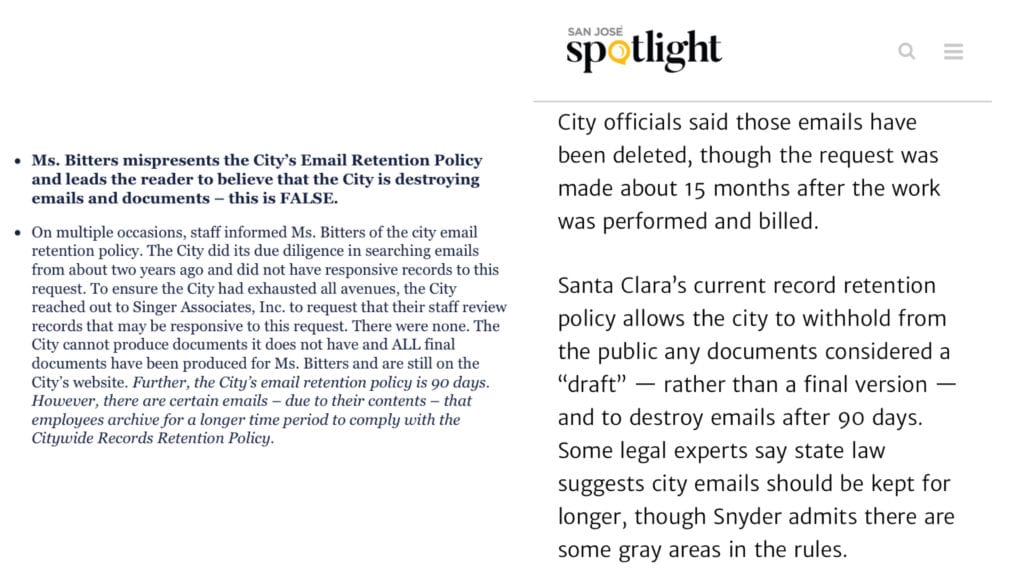 In an attempt to set the record straight, Bitters sent these corrections to the city’s press release to Santa Clara officials. We never heard back, and they have yet to correct or acknowledge the inaccuracies and false statements in the release.

Unfortunately, San José Spotlight is not alone in becoming the subject of public attacks from City Hall.

Santa Clara elected leaders on three occasions in the past year placed an item on a City Council agenda to publicly dispute credible reporting by us, the Mercury News and the Santa Clara Weekly.

During a council meeting last week, Councilmember Debi Davis used her platform to lambast a Mercury News editorial that opposed Measure C, an initiative on the March ballot that would divide the city into three districts for future elections.

“I came home to a nasty editorial in the Mercury News that just blew me away because there was, like, no fact, it was sheer speculation and ‘opinion,’” she said, using air quotes for the word “opinion.”

She added that she hoped people would turn to City Clerk Hosam Haggag for information on the measure rather than “believing fake news.”

Her comment was quickly criticized by her colleague, Councilmember Raj Chahal, who pointed out the inappropriateness of using the dais to attack the local media.

The city’s elected leaders have regularly referred to reporters as “fake news” while using their platforms to personally discredit individual journalists, such as Bitters. This is the same city whose mayor, Lisa Gillmor, in 2016 blocked me on Twitter because of a story she deemed unfavorable.

She quickly unblocked me after learning how problematic that could be.

Enough is enough. We’ve come to expect these reckless attacks on free speech and journalism from Washington, D.C. — but we should not tolerate it from our local elected officials.

Santa Clara lawmakers should understand the role of the free press and our responsibility to ask tough questions and hold them accountable. A story that uncovers the city’s failures and shortcomings is not an attack, nor is it “fake news.” And using public resources to spin, block, stifle and twist the truth is not only a waste of public resources, it will not stop us from doing our jobs.

If anything, it pushes us to dig deeper.

From the editor: We could not do it without you