CoronavirusEconomy
by Eduardo Cuevas
and Lorraine Gabbert
Customers like Barbara Gallaty were adjusting to the new normal on Monday when the governor once again ordered the closure of personal care businesses. Photo by Lorraine Gabbert.

Santa Clara County is back on that list, as of Sunday, after being taken off July 6.

Newsom announced a dire number of new cases, albeit not many new deaths, that placed California on par with Florida and Texas in states struggling the most to contain the novel coronavirus.

“We’re seeing an increase in the spread of the virus,” Newsom said. “That’s why it’s incumbent upon all of us to recognize soberly that COVID-19 is not going away anytime soon, until there is a vaccine and-or an effective therapy.”

California saw more than 8,300 new cases Sunday. The state’s 14-day positivity rate — which determines positive results out of all tests conducted — jumped to 7.4 percent, a 21 percent increase from the latter half of June. In health care systems, hospitalizations and intensive care cases from COVID-19 are modestly increasing across the state as well.

Santa Clara at first was not identified by Newsom. But on the California Department of Public Health’s website, the county was on the state watchlist for hospitalizations.

By 4:31 p.m. Monday, just hours after personal care businesses reopened, local health officials confirmed the South Bay landed back on the watchlist and the county must close those businesses again by Wednesday, three days after being among the counties monitored by state health officials.

“We wanted to share this information with businesses and residents as soon as possible,” the county news release said.

The announcement came as Santa Clara County reported 253 new confirmed cases Monday, one of the highest daily counts, though there was just one death. Hospitalizations jumped to 129 patients infected, up from just 88 a week ago, when Newsom had first taken Santa Clara off the watchlist before bringing it back.

“The fight against COVID-19 is unfortunately far from over, but our residents and businesses have shown how we can collectively make an extraordinary difference in saving lives and safeguarding our community,” said Dr. Sara Cody, health officer for Santa Clara County, in a statement announcing the closures. “We strongly urge everyone to rigorously and consistently follow the state and local health orders.”

In a video released Saturday, Cody warned the county’s numbers “aren’t going in the right direction” and residents needed to limit interactions with others outside their homes, wear face coverings and physically distance at least 6 feet.

“If we come together and we’re successful, we can get back to where we want to be — a community where businesses are able to stay open and kids can safely return to school,” Cody said.

Before Newsom’s demand to close, the county planned for many businesses — including nail and hair salons, barbershops, gyms, tattoo parlors, hotels and motels — to reopen under industry-specific safety measures.

And businesses appeared to do so, at least for a few hours.

At San Jose’s Diva Nail Spa, manicure stations were no longer in connected rows, but instead individual stations were spread 6 feet apart. Only every other pedicure chair was used and the number of customers were limited.

Plexiglas separated manicurists from clients and customers were given hand sanitizer and a COVID-19 questionnaire when entering. Nail polish colors were posted behind plexiglass.

Staff wore masks and gloves. Clients had on face coverings. The stations were cleaned after every client and every two hours the salon underwent a thorough sanitizing.

“We do everything for the customer,” said owner Van Dang. “We follow Santa Clara County guidelines.”

Dang said she was worried about being closed since March but spent the time cleaning and preparing the shop. She said she was relieved that her customers are returning.

Client Barbara Gallaty was one of the last customers to receive a pedicure before Newsom’s order to shut down again.

“This is how it’s going to be,” Gallaty said gesturing at her mask, “so let’s move on with life.”

Forma Gym COO Ralph Rajs on Monday opened his San Jose location indoors and limited his water aerobics class to 25 people, rather than the usual 50 per class.

Forma gave temperature checks to staff but not gym members. Touchless towels were handed to guests by tongs and members were required to sanitize their machines before and after use.  Clients were not required to wear masks while exercising outdoors.

“There’s definitely been a lot of planning and strategizing,” Rajs said.

Rajs was relieved in early June when the county allowed outdoor recreation and pool use for athletic clubs. That relief, however, was tempered. He set up cardio equipment outdoors since June.

“We’re all watching the numbers,” he said. ”We have to watch what the state and county say. We’re going to do our very best to stay open.” 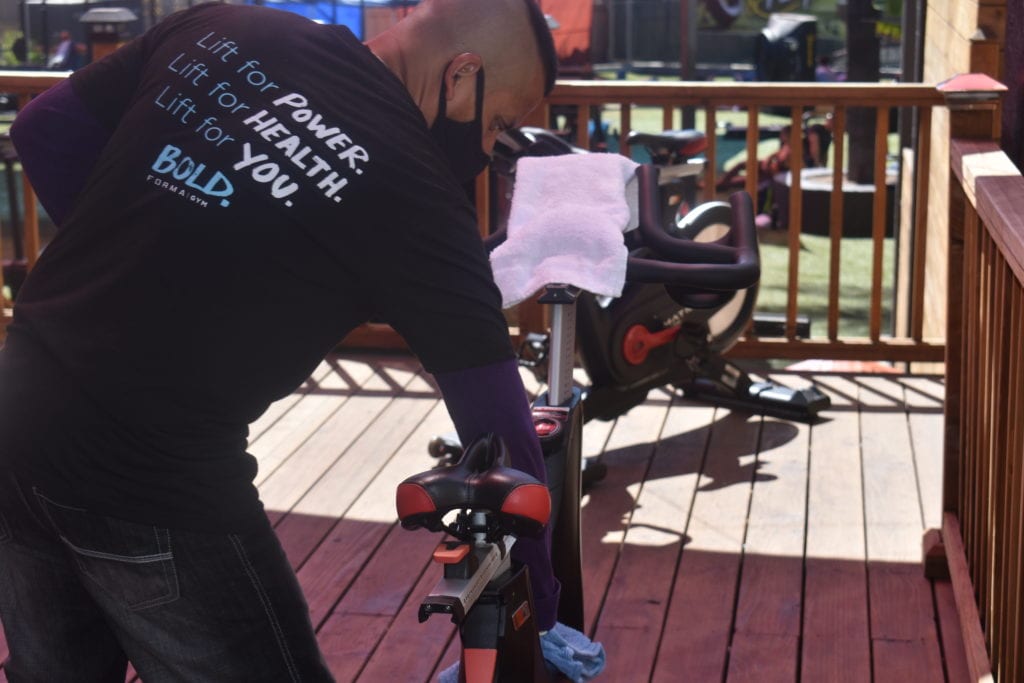 As customers at the nail salon enjoyed their pedicures and gym members wiped off their machines, protocols were already changing. The county’s closure announcement effective Wednesday came as a stark reminder of ever-changing public health measures made in response to the pandemic. Some orders remain, some do not.

“It’s just a colossal failure of government,” said Eddie Truong, director of government and community relations for the Silicon Valley Organization, the area’s largest chamber of commerce. “The state must explain and elaborate on why the decision was to reverse reopening based on key metrics and science that the governor announced a few months ago.”

As early as last week, Santa Clara County executives questioned decision-making by the state, including the initial rejection of the county’s intended move to reopen personal care services, gyms and other businesses.

Truong said tech companies would likely not be affected by Monday’s sudden change, but small businesses, such as nail salons and gyms, would be most impacted. The uncertainty sows distrust, he added.

“Until we get some clear answers that are rooted in science and data and not pure politics, we are in a situation where the public is going to lose faith in our government. And when they lose faith, they are not going to follow shelter-in-place and other orders,” Truong said.