With all the precincts reporting in District 6, incumbent Councilmember Dev Davis fell to 49 percent of the vote, sending her to a November runoff with biomedical engineer Jake Tonkel.

As of midnight, Davis’ slim 50 percent lead dropped below the majority threshold as her three challengers gained steam. Tonkel came in second with 27 percent of the vote. San Jose Housing Commissioner Ruben Navarro was at 17 percent and college student Marshall Woodmansee trailed with 7 percent of the vote.

Celebrating her expected win at a small re-election party with her family and friends, the business-friendly 41-year-old said she’s ready for the next four years, eager to continue her work tackling homelessness, restoring city services to District 6 residents and focusing on public safety.

“We’re being … cautiously optimistic because you never know how the votes are going to turn out but it’s nice to have a majority,” Davis said. “I want to keep serving District 6.”

According to recent financial disclosures, Davis raised more than all of her challengers combined, with $138,000 in support from powerful business groups and developers across Silicon Valley.

District 8 Councilmember Sylvia Arenas also was on her way to a second term, tallying 58 percent of the vote. Evergreen School District board member Jim Zito on Tuesday was second with 43 percent of ballots cast.

“I’m honored by the strong support that I’m receiving from our community in these early numbers — it shows that my focus on supporting our families, strengthening neighborhoods and improving public safety is resonating in District 8,” Arenas said. 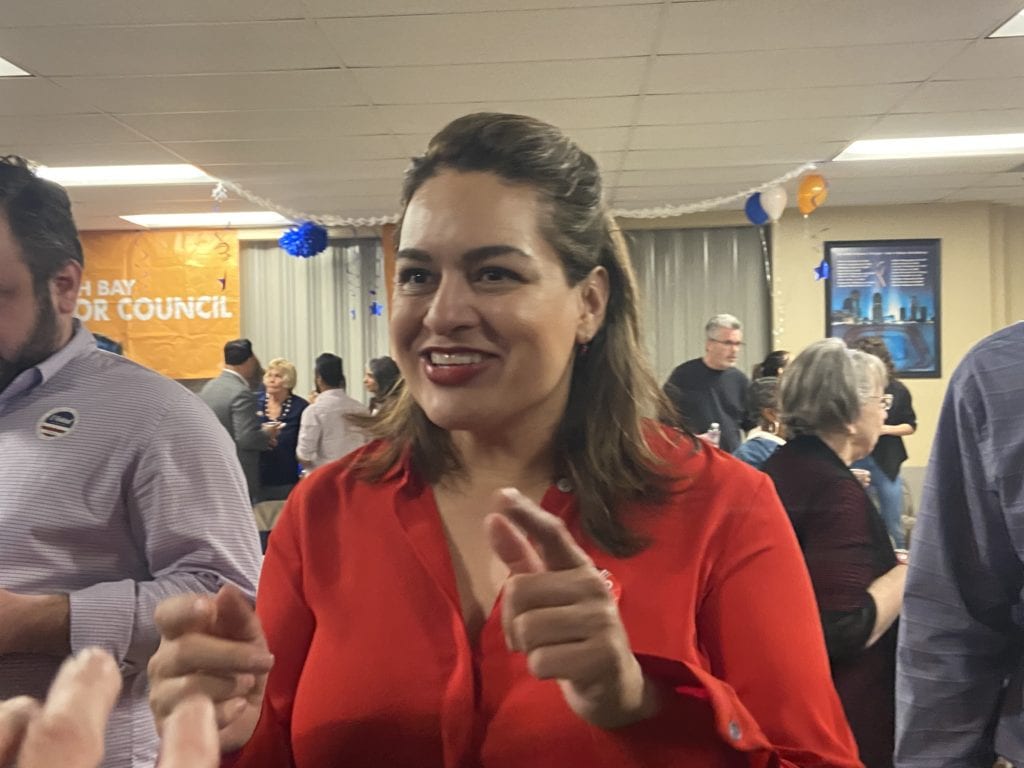 Zito lost vital support from top endorsers, including San Jose Mayor Sam Liccardo, the Mercury News Editorial Board and the Silicon Valley Organization after details of his divorce were reported by this news organization last month.

Arenas said she’s motivated to further her policies rooted in her promise to provide for young children and families while fighting for District 8’s access to critical services and programs.

In her follow-up term, the Latina from the city’s East Side has said she will maintain her promise to combat the city’s response to rising rates of sexual assaults, advocating for subsidized child care programs and encouraging more economic development in her district.

Labor-aligned San Jose lawmaker Sergio Jimenez, who represents Oak Grove, Monterey Road and Coyote Valley, also is on his way to another term, leading his lone challenger, Jonathan Fleming, with 55 percent of the vote.

The incumbent is poised to be declared the winner as results continue to trickle in, showing a slight lead over the last 2 hours since polls closed.

“I think (the results) confirm the work we’ve been doing over the past three years,” he said. “The majority of folks feel that we’ve been moving the district in a positive direction and there’s still much work that has to be done and I’m honored to get another opportunity to continue serving the residents of District 2.”

Jimenez added that he’s focused on tackling tough issues like housing and homelessness. He said he’s eager to continue the fight in his next term without the influence of special interests, making good on his promise to build more interim housing and beef up law enforcement in District 2.