San Jose City Council candidate Jim Zito controlled nearly every aspect of his ex-wife’s life, from the temperature in their home to chores, finances and even how much toilet paper the family used, court documents reviewed by San José Spotlight show.

Zito and his ex-wife, Zoe Bizzell, married in 1991, lived in the Evergreen suburbs as he worked in tech and served on the San Jose Planning Commission and Bizzell raised their three children. But behind closed doors, the divorce records show Zito took control of everything during their 16-year marriage. According to Bizzell’s declaration, she was forced to get permission to leave the house, fill out a mileage logbook and save receipts from purchases for him to highlight and review. She was restricted on how often she could buy gas and needed approval to buy essential items for the kids, even underwear.

Zito declined comment Tuesday, but said he filed a declaration to the court responding to the claims in the divorce filings. Zito didn’t have a copy of the document and it was not immediately available to San José Spotlight. Calls to his attorney, Kathryn Schlepphorst, were not returned.

On Wednesday, Zito issued a news release saying he’s “been a loving, proud father, and lived up to all of my familial and financial obligations, and in the toughest of circumstances.”

Bizzell said in the declaration that she could not open bills without his permission, did not have an ATM card and relied on Zito to transfer just enough money to pay bills. Zito required the family to use just two squares of toilet paper — which he would count by verifying the empty rolls in the trash — and set the house temperature to no more 65 degrees. Bizzell said she couldn’t seek medical treatment without permission. If she was in pain, she was told to “just deal with it.” 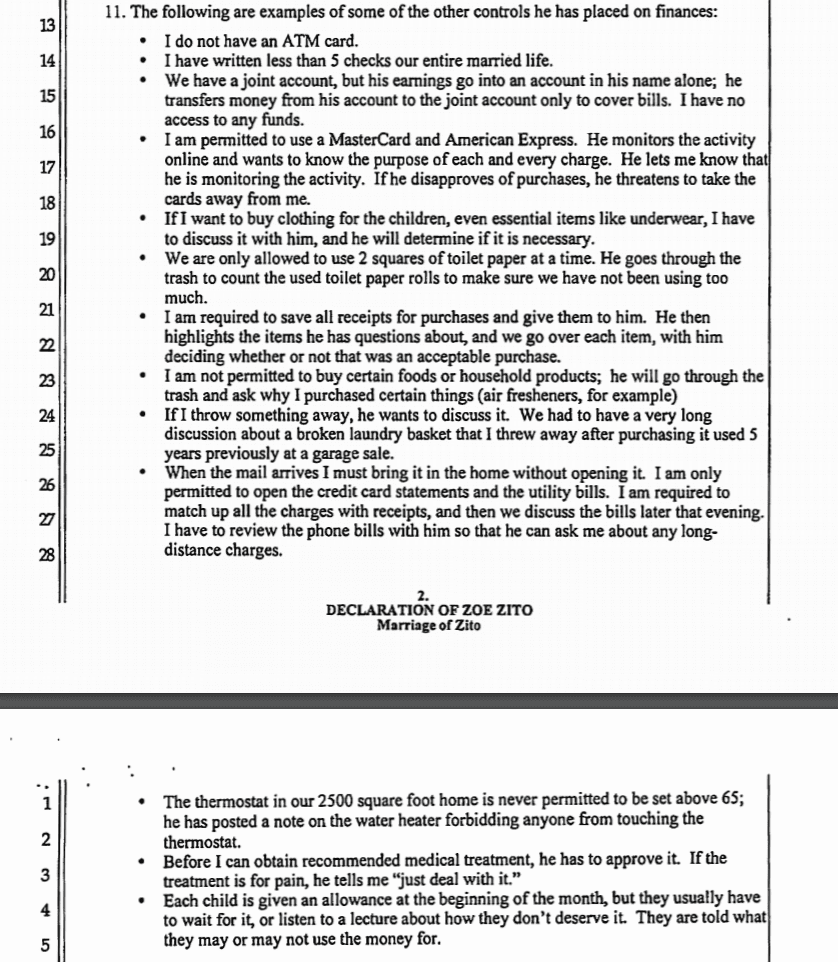 As he flirted with running for San Jose City Council in 2007, the documents state Zito gave Bizzell a Valentine’s Day card telling her how she “could improve myself to help his position in the community.”

“I feel like I have been trapped in a nightmare, and have not known how to escape,” Bizzell said in her declaration. “I walk on eggshells hoping not to provoke him. I can see that our daughters are affected by their father’s extremely controlling behaviors, and that has prompted me to take this action.”

Bizzell, who filed for divorce in 2007, verified the claims in the public divorce records in an exclusive interview with San José Spotlight. Though the couple parted ways in 2007, the fight for child custody and support dragged through the courts for another decade. They share custody of a 16-year-old son while their two daughters are now adults.

The divorce documents came to light after they became fodder in a series of campaign mailers and a website funded by the San Jose Police Officers Association as Zito, a longtime community fixture, seeks to unseat Councilmember Sylvia Arenas in District 8. The SJPOA has endorsed Arenas’ re-election bid.

“The San Jose Police Officers Association will always support standing up to a bully, and in our opinion what these court documents reveal is that Jim Zito is a bully and does not have the temperament and respect for women to be an elected official,” said Paul Kelly, president of the association. “There is certainly more to come and those who have endorsed Mr. Zito have to ask themselves if this is the man they want our children looking up to, for the SJPOA, the answer is a firm no. Evergreen residents deserve better.”

According to court records, early in their marriage, Zito handed Bizzell a two-page list outlining his expectations from chores to how she prepares his lunch and other “household responsibilities.”

“I prefer to write these things down because I do not want to argue with you about them,” Zito begins. “They are not meant to be negative, but like you say; I just want to let you know what bothers me.” 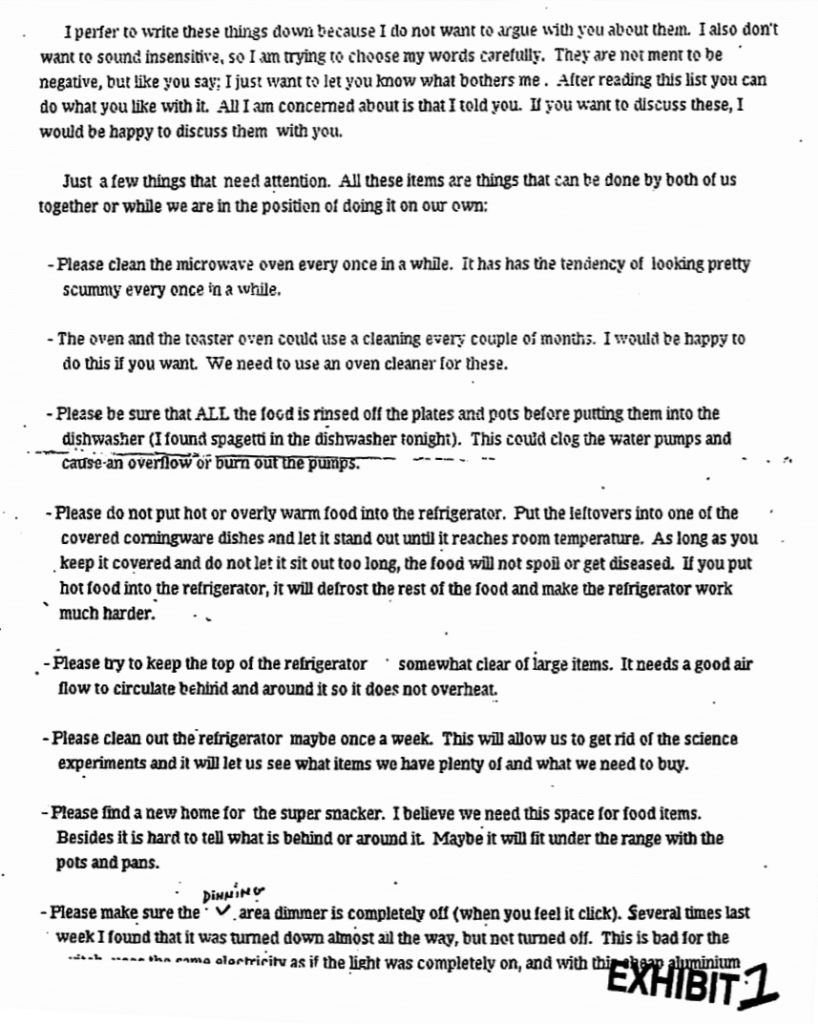 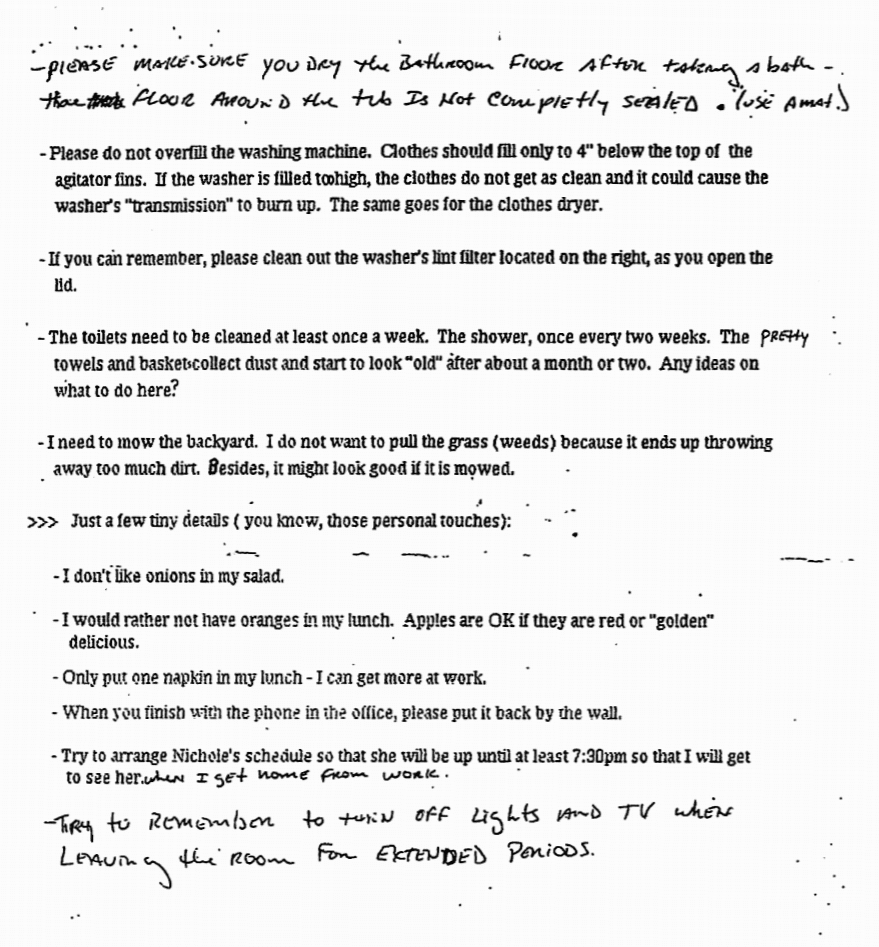 The list includes requirements for how often Bizzell should clean the oven, refrigerator, toaster and microwave. It details how much laundry she could load into the washing machine and how often she must scrub the showers and toilets. The list concluded with what Zito called “personal touches,” including not having onions in his salad, replacing oranges with “red or golden delicious” apples in his lunch and only packing one napkin because he “can get more at work.”

At the direction of the Santa Clara County court, Rafael Padilla, a psychologist and licensed marriage and family therapist, reviewed court records, interviewed the family, their friends and kids’ teachers in September 2007. Padilla ordered Zito to complete a 16-week class to address “domestic violence issues and management of emotions.”

Zito said in his news release Wednesday that he was not required to go to the class.

“At no time did the court order me to attend any anger management class,” he said. “Instead, our judge-ordered child custody agreement stated that mother and father had to attend Co-parent counseling and continue with individual counseling.”

Detained and handcuffed by police

Three years after Zito was ordered to seek help for domestic violence issues, court documents show he was involved in a confrontation with his 19-year-old daughter, Nichole. 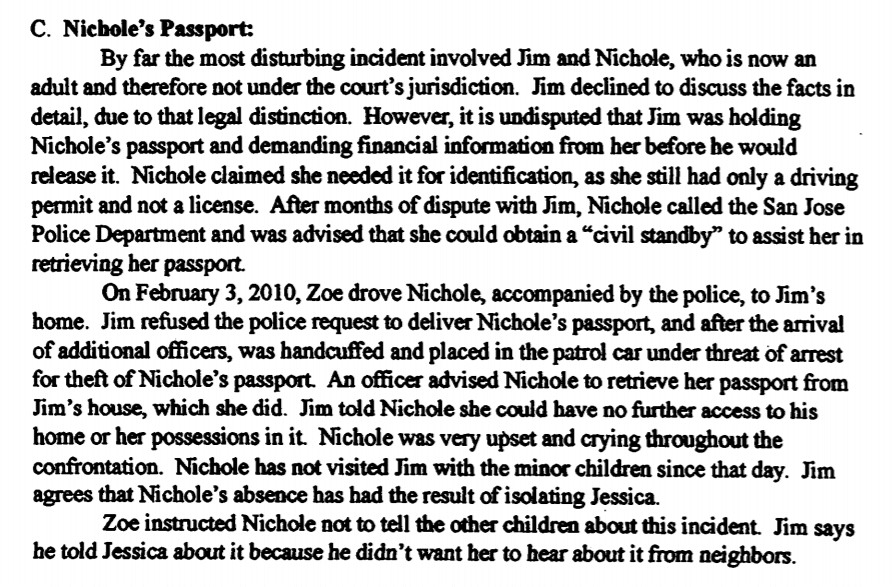 Zito had possession of his daughter’s passport at his home, prompting her to go by his house to get it back. According to the records, Zito refused to return the passport to Nichole so she called police for a “civil standby” to help get it back.

“Nichole claimed she needed it for identification, as she still had only a driving permit and not a license,” the documents state.

On Feb 3, 2010, Nichole went to her father’s home accompanied by police officers to retrieve the passport. Zito defied the police officer’s request to return it — and became combative. After additional officers were called, Zito was “handcuffed and placed in the patrol car under threat of arrest for theft of Nichole’s passport,” according to the documents.

“An officer advised Nichole to retrieve her passport from Jim’s house, which she did. Jim told Nichole she could have no further access to his home or her possessions in it. Nichole was very upset and crying throughout the confrontation,” special master Susan E. Crandall wrote in her report.

Despite Zito denying any controlling and emotionally abusive behavior, his ex-wife told San José Spotlight that she stands behind her statements to the court.

“The court documents tell my story, are factual and validate the reasons why I filed for divorce,” Bizzell said in a statement. “No matter how difficult this has been, I have never regretted my decision.”