Justen Torres had a big vision this year: Build Get Away Games & Media, a place where players are trapped in a themed room, solving clues and puzzles before they can get out.

“Escape rooms are getting popular here because it is a new way for friends, family and co-workers to bond and build relationships,” Torres said.

Just as Torres and his partners in March prepared to open their doors on Story Road in San Jose, the COVID-19 pandemic hit. Get Away Games never opened. Instead, Torres joined the ranks of businesses struggling to survive because of the pandemic.

According to a recent poll by Alignable, a Boston-based online business referral network, 44% of minority-owned small businesses nationally cannot pay rent in November. 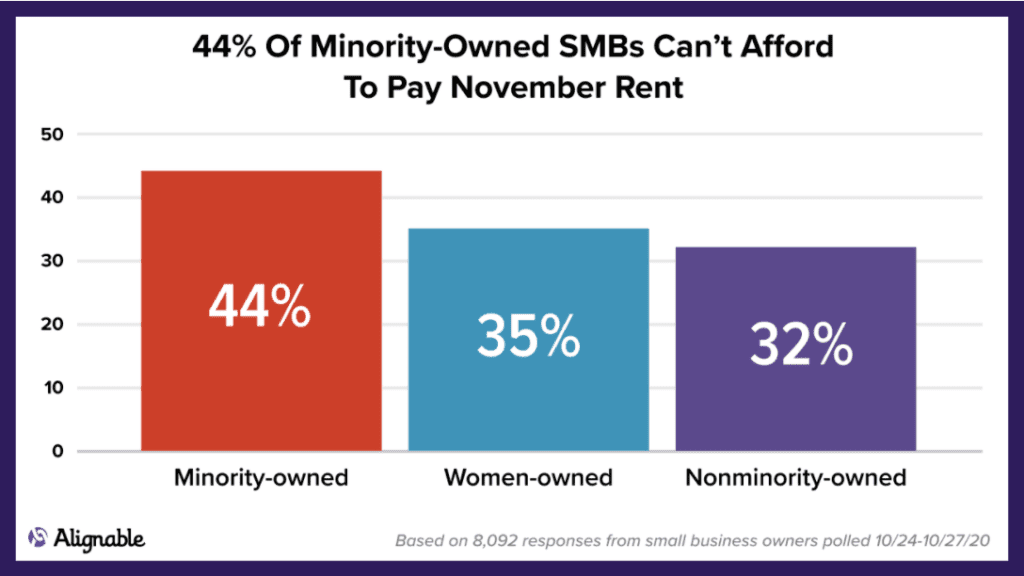 In California, 33% of small business owners were unable to pay their full rent on time this month. The number was higher for minority-owned small businesses — about 38%.

That compares to 35% for women-owned businesses and 32% for nonminority-owned companies. The industries hit hardest are beauty salons, restaurants and retailers.

“We had everything ready to go and then we were in lockdown,” Torres said. “We thought two weeks would’ve been tolerable as we can reopen in April. But then it continued on and on.”

Torres said he signed a 12-month lease with monthly rent of more than $4,000 before the pandemic. But now Torres can no longer pay rent and has decided to throw in the towel.

Minorities have an entrepreneurial spirit, one lawmaker said, but face more risks in business.

“They have small companies that are mom-and-pop and, unfortunately, some are service-related and are at a higher risk,” said San Jose Councilmember Johnny Khamis.

Khamis chairs the City Council’s economic development committee and was a small-business owner for 20 years. He said he worries about the predicament businesses are facing.

“Let’s face it. Nobody wants to dine outside when the temperature is 40 degrees,” Khamis said.

Santa Clara County this week will close indoor dining after an alarming surge in new COVID-19 cases and hospitalizations. The state moved the county to the most restrictive purple reopening tier.

“By next year we’re going to hopefully be in a situation where we can afford rent,” owner Jerry Wang said. “As soon as we got the keys on a Friday in March, we had to shelter in place afterwards.”

During the second month of the shutdown, the Taiwanese-American business owner established a drinks donation program, dropping off refreshments to first responders and nurses around the Bay Area.

Then, during the Black Lives Matter protests downtown in May, Wang participated in a program called Feed the Block, providing ice water, tea and coffee to activists.

Support from the community and the city has helped Paper Moon Café stay afloat, Wang added.

Programs such as San Jose Al Fresco, which provides guidance and resources for local businesses to operate outdoors, have helped, he said.

But as winter approaches, the program may face challenges due to cold weather discouraging people from eating or shopping outdoors.

“People may not have the infrastructure ready to continue Al Fresco,” said Jesus Flores, president of the Latino Business Foundation of Silicon Valley.

Flores is surveying small, minority-owned businesses in San Jose to assess their needs and how they’ve been impacted by COVID-19.

“Once the results are finalized by the end of the month, we will put a specific program that will support small businesses that are open, but not at full capacity, and need to survive or those that are not able to open, such as banquet halls,” Flores said.

Flores is working with the city’s Office of Economic Development to help small businesses renegotiate leases and buy equipment.

“We know that our businesses are suffering,” he said, “but I know our business community is resilient.”