A new variant of COVID-19 has been discovered in Santa Clara County, health officials confirmed Sunday, and it’s linked to several large outbreaks.

Still, officials said it’s is too soon to know how prevalent the L452R variant is statewide, nationally or globally — though it now makes up a quarter of the cases local scientists studied through a sequencing process. They also can’t say whether it’s more infectious or transmissible.

Local health officials on Sunday confirmed the variant has been identified in several large outbreaks in Santa Clara County.

“The fact that this variant was identified in several large outbreaks in our county is a red flag and must be investigated further,” said Santa Clara County Health Officer Dr. Sara Cody. “This virus continues to mutate and adapt, and we cannot let down our guard.  This news underscores the need for everyone to follow all prevention measures and get vaccinated as soon as they are offered the vaccine.”

The state is working with the Centers for Disease Control and Prevention and local public health departments to learn more about the variant, including how it spreads.

The variant is not the same as the highly-contagious strain spreading in the United Kingdom.

“It is common to identify variants of viruses like SARS-CoV-2, and we are working with our federal, local and university partners to better understand this variant and how it might impact Californians,” said Dr. Erica Pan, state epidemiologist for the California Department of Public Health. “It’s too soon to know if this variant will spread more rapidly than others.

Pan said during a news conference Sunday that the discovery of the variant is a critical reminder for people to follow health guidelines.

“It reiterates how important it is that we need to continue to do all the things we’ve been asking the public to do, which is to watch your distance, wear a mask, stay home and away from mixing with others and when the vaccine is available to you, to get vaccinated for COVID-19.”

Dr. Charles Chiu, a virologist and professor of laboratory medicine at University of California, San Francisco, said Sunday that a network of labs identified new variants after sequencing COVID-19 cases. Chiu said the research found most of the variant cases are in Northern California — and the variant is becoming more prevalent. 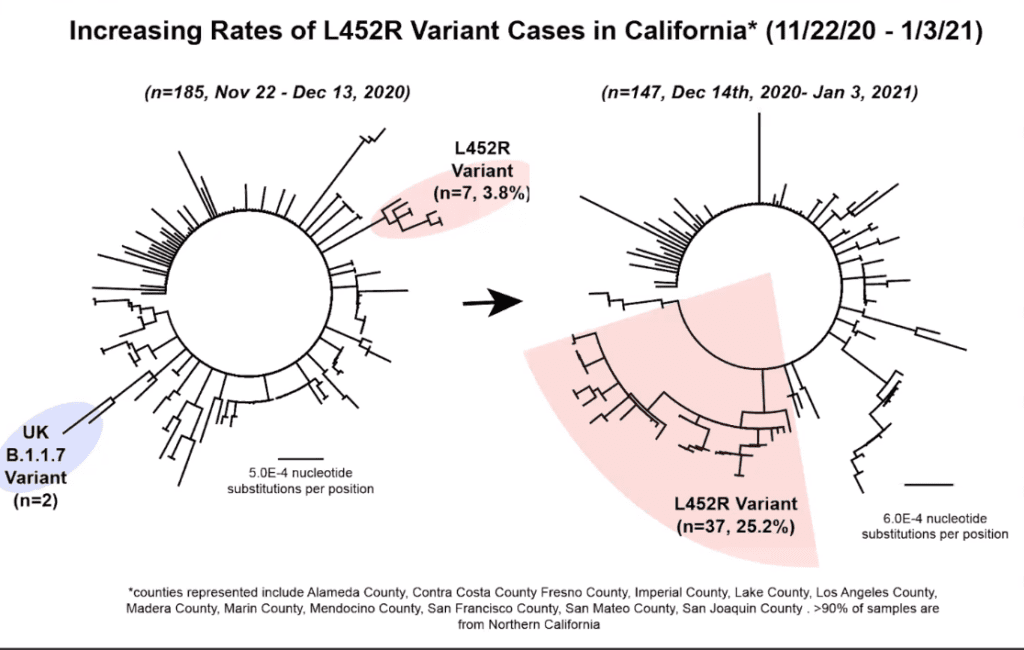 “Looking at more recent sequencing data, this is what initially clued us in on this particular variant. You can see the proportion of cases due to this new variant went up from 3.8 percent to 25 percent within less than a month,” he said. “This is why it is concerning that we have a variant that was pretty uncommon prior to early December that since then is now 25 percent of all the cases that we’re sequencing.”

The variant is showing up in a range of California counties — both urban and rural — but it’s not entirely new. It was first detected in Denmark in March and appeared in Alameda County in May. It has shown up in 13 other states.

Chiu said scientists are still trying to figure out the transmissibility of the variant and whether it is more infectious. The variant has five mutations, including L452R.

“Given the fact that it’s now a quarter of the cases that we’re seeing in California, maybe even more to the present, it is concerning that it may potentially be more infectious,” Chiu said, adding that there’s concern about the COVID-19 vaccine’s efficacy against the variant. “The data is preliminary, but it basically does raise the concern that there may be some impact on the vaccine.”

Cody said the sequencing process is not systematic and varies across the state. However, she added, Santa Clara County sent a large number of specimens from positive cases for sequencing. It has sent 1,500 specimens so far.

“Some of our larger outbreaks that have occurred, we have had those specimens sequenced and they are this variant that Dr. Chiu described,” Cody said. “We want to let the public know that we’ve had a large number of outbreaks and this variant has been identified in those outbreaks.”

“The takeaway is that this is a variant that’s becoming more prevalent,” Cody said, “and we need to lean in and understand more about it.”