Thousands of miles from detainment camps at the southern border, a row of young men and women sat in shackles on the steps of the Robert F. Peckham federal building in downtown San Jose.

It was all part of a rally on Friday dubbed “No More Cages, No More Deportations” organized by Services, Immigrant Rights and Education Network (SIREN), in which dozens gathered to denounce the reported abuse of migrants in ICE detention centers.

The shackles were supposed to represent what detainment feels like for those who have never felt it, said SIREN youth organizer Daniela Zopiyactle.

“I feel like a lot of people are immune,” Zopiyactle said. “They don’t see that it could be you.”

Speakers, however, shared stories beyond the reported abuses at the US-Mexican border. Storytellers, who were born across the globe, spoke of their experiences as immigrants in San Jose.

Julio Cesar Ortega, who identifies as an undocumented immigrant and resident of San Jose for more than 20 years, said he was held in an ICE detention center for six months after being arrested by immigration officials last year.

Ortega said he found representation through an immigrant rights group called Pangea, which led to his release from detainment, but it was difficult for his family to endure his absence. 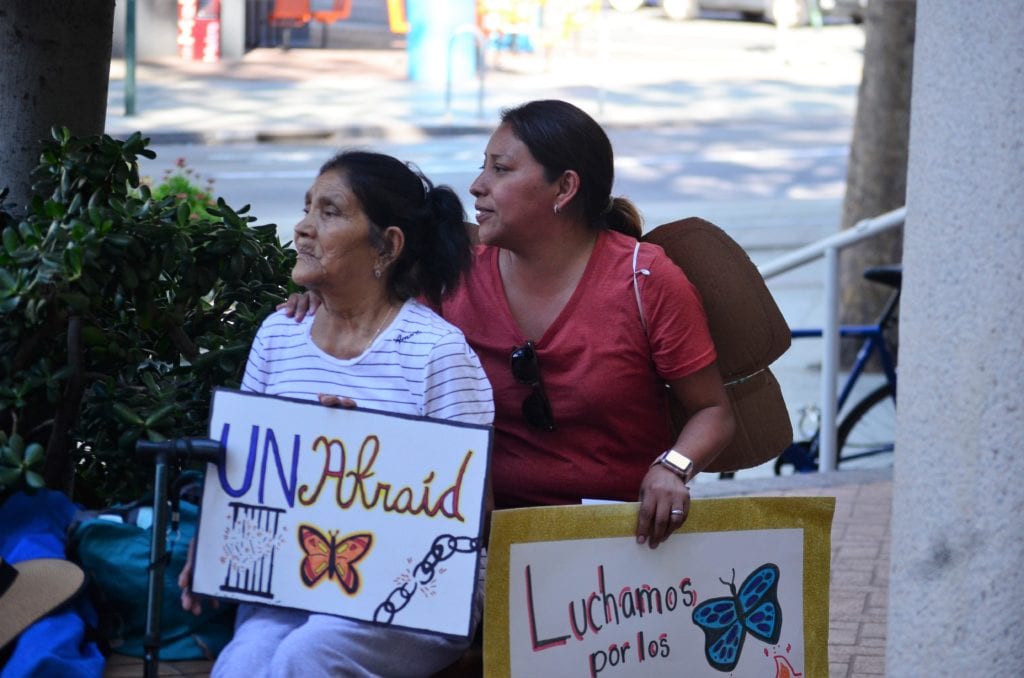 “They lost the apartment, cars,” Ortega said in Spanish, adding that he’s looking to gain more support from the South Bay community for undocumented immigrants and their families. “I want to serve as an example for them on why we fight.”

Other speakers, born in Asia and Africa, recounted the struggles they faced as immigrants in the United States.

“My mom always had to work . . . so from a young age we were free to do what we wanted,” said Phuoc Thang, a Vietnamese immigrant, who was born in an Indonesian refugee camp.

Thang explained that his mischief as a child grew from minor troublemaking to stealing and drug use, which led him to being arrested for dealing meth when he was 21 years old. After serving eighteen months in county and state custody, Thang said he was transferred into ICE custody for another six months.

“At least in county or state, we know we have a release date that we can look forward to,” Thang said. “In ICE custody, there is no set release date, they make it seem like you can be in there forever. I think it’s to make us want to volunteer to deport ourselves.”

Several other speakers shared their experiences, emphasizing how ICE detainment affects both children and adults.

“Youth really took the helm on this specific protest,” said Ambar Gonzalez, a youth organizer for SIREN. “Another important thing for us was also not just to focus on children — that’s important —  but a lot of times I think people forget how adults are affected.”

The rally followed President Donald Trump’s tweet threatening ICE raids on sanctuary cities across the United States and after numerous news reports of filthy conditions at Border Patrol facilities in Texas, including children sleeping on cold floors, being denied medical treatment and access to toothpaste and soap.

“We’re trying to achieve justice for our communities and we’re also fighting an administration that is using dehumanizing language against us, and criminalizing, detaining immigrants in detention centers,” said Katiuska Pimentel, a community organizing consultant for SIREN.

She added that the continued reports of abuse and constitutional violations are intensifying anxiety in the local immigrant community.

“This time it feels heavier because our communities are reliving the trauma everyday of their lives,” Pimentel said. “So we’re just trying to highlight that and ask for a systematic change.”