More than 134,000 signatures have been added to an online petition calling for the firing of San Jose Police Officer Jared Yuen, after he was recorded licking his lips while holding his rubber round gun and shouting expletives at protesters May 29.

Citing multiple videos of Yuen taken by bystanders on the first day of week-long protests in the Bay Area’s largest city, the document on thepetitionsite.com accuses the officer of shooting an unarmed, nonviolent protester and rushing the crowd. As of June 4, around 1,200 citizen complaints had been filed with the city against Yuen stemming from the incident.

this is officer jared yuen harassing and firing on unarmed protestors in #SanJose without provocation. why do you think folks protest, when PD acts like this? #ACAB #BLM @sjpdchief pic.twitter.com/bBAF5cMuWI

“Police officers are supposedly trained to deescalate situations and properly control their emotions,” the petition said. “We, the taxpayers and American citizens, demand that the San Jose Police Department investigate the numerous citations against Jared Yuen and critically examine his role in erupting peaceful protests into violence.”

The petition also detailed how former Minneapolis Police Officer Derrick Chauvin — who killed George Floyd by kneeling on his neck, sparking weeks of protests and unrest — remained on the force after killing a Native American man in 2006.

A six-year veteran of the department, Yuen is currently on desk duty while an investigation is underway, according to Police Chief Eddie Garcia. No charges have been filed.

Garcia also recently came under fire after he defended Yuen’s actions, calling him a “good kid who made a mistake, who let his emotions get the better of him.” Garcia later apologized for the comments but continued to defend the “use of force.”

“I don’t need to have five minutes of that video to tell you that it was unprofessional and that’s not going to be tolerated,” Garcia said at a news conference June 4. “But when you see force incidents where all you’re getting are the last five to 10 seconds, you can’t necessarily base everything on that. You have to look at the totality of what occurred in most cases.”

Police spokesperson Officer Gina Tepoorten said Thursday the department has not seen the petition, but hundreds of complaints have been received from “angry and frustrated” members of the public. She said Garcia shares those concerns, and an investigation and lawsuit are both underway into Yuen’s actions. 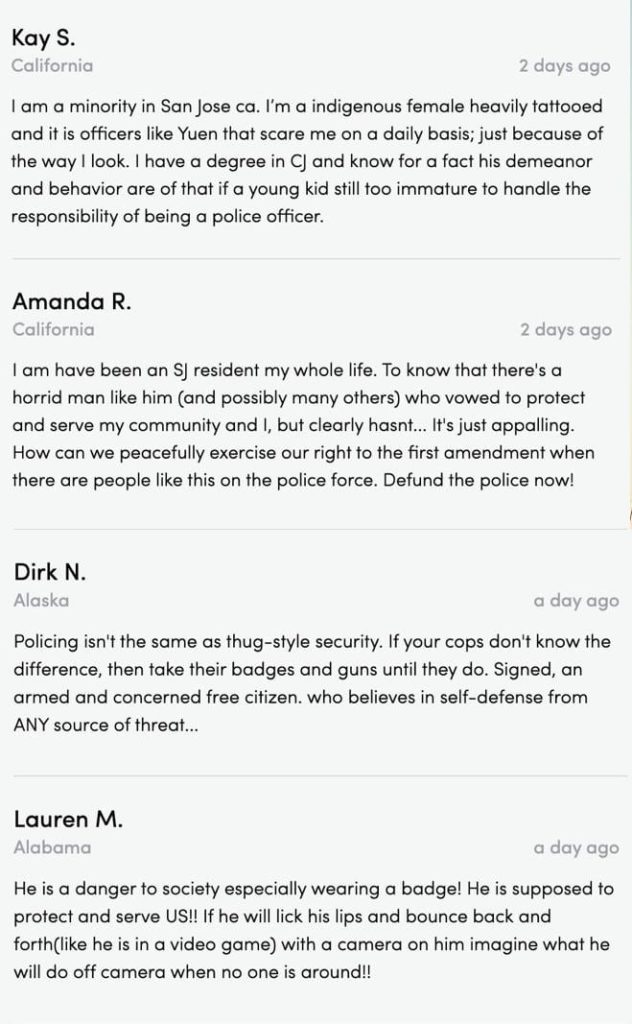 A slew of local petition signers also expressed support for the larger national movement to defund police, with many saying they fear for their personal safety if Yuen continues to patrol the city, while voices from outside the state and country have also signed the petition.

Similar petitions have popped up calling for the termination and discipline of other officers nationally, including nearly 1 million signers calling out Buffalo Police Department Officer Aaron Torgalski, who was filmed pushing an elderly man. The man fell, hit his head on the sidewalk and bled from his ear.

Conversely, more than 62,000 signatures as of Thursday called for Santa Monica Police Chief Cynthia Renaud to resign, asserting she didn’t do enough to stop looting and vandalism across the city.

In addition to the staggering 134,000 signatures in Yuen’s case, two separate change.org petitions have gathered nearly 19,000 and 5,000 signers, respectively.

San Jose got more than $200M in coronavirus aid. Now it'll have to up its expense tracking