San Jose elected leaders on Thursday called for a series of public hearings to address an alarming rise of reported rapes and sexual assaults in San Jose.

All five female members of the San Jose City Council — Magdalena Carrasco, Sylvia Arenas, Dev Davis, Maya Esparza and Pam Foley — gathered in front of San Jose City Hall on Thursday to denounce a sharp rise in rapes in San Jose, and to call on lawmakers to publicly address the troubling trend.

The number of reported rapes in San Jose has nearly tripled within the last ten years according to FBI data provided by the city, spiking from 220 in 2008 to 615 in 2018. 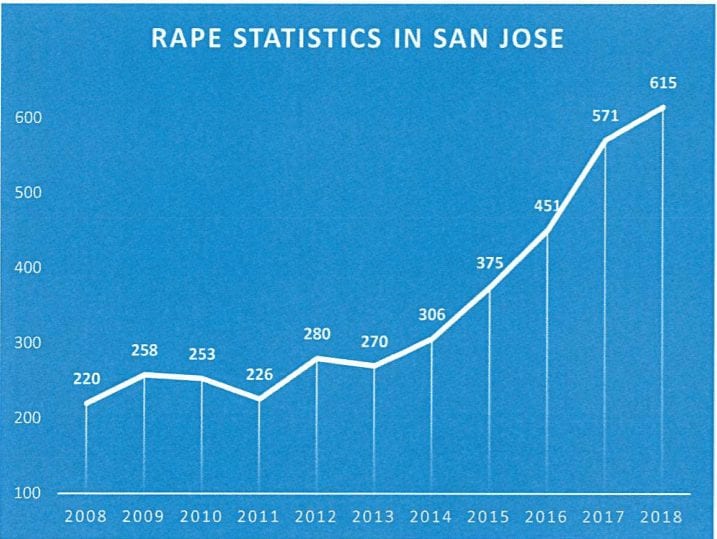 Those statistics track “rape” as defined by the FBI, San Jose leaders said, and exclude other forms of sexual assault and violence against women and children. The lawmakers added that clearance rates for sexual assaults have dropped to a rate of 6.7 percent this year — half the rate from the prior year.

A clearance does not mean attorneys have made a prosecution, San Jose officials said.

Arenas on Thursday announced a request for a $500,000 budget reserve for sexual assault system improvements and $250,000 for trauma-informed specialized training to examine patterns of abuse, treatment and prevention strategies.

Arenas said several local issues might have contributed to the rise in reports, such as overcrowding in homes due to a lack of affordable housing.

“The overcrowding in homes means some of that shared space is shared by three, four families and, you know, that always creates accessibility to children,” Arenas said.

Lawmakers said Thursday that children are often left out of the discussion on sexual assault, though nearly half of all female rape survivors were victimized before the age of 18. “A strategy on sexual assault that does not include domestic violence and human trafficking is not a complete strategy,” they wrote.

She also said the #MeToo movement has sparked an increased openness about sexual assault that could have motivated more people to report. However, the causes are still uncertain, and Arenas said her request would fund research to provide answers that could lead to systemic change.

Along with the budget request, lawmakers are proposing a series of public meetings to discuss the rise in sexual assaults, including a study session with the City Council in September and another joint meeting with a Santa Clara County Board of Supervisors’ committee to forge a partnership between the city and county agencies to deal with the issue.

They also requested a report from city administrators that looks at “process improvements” to address intersectional issues
of domestic violence and human trafficking, as well as to create a “sexual assault working group” between the city administration and the county executive’s office.

Several local advocates for survivors of sexual assault were on hand Thursday, including Devon Cable, a student from Santa Clara University, who is part of the school’s Violence Prevention Program.

Cable said she was “emotionally abused” by her boyfriend of 3 1/2 years but it took years to realize it.

“It started with little things,” Cable said Thursday. “I started no longer spending time with my friends because he felt unappreciated, wearing a shirt he thought was ‘asking for it’ from other guys, telling me I was being weird for being so confident when meeting new people and saying, ‘next time try to be a little quieter and keep to yourself.'”

The emotional abuse allegedly escalated to physical abuse when she started college, Cable said. “No one knew what he did to me behind the closed doors of those dorms,” she said. “He kicked me and held me down in his bed and didn’t let me leave the room. He would force me to do sexual things I had no intention of doing.”

Councilmembers said that the trend demanded an immediate response.

“It’s time for us to formulate an actionable plan to protect victims,” Davis said during a news conference Thursday.

Carrasco, who represents East San Jose and sits on a city public safety committee, said that the committee saw trends, but it was difficult to get reliable information.

“Now that we see the numbers as clear as day, it’s very troubling and it’s very concerning,” Carrasco said.

She pointed out that there should also be a focus on reported sexual assaults on people of color.

“We continue to see a rise in sexual assault in women of color,” added Carrasco. She said a large amount of rapes happen to young girls, and only 40 cases out of 716 rape cases were cleared this year. “We are demanding attention and an immediate response to the rise in violence against women.”

“As we track these alarming statistics, we must find the most efficient strategy to increase the clearance rate, convict those committing violence against children, women, and other vulnerable populations, and find a coordinated approach to the interrelated crimes of sexual assault, domestic violence, and human trafficking,” the lawmakers wrote in their proposal.

The proposal will go to the San Jose City Council’s Rules and Open Government Committee for consideration next week.