Op-ed
by Special to San José Spotlight
An aerial image of a part of the city of Santa Clara and North San Jose. Photo by The 111th Group.

The Mercury News published an op-ed Oct. 1 by Matthew Mahood, CEO of the Silicon Valley Organization, about North San Jose in which he accuses me of demonstrating poor understanding of the problems the area faces, being oblivious to obstacles for development, unable to get facts straights or articulate any solution.

Why these strong words? Because I, together with candidate for City Council candidate David Cohen and Santa Clara Unified School District board member Jim Canova, wrote in an op-ed on Sept. 23 that development in North San Jose has stagnated, something Mahood actually seems to agree with.

I appreciate Mahood’s response, his willingness to engage and his support in bringing attention to the complex situation in North San Jose. As for the personal insults he throws at me and my coauthors, I believe they are unnecessary because there is much we can easily agree on.

We wrote that there’s been little movement in NSJ in the last four years. Mr. Mahood reminds his readers that this is about how long incumbent Councilmember Lan Diep has been in office.

The issue, as Mahood writes, lies in the 2005 North San Jose plan. Or as David, Jim and I wrote: “The biggest hurdles to unlock more growth — both housing and commercial: a stubborn unwillingness to change the city’s 15-year old plan for North San Jose.”

Mahood lays out the difficulties resulting from a 2006 legal settlement between San Jose and Santa Clara regarding development and he calls out Santa Clara for supposedly not negotiating in good faith and being relentless in its opposition.

I agree the relationship between San Jose and Santa Clara is broken and needs repair. The settlement needs to be renegotiated and, yes, Santa Clara has been proven to be a tough opponent that’s aggressively pursued its own interests.

Unfortunately, sometimes in life that happens and if it does, one has a choice: One can retreat into an office on the 18th floor and complain or one could go out and put in the work of trying to understand Santa Clara’s interest, build bridges and find common ground.

In drafting our op-ed, we extensively discussed whether we should include the complicated settlement and relationship debate that Mahood accuses us of being oblivious about. Since we were limited to about 500 words, we had to make some hard choices about what to include and what to leave out. I’m sure Mahood faced a similar issue when he wrote his op-ed.

In the end, we decided to focus on looking forward, and we think proposing to bring a wide group of stakeholders together for a broad coalition that can transcend old conflicts and find new approaches is more helpful than spilling newspaper ink by hurling accusations at a neighboring city. As we put it:

The second flaw we supposedly missed and Mahood brings up is the North San Jose transportation plan that “imposes prohibitively steep fees on development to pay for $460 million in new roadway improvements.”

Again, we agree the expensive transportation plan is an obstacle to growth but as we weren’t able to find a reliable way to prove that particular link, we limited ourselves to arguing against the transportation plan from an environmental perspective, which is just as important:

“The transportation plan needs to be revised to prioritize public transit as well as people walking and biking. Currently, taxpayer money and developer fees continue to go toward building wider roads and bigger intersections, violating the city’s climate strategy and encouraging people to drive more and clog our roads.”

I want to thank Mahood for broadening the argument and connecting the economic dots.

On a personal note, the accusation of being oblivious to the NSJ Area Deficiency Plan is the most surprising of Mahood’s allegations. He seems unaware that over the past few years I personally have spent numerous, if not hundreds, of hours publicly fighting this plan and one of its project in particular: The Charcot Avenue Extension near Orchard School.

This past June, I, along with about 50 community members, urged the San Jose City Council to cancel or at least shrink down the Charcot Avenue Extension, one of projects that make the NSJ transportation plan so expensive. Yet, we were denied. The person most opposed to changing the North San Jose transportation plan? Councilmember Diep.

I don’t remember Mahood or the SVO speaking up at that meeting and supporting us in trying to change the very plan he is now criticizing.

We believe pursuing the NSJ plan is so wrong that we are now suing the city over the Charcot Extension project’s Environmental Impact Report. We are hoping this will not only change this one project but give staff the urgency to rethink the whole NSJ transportation plan.

In his closing, Mahood brings up that he has seen progress in North San Jose during Diep’s tenure, citing the examples of Nutanix, the expansion of Supermicro, Hewlett-Packard Enterprise, Bloom Energy and Broadcom. 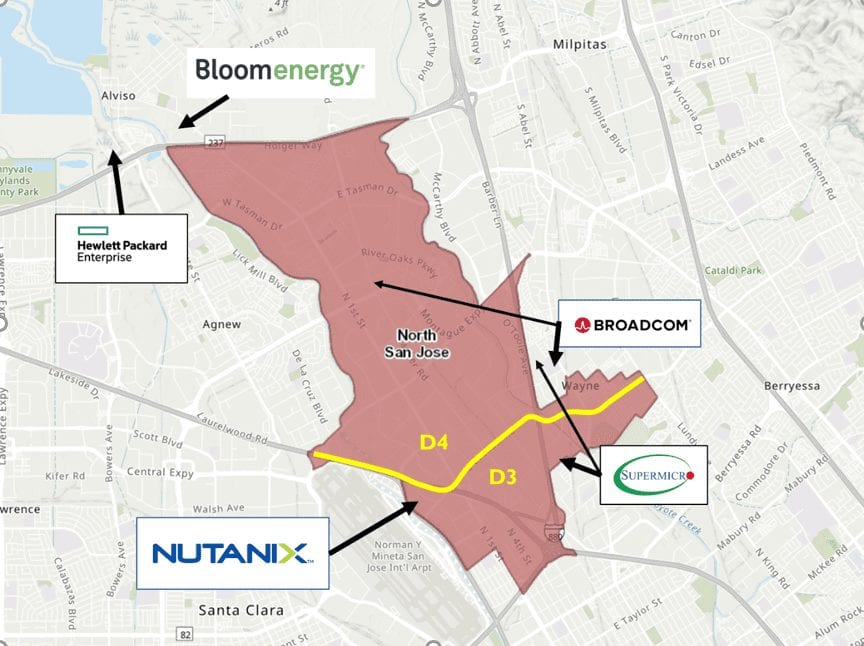 But according to Google maps, it seems that Nutanix and the Supermicro Expansion are in District 3, which is represented by Councilmember Raul Peralez, and that HPE and Bloom Energy reside just north and outside of what is the official North San Jose Planning Area that we are discussing.

In the end, of the five examples Mr. Mahood mentions, only one — Broadcom — seems to have offices in North San Jose, although its headquarters on Ridder Park is again just outside the NSJ planning area. Hardly impressive achievements.

In this council race, I’ve seen only one candidate willing to fight for what you and I want to see in North San Jose and that’s David Cohen.