San Jose lawmakers this month will weigh raising building heights up to 35 feet above current limits in the downtown core and up to 137 feet in the Diridon Station area, home of the proposed Google mega-campus. Allowing developers to build taller, city officials said, would rake in millions of dollars in tax revenue and revitalize the downtown skyline.

But several members of the city’s Airport Commission expressed alarm and concern. They worried that taller buildings would pose safety risks and could mean losing international air service. Those airlines would be forced to bump passengers to reduce their weight during inclement weather if one engine fails during takeoff, leading to potential economic losses for airlines.

City and airport leaders said they surveyed 18 airlines at SJC about the plan and received fairly positive feedback. But Airport Commission Chair Dan Connolly wants to see the results for himself. He requested a copy of survey responses from the airlines — and he was denied.

“Something really stinks about this. It’s not passing the smell test,” Connolly said Tuesday. “Let’s see what the airlines really had to say. If there’s nothing to hide, why does it seem like they’re hiding it?”

In the denial letter, officials from the city and Mineta San Jose International Airport claimed neither agency has copies of the survey results — despite paying a consultant nearly a million dollars to survey airlines and produce a study. 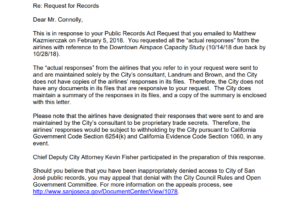 “The “actual responses” from the airlines that you refer to in your request were sent to and are maintained solely by the City’s consultant, Landrum and Brown, and the City does not have copies of the airlines’ responses in its files,” the letter read.

The city also claimed the results — despite being in the consultant’s hands — are considered “proprietary trade secrets” by the airlines.

Attorney David Snyder, executive director of the First Amendment Coalition, said both arguments don’t pass muster. San Jose is obligated to get the records from its consultant, Snyder said, and the city cannot determine something is a “trade secret” based on what a third party — the airlines, in this case — says.

“They can’t delegate their obligation to determine whether records have to be disclosed to someone else,” Snyder said.

“The airport agrees with the airlines that it’s proprietary,” Doyle said. “There’s no delegation here. Don’t forget that the airport does not have the records in any event.”

Snyder said it’s hard to believe that survey results related to changing a city policy could be considered a trade secret.

“Trade secrets are the formula for Coca-Cola or the source code for the iPhone,” Snyder said. “Stuff that would damage the abilities of a corporation or business entity. It’s hard for me to imagine how the responses would rise to the level of trade secrets. That’s not how this works.”

The First Amendment Coalition is suing San Jose over nondisclosure agreements 18 officials signed with Google as the tech giant negotiated buying more than 20 acres of public land to build a massive campus.

Similar to the rejection of Connolly’s request, Snyder suspects the city allowed Google to declare what is confidential — instead of letting the city, a public agency, to decide.

“The company doesn’t get to define what gets to be published,” Snyder said.

Connolly is considering appealing the city’s denial of his records request.

“How is council supposed to make a decision when they can’t see the actual responses from the airlines?” he said. “I don’t think that’s an unreasonable request.”

The City Council will vote on the plan to raise building heights at its Feb. 26 meeting.