When San Jose Mayor Sam Liccardo quietly formed an advocacy organization last year, he insisted it would only weigh in on “common sense” policy issues.

Eight months later, he launched a political action committee (PAC) and raised hundreds of thousands of dollars before stepping away. Now Liccardo’s two organizations are deeply intertwined and linked to some of this election cycle’s most vicious attack ads against local candidates. It’s unprecedented to have a sitting mayor intervene so heavily in an election in which he’s not on the ballot.

Liccardo formed Solutions Silicon Valley in February 2021 to sway public policy and advocate on issues like reopening schools amid the COVID-19 pandemic and water rate hikes. Then in October that year, he launched Common Good Silicon Valley, a PAC that his closest confidants promised would not engage in “slash and burn” negative campaigning. 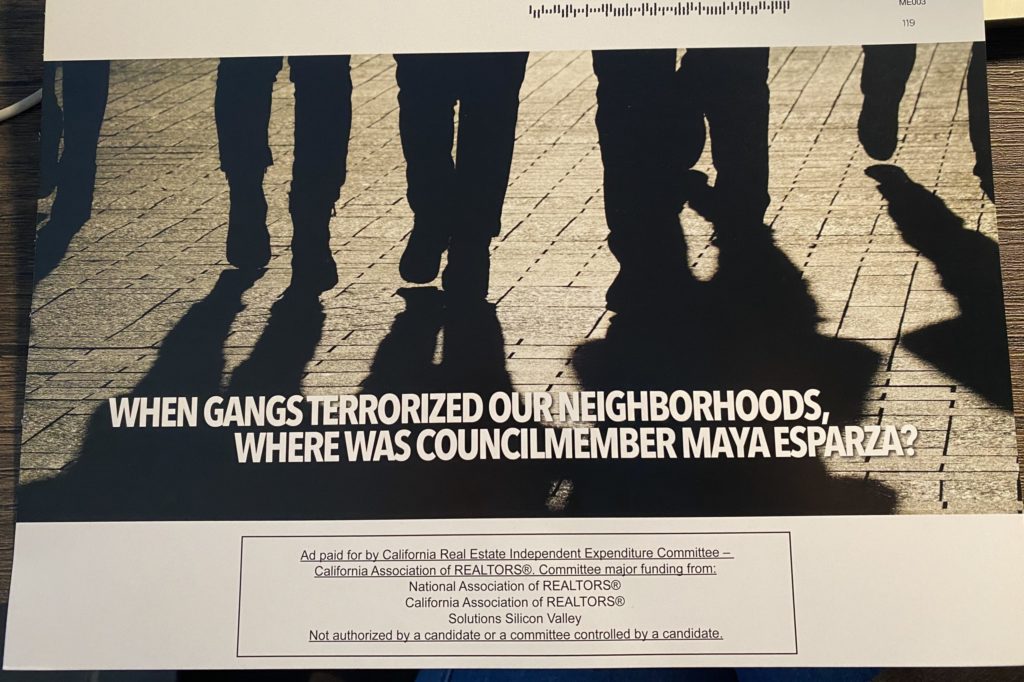 At least one mailer against Esparza featured a black-and-white photo with the image darkened. The others showed an altered photo of Esparza holding a check, with a banner that said, “She took the money and ran…” claiming Esparza missed four council votes on gang prevention, affordable housing, utility rates and corruption at City Hall between 2019 and 2022.

Darkening a candidate’s face is a racist campaign strategy used by the now-defunct Silicon Valley Organization PAC. That PAC dissolved in 2020 after it posted a digital ad of Black people on the streets of South Africa with the caption, “Do you really want to sign on to this?” The organization has since rebranded to the San Jose Chamber of Commerce.

Esparza said it raised questions when she saw “Solutions Silicon Valley” listed as a donor of her attack ads.

“What is disturbing is the lack of transparency and the same SVO tactics that were used before,” she said, referring to the darkened image.

The mailers against Chavez attacked her support for policies designed to depopulate jails, blaming her for a rise in crime.

Solutions Silicon Valley, a 501c(4) nonprofit, says on its website that it’s “not a PAC,” and it cannot contribute to candidates or engage in political campaigns.

A review of campaign finance records shows Common Good Silicon Valley, the mayor’s PAC, shared polling and research with the realtors’ political action committee—costing about $50,000. That’s considered major funding that requires disclosure. The mayor’s PAC is sponsored by Solutions Silicon Valley—which is why its name appeared on the four attack mailers.

A series of text messages sent this past weekend from the mayor’s groups attacked Chavez’s record and “wasteful policies.” The messages, paid for by Common Good Silicon Valley sponsored by Solutions Silicon Valley, blamed Chavez for “skyrocketing” homelessness and the release of criminals. Common Good has spent nearly $190,000 in October on texts boosting Mahan’s campaign.

Liccardo’s chief of staff Jim Reed, as well as a spokesperson for the realtors PAC, reiterated that Solutions Silicon Valley didn’t pay for the negative mailers.

“We (shared our results) so those partnering organizations could decide whether they wanted to pay for their own, or just use ours and not have to reinvent the wheel,” Reed told San José Spotlight.

Liccardo stepped away from the PAC earlier this year. The PAC and his nonprofit share one address on The Alameda in San Jose.

Gina Zari, spokesperson for the realtors PAC, said state law requires disclosing a PAC’s sponsor, such as Solutions Silicon Valley, not the name of the PAC itself. The law aims to create more transparency on who is influencing elections, but Zari said it’s created more confusion.

Common Good Silicon Valley has no say on the negative ads from the realtors PAC, Reed said.

Esparza refuted claims in the mailers that she’s missed important votes. She touted her efforts to secure funding for gang prevention and champion Measure E, which helps fund affordable housing. Esparza said the mailers appear to make up the two other claims because she didn’t miss those votes. The realtors PAC has doled out more than $100,000 to attack Esparza, but it hasn’t filed all campaign finances as required to the city.

“If the realtors had filed all their paperwork to be transparent,” Esparza said, “then we’d know what they’re doing.”