Some political insiders say it could rival lobbying and fundraising activities of the Silicon Valley Organization, the area’s largest chamber of commerce which has lost business members and dissolved its PAC following a scandal last year over its use of a racist campaign ad. The now defunct PAC had once helped fundraise for Liccardo and many of his allies’ campaigns.

But Liccardo, who would only answer questions via email, declined to elaborate on the new organization’s role, its funding or mission. He sent a vague statement simply saying the group will work on “common sense solutions.”

“Solutions San Jose is an advocacy organization we are starting to help unite San Jose residents around common sense solutions like re-opening our public schools as safely and as rapidly as possible,” Liccardo said in the statement Friday.

It is unclear when the group was launched, but it has already sent two mass campaign-style emails in the last 24 hours.

The first message — titled “A message from Mayor Sam Liccardo” — asked recipients to sign a petition to re-open San Jose schools, saying the continual closure of schools during the pandemic has created a “separate and unequal” education system. The email uses Liccardo’s name but came from [email protected]

“High-income parents can work from home, send their kids to private schools, hire tutors, create learning pods, buy extra internet bandwidth and help their children succeed in scores of other ways,” Liccardo wrote in the email obtained by San José Spotlight. “Our low-income students — despite the City spending more than $10 million to provide broadband connectivity to tens of thousands of homes — struggle with little other support and fall farther behind, while their parents must either work outside the home in essential jobs, or forego their paychecks. We need to end the social injustice of closed public schools. Now.”

Nearly 2,400 residents signed the petition in less than 24 hours. So Liccardo’s new organization sent out a second email blast titled “Can you help keep up the momentum?”

“This is just incredible,” the email began before encouraging recipients to forward the petition to reopen San Jose schools to their networks and share on social media.

“The response to our call has been overwhelming so far,” Liccardo wrote. “Let’s make sure they hear us at every level of government — the time has come to re-open our schools as fast as is safely and humanly possible.” 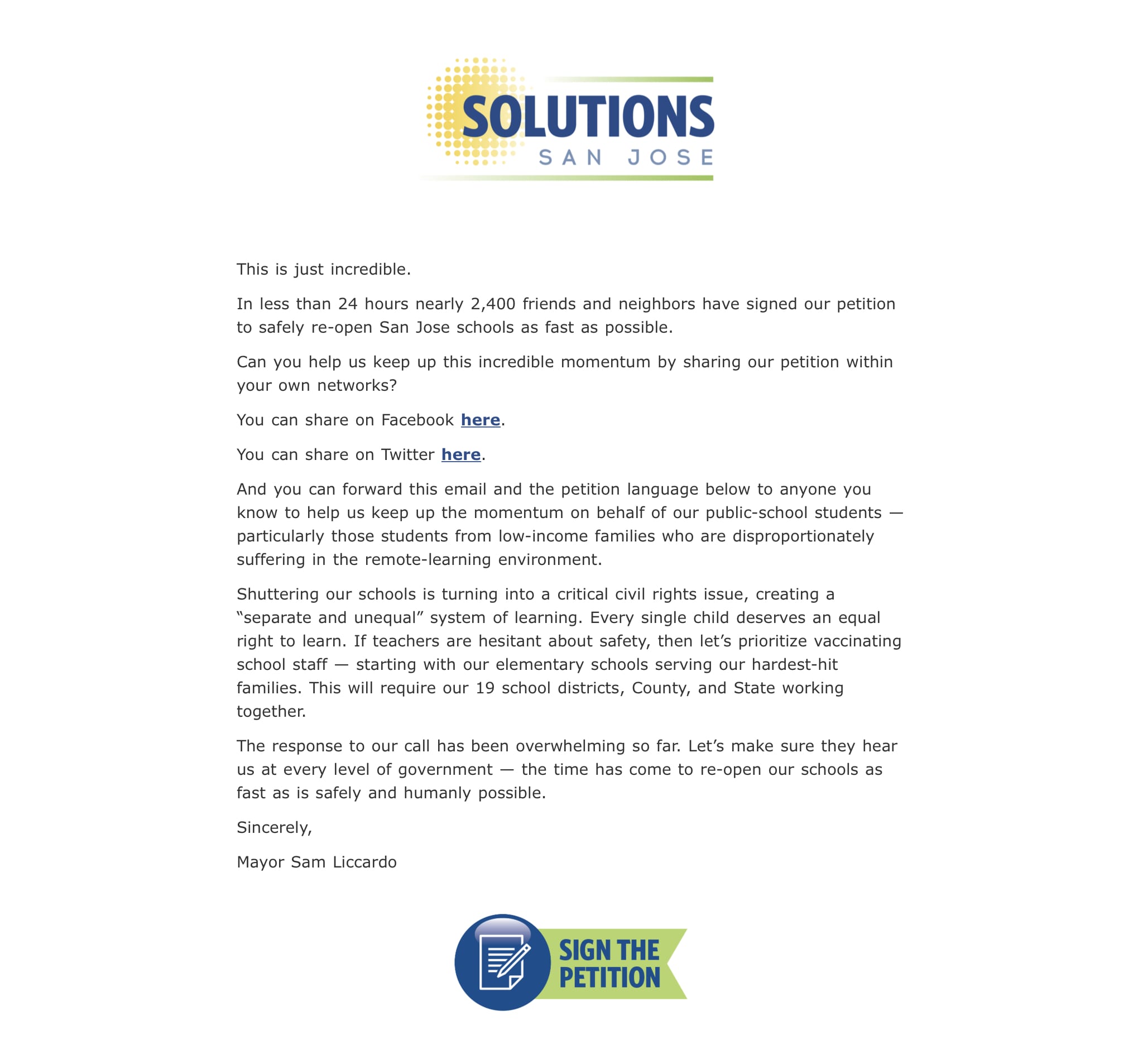 The bottom of both emails contains a San Jose address previously used by Liccardo on other political campaigns.

The address, 1346 The Alameda #7-191 in San Jose, was once used to collect donations for the mayor’s reelection campaign and the Yes on C, No on B “Stop the Sprawl” campaign, both of which were on the ballot in 2018. The Yes on C, No on B campaign was an initiative that opposed Measure B, which would have allowed luxury senior housing to be built on rural land in San Jose.

Some speculate the advocacy organization could eventually launch a PAC — now that SVO’s PAC is gone — and help fund Liccardo’s next political campaign. The mayor terms out in 2022.

Bob Linscheid, interim CEO of the Silicon Valley Organization, confirmed some of the group’s business members received the emails.

Linscheid said he has no idea what Solutions San Jose’s purpose or future plans are.

Even if Liccardo’s new group competes with The SVO, Linscheid said he won’t see it as a threat.

“While we like to consider ourselves the voice of business, we know there’s other voices so we don’t look at it as competition,” Linscheid said.

Former San Jose Councilmember Johnny Khamis, often a Liccardo ally, said he knew the mayor was trying to create an organization to “do good” in the city. Khamis said he didn’t know whether Liccardo intended to advocate for businesses or form a PAC, but said a void was left after the SVO’s downfall.

“There’s a big vacuum for kind of a moderate, non-union voice out there,” Khamis said. “The SVO has been put out of commission and nobody’s standing up for the little guy, the small business owner, the schoolkids … I totally agree with his statements about getting kids back to school.”

Liccardo approached Khamis last week to ask if he could recommend anyone to hire to work for Solutions San Jose. Khamis said he recommended one of his former staffers, but the discussion didn’t go any further.

He believes Liccardo started the organization to achieve goals that may not be possible using his mayoral title alone.

Hazard pay is coming to San Jose for grocery workers