Nearly 100 student athletes crowded a small auditorium early Wednesday morning, half-asleep and slouched in their seats, as their coach barked at them to pay attention. A string of police officers — both in and out of uniform — stood watching in the back of the room.

“Lots of times I think about the police the same way I think about God,” said head football coach Brent Brennan. “I seem to pray a lot more when I’m in deep (crap).”

The heads of the players bobbed up, straightening themselves upright. The room quieted.

“They’re the same,” continued Brennan. “You don’t think about them until you have a problem.”

The team of college football players from San Jose State University sat patiently as their coach pumped them up, before San Jose Police Chief Eddie Garcia took the lead. The two-hour meeting between police officers and the athletes, he explained, was more than a recruitment effort but also an exercise in creating more trust and improving police-community relations among people of color.

“Success is not a destination — it’s a journey. It’s in the ‘doing’ that there’s an outcome,” said Garcia. “We always have to continue to try harder. We are never going to be that perfect department, but we always have to try. That’s what our goal is.”

The diverse group of athletes from all over the country participated in a live, anonymous survey, answering questions about the police’s current relationship with people of color in America, what tools police officers could use to help build trust and their role as athletes in discussing policing, before breaking into smaller groups to talk to police officers directly about those questions.

In one group, four students and three officers — two sergeants and one lieutenant — gathered in a room to talk. After introducing themselves and shedding light on their upbringings, the officers asked the players — one white, two African-American and one Samoan — about their encounters with police. 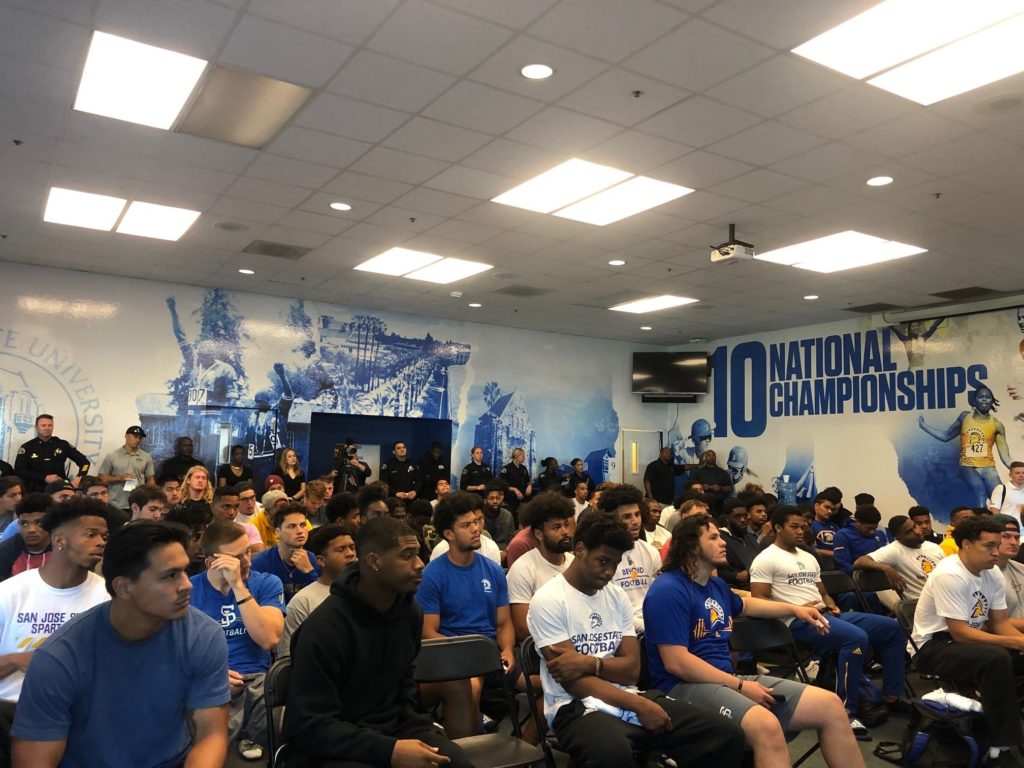 The players and the police officers shared many similarities — coming from working class backgrounds, experiencing harassment and having family members who worked in law enforcement.

Sergeant Christian Camarillo, a single dad with two kids, came from a strict family in a rough neighborhood. While he prides himself in being a police officer, Camarillo said he doesn’t let the job define him.

“A lot of times people only look at us from the neck down — just the uniform. They don’t even know who I am without the uniform on,” said Camarillo. “But we’re all normal dudes when we leave. I have a job — but that’s not who I am.”

One player, Tre Webb from Riverside, said two of his family members were in law enforcement– his father a sheriff in San Bernardino County and his grandfather was a former chief of police in Compton.

Webb understood the troubled relationship African American men have with law enforcement, even within the ranks of a department itself. After his father was almost convicted in a trial for shooting a Mexican man during an alleged assault, Webb said his father was ostracized and blamed by his colleagues.

“During the trial, the police department shunned him. When these white cops get convicted, they’re like all defensive of the cop,” said Webb. “But it wasn’t like that for my dad. He had to do it all on his own.”

But Webb was reminded by Lieutenant Todd Trayer, a recruiter for the department, that Webb’s experiences made him a great fit and role model.

The police department needs to recruit around 150 to 200 new officers a year, said Trayer. Unlike some other departments, San Jose requires police officers to have two years of college and be at least 21 years old. The department still falls short of meeting staffing requirements, having one of the “most thinly staffed police departments” of a major city in the country according to the city’s webpage.

Still, Webb said, he never wants to become a cop.

“Some police just don’t want to get it,” he added. “They have this already perceived thought process of people of color and there’s no way around it except getting those cops out.”

After the group sessions, 90 percent of the football players reported feeling that SJPD was “better than other departments.”

Chief Garcia said the diversity in the room of athletes would benefit the police department. More representation helps create trust and stronger bonds in the community, added Garcia, but it also changes the culture for the better.

“Diversity is not easy to get, we have to go out and find it. It would be fantastic if they thought of us after their football careers,” said Garcia. “I don’t think we’ve ever had a bad culture, I just think we had to take that next step in terms of outreach.”

But outreach and recruitment aren’t enough. Garcia said he’s implemented new policies to tackle some of the systemic problems police departments across the nation are being criticized for. Some policies include training on de-escalation methods, implicit bias and procedural justice, allowing for religious exemptions in uniform, and teaching the negative history of law enforcement.

But some leaders in the community were not convinced.

“Even in good faith efforts, the relationship between officers and the community is still problematic,” said Jose Valle, a community organizer with Silicon Valley De Bug.

Recently, Garcia has faced public backlash from immigrant rights groups and the undocumented community after he said that the county’s sanctuary city policy should be changed following the murder of Bambi Larson, a woman allegedly killed by an undocumented immigrant.

Valle, a longtime Chicano from East San Jose, said that diversity and representation is not sufficient in addressing the change that’s needed at the structural level or to stop the killing of people of color at the hands of police.

“Sometimes, when someone is able to rise in the classes they look down on those at the bottom,” said Valle. “I’ve been targeted, mistreated, and even beaten by Mexican officers more than white officers. Even a Mexican officer could have some sort of racial or class bias.”