In response, the San Jose Police Officers’ Association spent close to $100,000 on ads and messaging to defeat Tonkel, and sent an email to “educate” its 1,100 members on the candidate’s agenda.

Tonkel, who is facing off against incumbent Councilmember Dev Davis, says the email mischaracterized his activism as anti-police bias and accused him of promoting hate.

“Our District 6 race alone might see almost half a million dollars by the time this is over against me or in support of Dev and, absolutely, it has an impact on voters,” Tonkel told San José Spotlight. “I’ve gotten emails saying, ‘Jake, why do you hate police officers?’”

The police union spent some of the nearly $100,000 on “research” and a website claiming Tonkel supports 15 tax increases that would “shrink your paycheck.” Tonkel says it simply isn’t true.

Tonkel admits he’s been active at rallies calling for more transparency in San Jose’s police department and that he often posts live videos on his campaign Facebook page.

In one instance, Tonkel posted a video of protestors on June 27 holding up signs with the acronym ACAB, which stands for “all cops are bastards.”

The police association sent the link to its membership, along with a few choice words. The email is signed by Paul Kelly and Sean Pritchard, respectively the president and vice president of SJPOA.

“Jake Tonkel’s message is that ‘All cops are bastards,’” the newsletter read. “He chose to film that hate speech and to post it online, that tells you about his judgment and how he feels about police officers.”

While the candidate was among other protesters who derided police, Tonkel said he never personally spoke ill against San Jose officers and the ACAB sign was just one in dozens of signs he filmed.

“My role as a member of our community is to be supportive of people who are trying to make this world a better place, and are focused on racial justice,” Tonkel said.

He said he attended the rally in counter-protest of an anti-Black Lives Matter event. On the same day, Tonkel released a statement calling for an investigation of a private Facebook group where former and current San Jose officers posted hateful comments, including, “Black lives don’t really matter” and “I say repurpose the hijab into nooses.” Tonkel condemned the posts calling the officers’ behavior unacceptable.

He said his campaign is simply looking to increase accountability for officers who do wrong by the public.

“I know we’ve got officers that do a great job and we want to make sure we’re there to support them, but we also need accountability for the ones that don’t,” Tonkel said. “That’s really more of the frustrating piece … when we’re looking at the San Jose police officers union picking sides to try and elect a candidate or not elect a candidate based off of what they think is going to get them increased accountability measures.”

“What we’re learning is that it may have been literally a couple officers on (the Facebook group),” Saggau said. “And (Tonkel) was calling for their heads. But he can go film a vile, hate-filled message where he’s calling everybody, including our female police officers, bastards?”

The union also said in its email Tonkel shot the video at a protest in front of Davis’ house and her children were home and “obviously scared by the aggression.”

Protesters did rally by Davis’ house but Tonkel said he left early because he felt protesting at the councilmember’s home crossed a line.

Saggau said whether or not Tonkel was at Davis’ house, the candidate still made a statement by posting the video online.

“When you film those things and you don’t put an editorial disclaimer or say, ‘these are not my beliefs,’ sorry, you own them,” Saggau said.

Tonkel told San José Spotlight he is not anti-police. He does, however, want to have a greater discussion about which police calls may be more appropriately handled by civilian professionals. For example, a mental health professional might be able to resolve a situation better than a police officer assigned to diffuse disruptive activity in schools, Tonkel said.

The police association and some Davis supporters say Tonkel wants to cut the police department budget by 80%. Tonkel said he has no plans to eradicate police jobs or slash the budget to that extreme.

In previous interviews, Tonkel has declared his support for a Green New Deal which calls for a reduction in police budgets. Green Party presidential candidate Howie Hawkins said in a recent news release that cutting police budgets down to the 20% devoted to dealing with violence would still not leave enough savings to “repair damages” caused by discrimination. 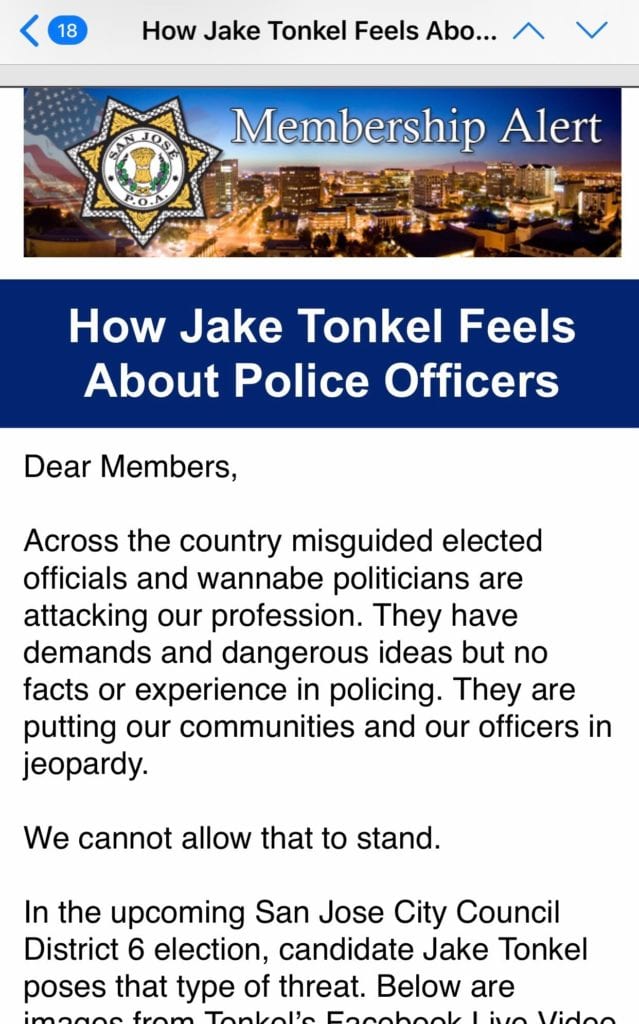 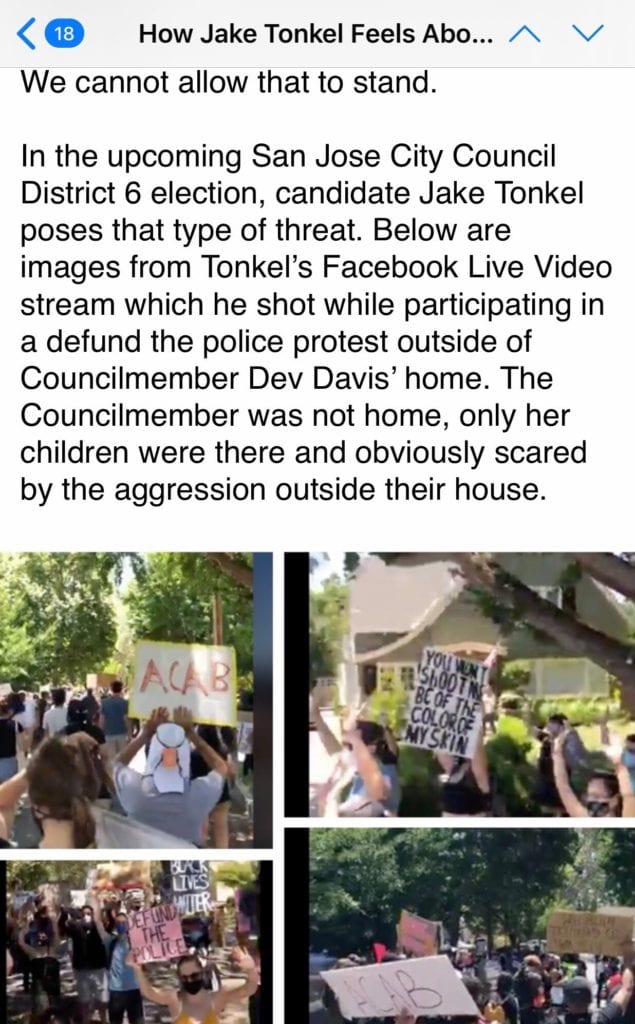 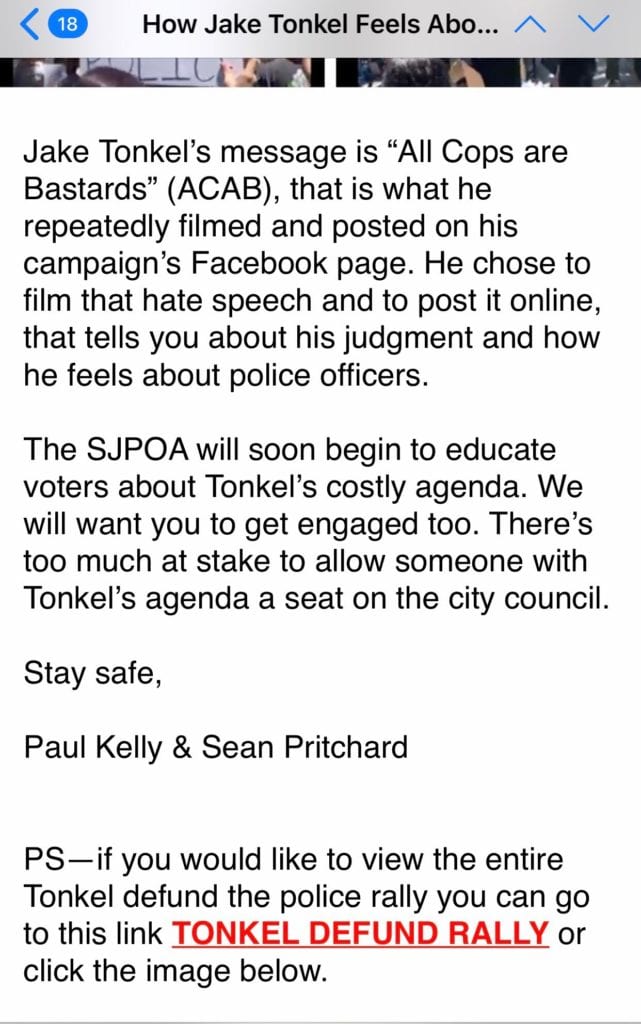