“Today we are here to stand in solidarity,” said Elsa Salgado, president of the university’s Student Homeless Alliance.

Salgado was speaking about a growing population of homeless students, the struggles they face to keep up with their studies and a feeling that the campus administration wasn’t doing enough to help them.

The student activists expressed disappointment that only six students were provided with emergency housing on campus last year. A total of 189 students had reached out to the campus program known as SJSU Cares, according to this news organization’s reporting, for help on a variety of matters related to housing or food insecurity with 84 seeking resources specifically related to housing resources.

Administration officials say they cannot report on how many of those 84 students were asking for housing on campus, but only six were housed in the past year.

In a statement released by the administration Wednesday, university officials claim that every student who requested housing and homeless resources “and remained engaged with SJSU Cares” was helped. The officials say that not every student is interested in living on campus and help was provided in the form of grants and loans.

But the students late Wednesday released a string of emails that appear to show a student who reached out to a high-level university official for help renting a dorm room was denied. The student reported sleeping “outside or (in) the library.”

“Unfortunately, we do not have anything available, not even emergency housing,” the SJSU official responded in the email, before directing the student to check an off-campus housing website.

When the student asked if there is an “emergency room” available, the official told the student the school does not have any space in its apartment buildings and the student can apply for a unit — but there are eight females ahead on the waiting list.

“So I have no idea when a space would be available, if one even opens up,” the official concluded. The names of both the homeless student and SJSU official have been redacted. 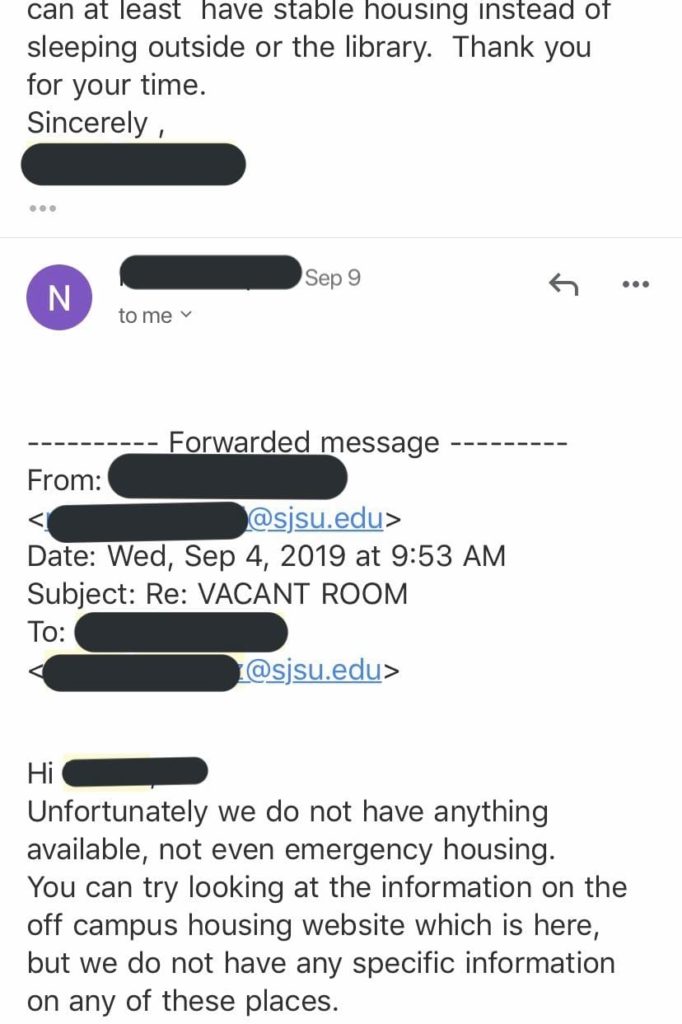 On Wednesday, San Jose State University student Maggie Young said she was among the 84 looking for help with housing. Young, a  mother of two children under the age of six, was dealing with long commutes and shared housing to make ends meet. When she asked SJSU Cares for family housing on campus, she says she was laughed at.

“When I went to ask for help and how to get into family housing I was chuckled at and was told that I was not the model student and that I wouldn’t want to raise my children on campus anyways,” Young told the crowd on Wednesday.

Young ended up finding a converted garage for rent through word of mouth about 10 miles from campus.

“I’m optimistic about my situation,” she said. “I cannot speak for everybody else. Students will continue to double up and triple up, sleep in cars and the library.”

Wagers founded SHA in 1992, a time, he said, when there were no homeless students and efforts were focused on the general homeless population that was living along the creek beds. Wagers encouraged the students to stand up for their rights and those of others.

“Young people doing nothing wrong but pursuing their goals cannot afford to live in decent sanitary housing,” he said. “Be a Martin Luther King, be a Mother Teresa be a Cesar Chavez. Be one that stands up for the best in this nation not the worst.”

Moore expressed outrage that the administration wasn’t doing more to help its students and said he would call the university president after the event to demand that she speak with the students.

“I’m going to demand right away that San Jose State and the CSU system address this homelessness issue across this state,” he said.

The students have their own demands. They want the administration to offer emergency grants of up to $4,000 to help prevent students on the verge of homelessness, subsidized rent for previously homeless and extremely low-income students and dedicated housing in new facilities as well. They also want to see the definition of homelessness broadened to include couch surfers, people who sleep in their cars and individuals living in hotels. Loans should be part of the equation, too, they say, but only after housing and emergency grants have been offered.

The students are planning to host a statewide conference at San Jose State on Nov. 22 and 23 and are inviting other colleges and universities across the state to join the discussion on student homelessness.