When Chappie Jones was growing up in a redlined neighborhood in Sacramento, his role models were Black elected officials like Maynard Jackson and Harold Washington — the first Black mayors of Atlanta and Chicago, respectively.

Today, he’s creating a legacy of his own by beginning his second term as vice mayor of San Jose.

As second-in-command at City Hall, Jones’ duties include leading council meetings and handling ceremonial appearances in the mayor’s absence, as well as working closely with the mayor to develop policy initiatives.

The reappointment didn’t come as a surprise to Jones, who has been a close ally of Liccardo over the past six years and has often voted in agreement on many of his policies. But it was a change in pace for Liccardo, who has switched two vice mayors in his first term in office — starting with Rose Herrera in 2015 then Councilmember Magdalena Carrasco for two years, starting in 2017. When stripping the title from Carrasco, the mayor explained he wanted to rotate vice mayors every two years, although that doesn’t appear to be the case with Jones’ reappointment.

He chose an ally in Herrera but a political rival in Carrasco, an unsuccessful attempt to win her over to his voting bloc. Liccardo today has lost his 6-5 council majority after Councilmember David Cohen ousted Lan Diep in District 4 last November.

Jones, who represents the District 1 area of West San Jose, was elected to the San Jose City Council with close to 60% of the vote in November 2014. He ran unopposed for a second term in 2018 and is set to complete his tenure on the City Council in 2022.

Over his two terms on the dais, Jones focused on advocating for underserved communities and supporting the development and survival of small and minority-owned businesses.

In 2016, he launched Project Hope in the Winchester/Cadillac neighborhood with the goal of empowering underserved communities, developing a cleaner and safer environment for residents and connecting communities to city services.

“That program was initiated four years ago, and it’s been successful to the point where they have rolled it out to other council districts and other neighborhoods,” Jones said. “I’m going to focus on making sure that program expands, it grows.”

Jones plans to focus his last two years on the council on supporting the Small Business Advisory Task Force — which he established in 2018 to provide policy recommendations from the small business community to City Hall — as well as spearhead a roundtable discussion to involve the community with the city’s solutions to homelessness.

But Jones is most excited about a pilot My Brother’s Keeper program at Oak Grove High School, which will address pervasive opportunity gaps in the African American community by providing mentorship and resources to boys between the ages of 14 and 16.

The pilot program — based on the national program launched by President Barack Obama in 2014 — is set to launch in the next two months.

“Knowing the relationship between public policy and economic empowerment and equality, I’ve been able to pursue policy initiatives to address that,” Jones said. “I’m really proud of what we have accomplished so far, but we have a long way to go. The goal is to see economic opportunity flow to our underserved communities.” 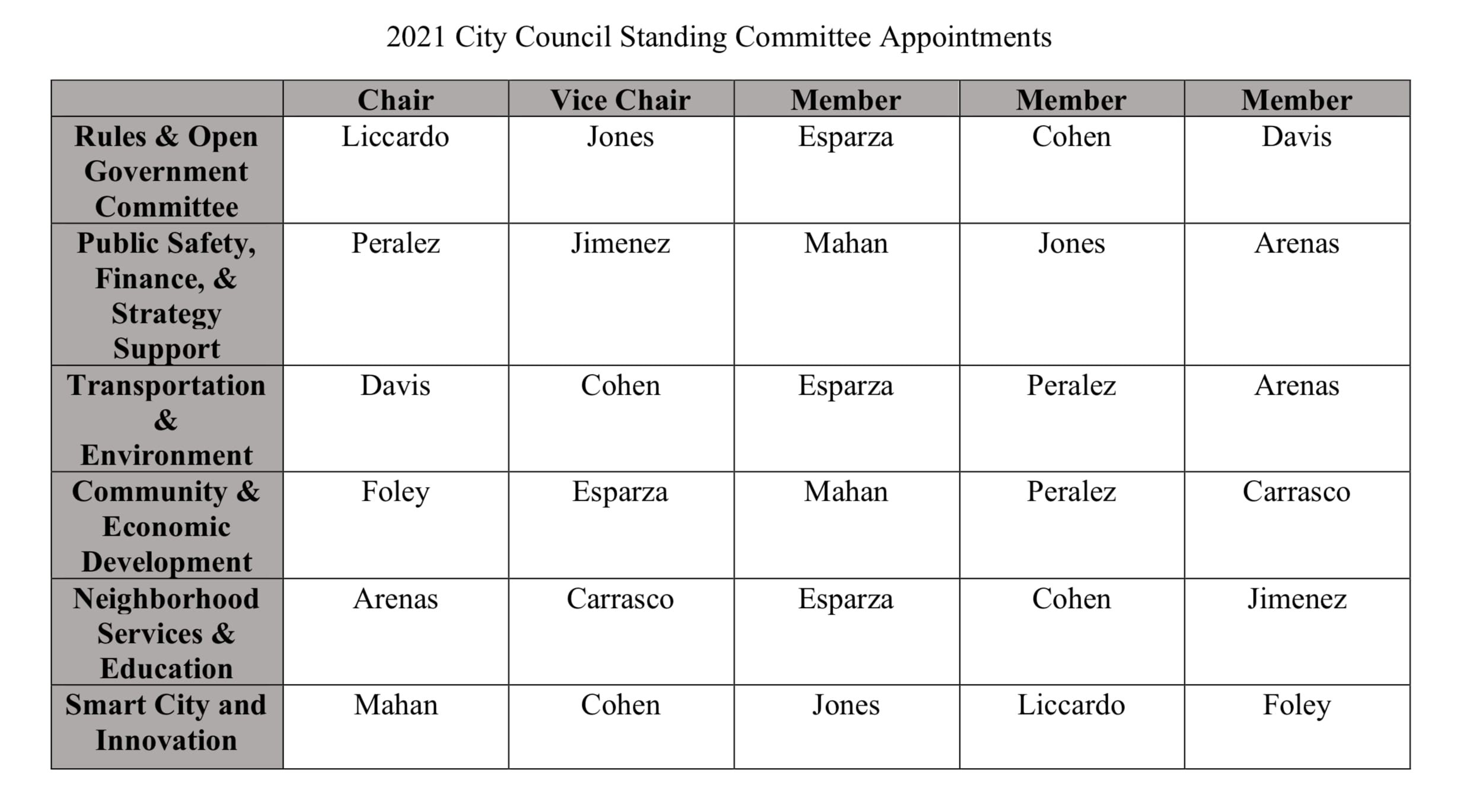 The council deferred Liccardo’s committee appointments — usually a ceremonial process with little controversy — to next week.

Esparza stressed the importance of ensuring the committees equitably represent the diversity of the city. She proposed all appointments be deferred until Jan. 26 to give councilmembers time to publicly discuss and possibly dispute any of Liccardo’s picks.

“I’m not looking to create chaos,” Esparza said. “But … we benefit from having this discussion in public that we otherwise would not be able to have.”

The council, however, unanimously appointed members to regional bodies such as the VTA Board of Directors because those committees have strict upcoming deadlines. The VTA board, for example, has to approve its 10-year Measure B funding plan next week.

Councilmember Sylvia Arenas was tapped to serve on the VTA board, but declined. She’s recovering from a recent COVID-19 diagnosis and doesn’t have adequate child care for her children due to the pandemic. Instead, she passed the torch to Councilmember Magdalena Carrasco.

Cohen said allowing councilmembers to review and publicly discuss key committee positions is crucial for good governance — especially because the city’s Brown Act limits the council’s ability to privately discuss who is being appointed to what committee.

Cohen also said in the future the city should consider letting committees choose their own chairs and vice chairs, instead of allowing Liccardo to do it.

“Most public agencies that I’ve seen when they are rearranging themselves every couple years … they do it publicly,” Cohen said. “They do it with an open discussion about who is going to serve on what committee.”

City survey: What do you want to ask San Jose's next police chief?