HomelessnessSanta Clara
by Eli Wolfe
A glimpse of the safe parking site at 71 Vista Montana in San Jose, which the city made available to homeless residents cleared from a homeless camp on a piece of Apple property. Photo by Vicente Vera.

Backlash over a safe parking site in San Jose for the homeless has bled into a neighboring city.

Santa Clara Councilmember Kathy Watanabe took to Nextdoor earlier this month to share an email she sent to San Jose Councilmember David Cohen. The email blasts a safe parking site at 71 Vista Montana for homeless people — who were swept from an encampment on vacant land owned by Apple — to park their RVs and cars. She cites concerns about break-ins, catalytic converter thefts and fires at homeless camps.

“I read that there will be security and oversight on Vista Montana but area residents still do not feel safe at how quickly this decision was made,” wrote Watanabe, whose district neighbors the site. “I have to speak on behalf of my constituents who are literally right across the Guadalupe River and concerned at how this could potentially impact North Santa Clara.” 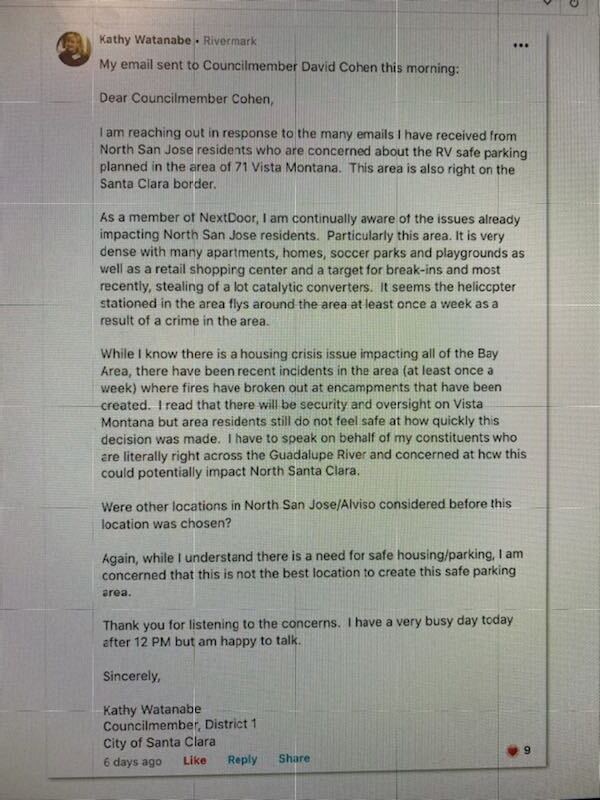 She questioned whether Cohen considered other locations in North San Jose or Alviso before making a selection.

“Again, while I understand there is a need for safe housing/parking, I am concerned that this is not the best location to create this safe parking area,” she wrote.

Watanabe didn’t respond to a request for comment. The San Jose councilmember fired back with a strongly-worded letter from his chief of staff, Stacey Brown.

“I appreciate your concern for your constituents, however, the most productive thing that you can do as a Santa Clara councilmember to address homelessness is to expedite the settlement of the lawsuit over development in North San Jose so that Apple can proceed with the development of the thousands of units of affordable housing they are planning for the property they are cleaning up,” Brown said, referring to a protracted litigation between San Jose and Santa Clara over the development of North San Jose.

Brown also said the site is a temporary measure and has 24/7 security.

The fiery exchange is the latest swing between two cities with a history of bitter court battles over housing.

In 2016, San Jose sued its neighbor over Related Santa Clara, a $6.5 billion office and retail development near Levi’s Stadium — setting off an unusual turf war between the two cities. San Jose leaders such as Mayor Sam Liccardo said Santa Clara would get the new jobs from the project while San Jose would be stuck housing the workforce, straining the city’s housing shortage. Four months later, Santa Clara sued San Jose over Santana West, a commercial and office development on Santa Clara’s southern border. San Jose officials called it spiteful and retaliatory.

The Santa Clara councilmember isn’t the only one raising NIMBY talking points in her letter. Nearby residents circulated a petition protesting the new parking site. As of Friday the petition had more than 1,000 signatures.

“With the new site in place, it will be very hard for us to walk with kids and our families in the dark,” a resident said during a recent San Jose City Council meeting. “The city is saying it’s an experiment. So what are you trying to get out of that experiment? What if the experiment fails?”

“They’re at the motels,” Osmer said, referring to the accommodations provided by HomeFirst, a nonprofit organization that helped transfer residents from the Apple encampment. She added that one man who lives at the site goes out of his way to make sure it stays clean.

Political consultant Rich Robinson said it’s unusual to see a politician publicly critique an elected official in a different city, noting that it doesn’t usually help public policy. He added that it’s disingenuous of Watanabe to complain about homeless issues in San Jose.

“If Ms. Watanabe wants to complain about a housing problem,” Robinson said, “maybe she should provide more affordable housing in Santa Clara.”