When forced to choose between public health or the economy, the majority of Santa Clara County residents surveyed in a new poll said they’re more concerned about public health — despite the county’s shelter-in-place order ravaging local businesses.

The poll, conducted from May 14 to May 18, surveyed 1,000 randomly selected county residents by telephone, email and text. The poll was done in four languages — English, Spanish, Vietnamese and Chinese — and had a margin of error of 3.1 percentage points.

“We wanted to hear directly from the residents of the county how COVID-19 was impacting them and what the challenges were, especially with respect to the diverse communities in the county,” said Deputy County Executive David Campos.

When forced to choose, pollsters found 59% of county residents said they’re more concerned about public health, compared with 39% who worried more about impacts to the economy under the shelter-in-place order. The order, first issued in mid-March, closed offices, construction sites, restaurants and retail businesses to curb the coronavirus spread.

“We’re trying to get our pulse on the community mood, and that’s not a number that should be easily dismissed,” said Supervisor Joe Simitian, pointing to the 39% of people who said they’re most concerned about the economy. 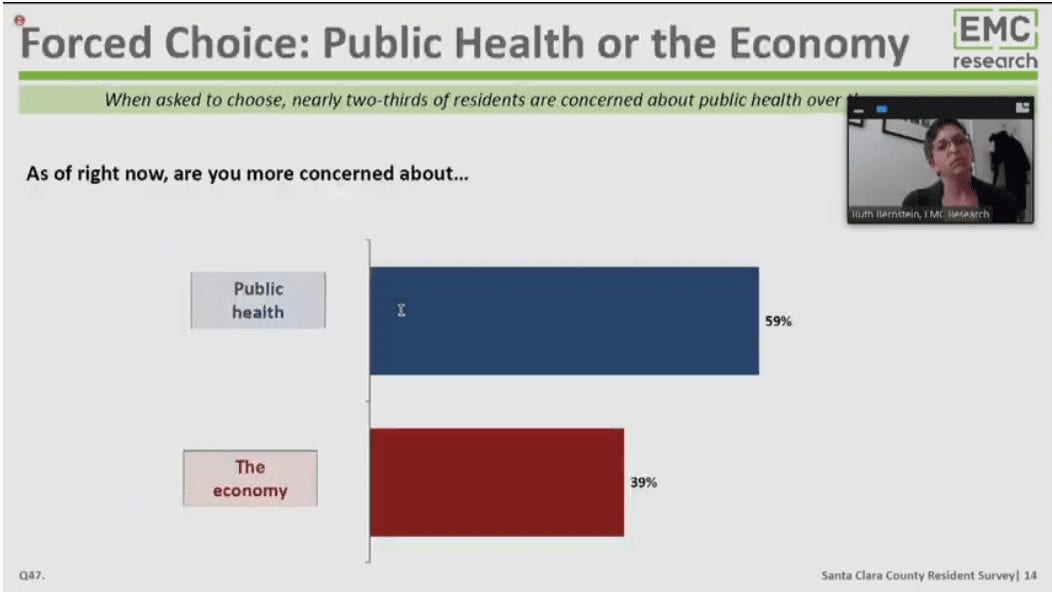 But Supervisor Mike Wasserman questioned the poll’s findings, saying that residents indicated in another question that the most important problem facing their family is finances and unemployment.

According to the poll, which was presented to the Board of Supervisors on Tuesday by EMC Research’s Ruth Bernstein, 23% of respondents said finances and unemployment is the most important problem facing their family, while 22% said it’s the coronavirus and 14% said their biggest problem is housing costs and cost of living.

“Any person who voted for anything got one vote,” Wasserman said. “It’s easy to show that people are two-to-one more concerned about the shelter-in-place (order) than the coronavirus.” 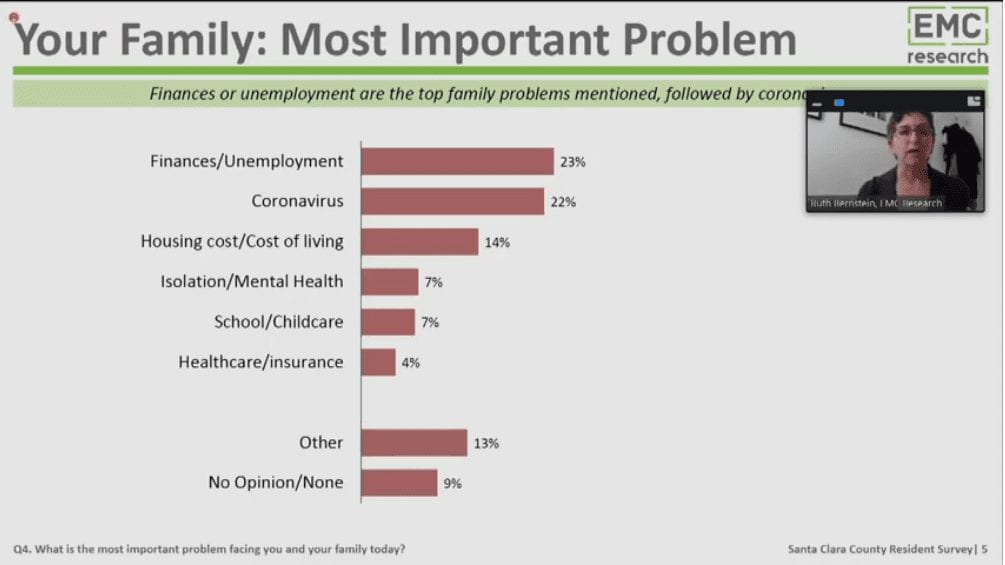 When asked to cite the most important problem facing the county, 43% of the respondents said it’s the coronavirus, followed by jobs, affordable housing and homelessness with 10% each. 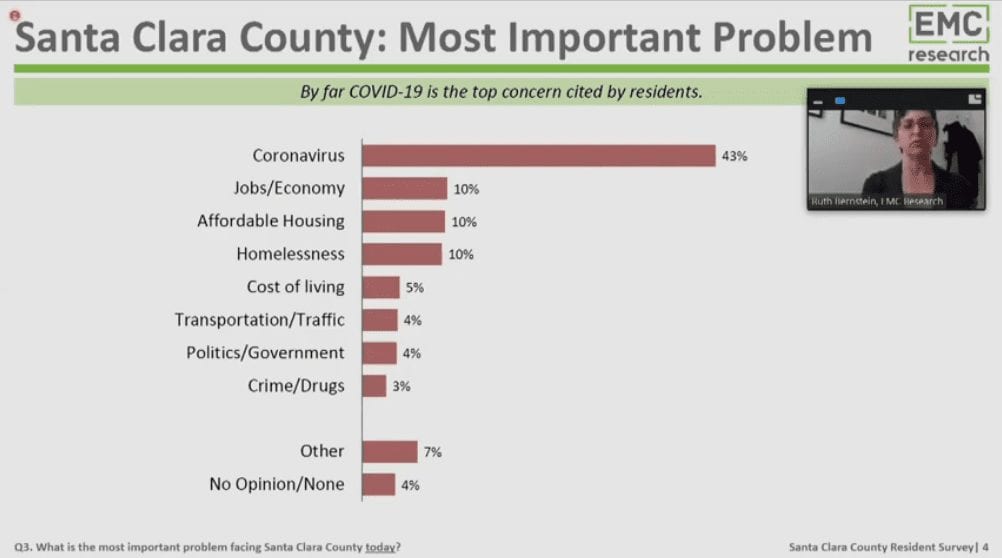 The majority of residents polled said they’re only making essential trips to the grocery store or to exercise, and they’re wearing masks every time they go out.

Even as residents get anxious about the health orders, Cindy Chavez, president of the Board of the Supervisors, said the county needs to protect vulnerable people, including low-income populations and communities of color that are disproportionately represented in COVID-19 cases and deaths. She said the county must move deliberately in reopening.

“Really how we’re protecting lives is we really have the support of the community,” Chavez said. “And we have to continue to demonstrate to them that we’re worthy of that support.”

Despite Gov. Gavin Newsom authorizing counties to gradually open their economies, announcing Tuesday that barbers and hair salons can reopen, Santa Clara County and most of the Bay Area are moving slower. Unlike 47 other counties that have met certain criteria and opted to reopen dine-in restaurants, Santa Clara County still only allows pickup or curbside delivery.

Similarly, malls and shopping centers remain closed here, while other parts of the state have started to reopen them under social distancing rules. Retailers here can only provide curbside pickup or delivery.

The county’s health officer, Dr. Sara Cody, has cautioned that reopening the South Bay’s economy too quickly can result in a rise in new COVID-19 infections and deaths, which have finally begun to stabilize. However, the decision to move slower than the state has led to an outcry from business leaders and small business owners who say their livelihoods are upended by being shuttered for more than two months.

For the first time, Cody criticized Newsom Tuesday for moving too quickly.

“The pace at which the state has made these modifications is concerning to me,” Cody told the Board of Supervisors in a report Tuesday. “The state modifications are being made without a real understanding of the consequences of what the last move has been, and with the possibly serious effects for health and possibly serious risk of an exponential growth in cases.”