Santa Clara lawmakers are not pleased with the loss of revenue from non-NFL events at Levi’s Stadium, and they say it’s due to sloppiness on the part of the San Francisco 49ers’ management.

An accounting report presented this week to the Stadium Authority, a legislative body comprised of Mayor Lisa Gillmor and other elected leaders, stemmed from a complaint the authority made in 2018 — that the team’s management was not transparent about finances from non-NFL events from 2015 through 2017.

“Specifically, the year-end net income for the first three fiscal years did not equal the sum of the net income for each individual event,” the report states.

The 49ers have maintained stadium finances are in order and any loss of revenue stems from City Hall’s poor policy decisions, including a curfew that caused major performers such as Ed Sheeran to cancel shows at the $1.3 billion stadium.

But Santa Clara officials were not buying the explanation.

“I do feel very positive at the end of the day we’ll be in a court of law,” Gillmor said. “In the meantime its our responsibility to do what we can to get the manager to be transparent with us.”

The stadium authority hired an independent accounting firm in 2018 to look into the stadium’s finances. A report from the firm found inconsistent revenue reports from 49ers’ management, expenses and revenues for events were sometimes improperly ‘netted’ together and many events held recorded a net loss of revenue.

On Dec. 1, the Stadium Authority unanimously approved continuing a financial review of non-NFL events through present day. Councilmembers invited the team’s leaders to a future meeting to discuss improving transparency and the implementation of a new accounting system.

After nearly two years of work, the accounting firm also determined it had “insufficient records” to completely perform the  review. The firm said 49ers’ management had provided summaries of financial data, redacted documents and did not supply raw records needed to complete the review.

Scott Sabatino, chief financial officer for the 49er’s, refuted the findings of the report.

In a Dec. 1 letter to City Manager Deanna Santana, Sabatino said his organization “was not given an opportunity to review or respond to the report before it was publicly released, and even now, have only had the chance to do a preliminary review.”

There were also “a broad range of errors, large and small, throughout the report,” Sabatino wrote.

Sabatino added the 49ers cooperated and provided more than 70,000 pages of documents, including thousands of pages of invoices and proofs of payment. For example, he said, a packet of documents for a Coldplay concert at the stadium in September 2016 includes receipts and invoices as small as $50.

“We went through every single page to determine whether or not it was adequate from the standpoint of documenting and confirming whether an expense or a revenue was recorded properly and accurately,”  said Timothy Gillihan, the lead accountant on the authority’s review. 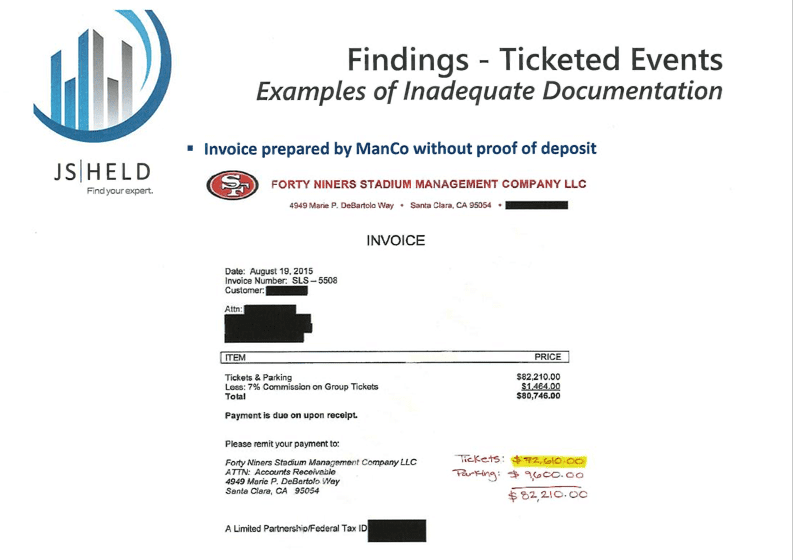 An example provided to Santa Clara Stadium Authority of bookkeeping at Levi’s Stadium.

Sabatino fired back that the accounting firm and city leaders were not transparent about the purpose of the review. He also claimed the firm violated confidentiality by releasing certain documents.

“If the board is truly committed to pursuing a ‘business like’ relationship with the Forty Niners, it should instruct Mr. Gillihan to cease his work on this matter,” Sabatino wrote.

Councilmembers pressed Gillihan for his opinion on whether public funds had been misused, but he demurred.

Gillihan said it was outside his scope to say how public money should be accounted for and handled.

“The way I approached this was similar to any sort of analysis of documentation,” Gillihan said. “I did not apply a stricter or less strict standard of determining whether or not the records were adequate.”