Business
by Vicente Vera
South Bay activist Darlene Tenes, who will serve on the Silicon Valley Organization's new diversity committee, speaks about the findings of an investigation Nov. 10, 2020. Photo by Carly Wipf.

Three prominent community leaders continue to refuse to serve on the Silicon Valley Organization’s new racial equity working group unless the business group agrees to a set of conditions and full transparency, according to a letter obtained by San José Spotlight.

The Nov. 9 letter outlined concerns with The SVO’s “hastily-assembled investigation” into a racist image posted on its website and its rush to resolve the issue without truly listening to the community. The leaders sent the letter to SVO executive board member Kevin Surace.

“The organization commits to a full and transparent examination of the pattern of racist decision-making and the enabling structures of SVO’s management, consultants, PAC donors, and Board of Directors,” the letter stated. “If these conditions and expectations are agreed to, we pledge to participate fully in this journey with the SVO.”

Only two of the six — Tenes and Armaline — went on to serve on the panel, though Armaline serves as an adviser.

SVO officials declined to comment on the investigation into the image posting, the letter penned to Surace or the organization’s plans for its new diversity board.

Moore told San José Spotlight some of his advisors urged him to consider joining the advisory board but he ultimately declined and instead made recommendations to the SVO about others to recruit.

“I actually asked not to be on it. I don’t want to be a part of it,” Moore said. “I don’t believe in self-promotion. If it was a sincere thing where they didn’t believe anybody else could do it, I would jump in, but like I said I think there’s a lot of other people that are better suited to be on that board.”

According to the letter, the leaders declined to serve on the board over what they view as a history of racism at the prominent business networking group.

Guevara also signed the letter but has since spoken to Surace about possibly joining the board.

“He asked whether I’d be interested. I said I’d be interested in hearing more about what they’re going to do,” Guevara said. “After concurring with some of the other folks who were consulted, the fact that we were hearing the same talking points (from the SVO), it got us to write a letter saying, ‘Here are some initial observations we have from our conversations with you. We would love to participate but here are some conditions.'”

Poncho said the SVO has not responded to the letter.

Green said she declined because it seemed disingenuous.

“It’s one of those like, ‘We’re sorry you’re hurt’ – ‘We’re sorry you feel that way’ apologies,'” Green said. “The concern I have is that the SVO has not, in any way, meaningfully responded to the faith leaders’ letter, to the working group’s letter and I don’t know what kind of response they’ll have to the letter we just sent.”

Green added she was disappointed to see the lack of community involvement in the organization’s third-party investigation and the rush to declare there was no racist intent behind the image.

“They know (the image) is racist. That’s why they put it in there,” she said. “It’s a political strategy.”

The letter was delivered the same day Surace stood in front of San Jose City Hall to publicly announce the results of the investigation and announce the formation of the board.

“We are not saying that we have rectified our problems, but we have taken important first steps… by committing to move forward with the help of our diversity and inclusion advisory board,” Surace said at a news conference.

Montgomery said he decided not to join because he felt the business group doesn’t need help recognizing its racist history.

Many community leaders criticized the SVO for holding no one accountable for the racist post or the overall campaign strategy.

This isn’t an isolated incident, they added, as the organization faced backlash for darkening the face of Councilmember Sylvia Arenas in February and altering an image of another candidate, Kalen Gallagher, to look like he was flipping off the camera.

Though Tenes signed the letter, which stated signees would not join the advisory board if their participation was used as a “communication strategy,” she stood with Surace at the news conference and said she looked forward to working with the group.

Tenes said the SVO made the right decision moving away from politics when it dissolved its PAC.

“The difference between me and some of the other people who were asked to be on there is that I’m a business owner,” Tenes told San José Spotlight. “I decided to be on it because I know (the SVO) has a long history of not being welcoming to the community.”

Ballard said she’s hoping to educate SVO leadership on how white supremacy and patriarchy show up in their work. She said Surace asked her to join after she sent a letter criticizing another campaign mailer from SVO related to Opportunity Housing.

“I played a role in elevating this issue with that first letter and feel strongly that if you’re going to criticize, you need to also be a part of the solution,” Ballard said. “It’s easy to be a critic. It’s harder to build something great.” 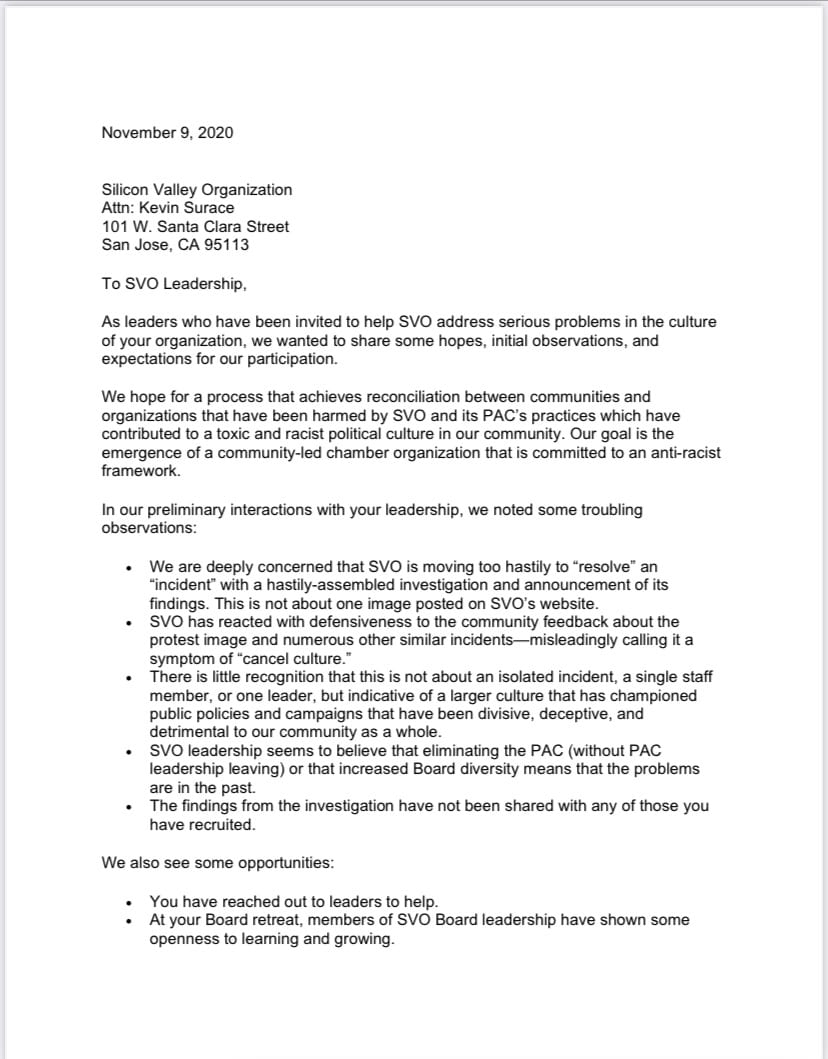 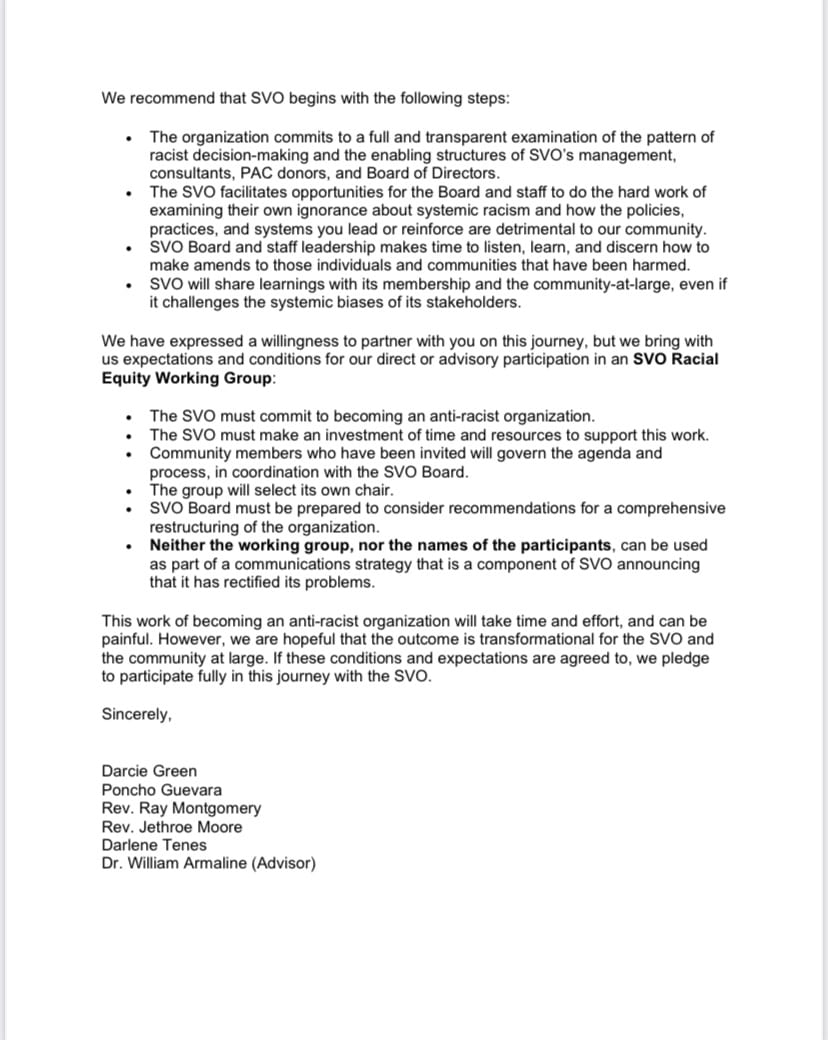