San JoseThe Washington Report
by Vicente Vera
Jimmy Phon, a lead organizer with the Vietnamese Movement For Trump claimed the election was stolen from Donald Trump at a rally on Jan. 6 that he helped organize. Photo by Vicente Vera.

On the same day supporters of President Donald Trump stormed the U.S. Capitol to try and block Congress from certifying Joe Biden as his successor, his local fans held their own protest here in San Jose.

Close to 80 people, mostly Vietnamese-Americans calling themselves the “Vietnamese Movement for Trump,” organized a rally and marched across the street from the Grand Century Mall in Little Saigon.

Bearing a passing resemblance to the events unfolding in Washington, D.C., there was some shouting and shoving back-and-forth between Trump supporters and counter-protesters before police intervened. But unlike what took place in the nation’s capitol, the local rally didn’t devolve into a lawless riot.

“We want to stand with Trump and our people who are in Washington, D.C. right now because they’re fighting for democracy,” said Jimmy Phon, one of the leaders of the Vietnamese Movement. “We want integrity in the election; our vote was stolen,” he added, parroting Trump’s false claims about widespread election fraud.

“You know he lost, right?” said a counter-protester who had made his way to the front of the rally and spoke into the Trump supporters’ microphone. “He lost!”

Trump supporters rioted in D.C. but were more peaceful here

The rally took place a few hours after Trump led a “stop the steal” rally in Washington, D.C. Trump reportedly told his supporters he would “never concede” the election and urged them to march to Capitol Hill to protest Congress’ move to certify Biden’s electoral victory.

Supporters left that rally, overran police barricades, fought with police and infiltrated the Capitol Building, even making their way into members’ offices and the Senate chamber. Vice President Pence was evacuated from the building while many lawmakers were locked down inside. A woman who was shot in the Capitol during the fracas later reportedly died. 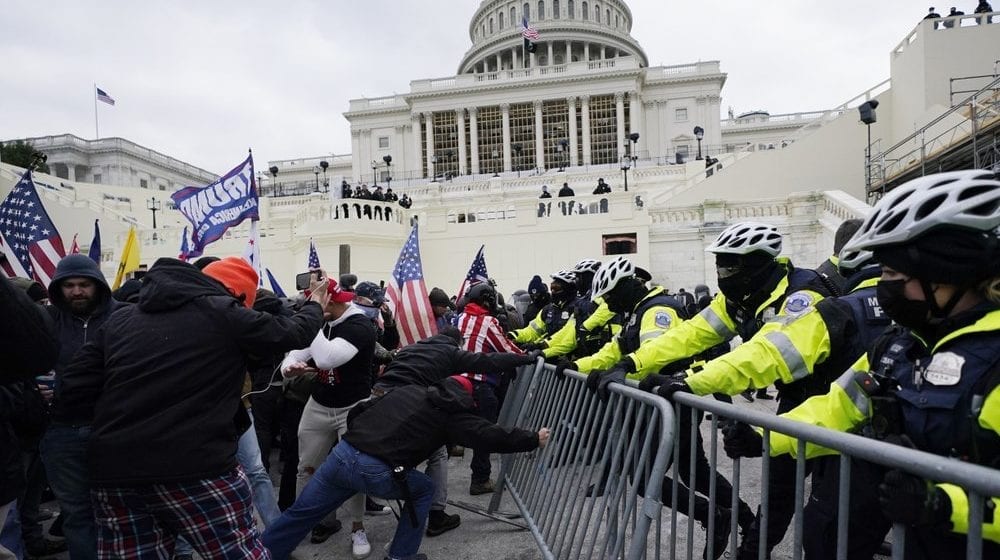 By contrast, the San Jose rally was much less disorderly. Protesters handed out American flags, Trump-themed flags and the heritage flag of South Vietnam. A sea of flags flew above the heads of speakers as they rallied fellow protesters and passed around a microphone, allowing anyone to come to the front and speak.

Phon said that he did not trust the election results because so many votes came in after polls closed on Election Day — a phenomenon that was actually widely predicted prior to the event, because so many people voted early by mail or absentee ballot due to the COVID-19 pandemic. Many states waited to count those votes until after Election Day.

“Just overnight, the vote went up 100,000 for both candidates,” Phon said. “I think that something’s not right.”

Several protesters wore military uniforms as they carried the flag of South Vietnam. Holding signs saying things such as “America will never be a socialist country,” many of the organizers expressed strong sentiments against socialism and communism. Many local Vietnamese or their families fled South Vietnam after it was conquered by communist North Vietnam in 1975.

“We’ve been here for almost half a century. We escaped from communists. You see most of the seniors here are South Vietnamese patriots,” said organizer Jeff Doan. “They are victims of the communists, spending 10 to 20 years in labor camps. We’re lucky we’re here. We lost our motherland and never looked back.”

One of the speakers, Sutton Vo, said the United States was his second home — Vietnam being his first — and he was scared it too would fall to communism.

“They are trying to overthrow America to destroy this country,” he said. “We have to be proud of our country, so I’m ready to save America and stand up with America.”

About half an hour into the rally, counter-protesters flooded the center and began arguing with the Trump supporters.

“If you want facism then go to a facist country. We don’t want you here,” yelled one counter protester.

The police stepped in to calm things down

As the arguments continued, Phon and other lead organizers with the Vietnamese Movement started marching toward the mall, then turned to circle around the area. That’s when Trump supporters and opponents started getting into a shoving match.

Once out of the parking lot, the crowd was met by a few San Jose police officers. As the clash between Trump supporters and opponents grew more intense, additional officers came to the scene.

The police were aware of the rally and came to “keep the peace,” said San Jose Police Captain Jason Dwyer.

“We’re not going to leave until we ensure that the peace has been kept,” he told San José Spotlight.

Officers put themselves between the protesters and counter-protesters when the Trump supporters finished marching. The rally soon ended.

Wednesday’s protest followed a similar one in Los Gatos on Jan. 2. Organizers with the Vietnamese Movement for Trump participated in that one also.

Despite the disruption in Washington, Congress is still expected to certify Joe Biden as the winner of the election. For now, though, organizers with Vietnamese Movement for Trump won’t acknowledge Biden’s win.

“I have no idea,” Phon said when asked what he would do if Trump is not declared the winner. “But you know, that’s why I’m here. We want to send a message that they can’t steal our vote,” he added, again echoing the president’s falsehoods.