Santa Clara CountyThe Washington Report
by Madelyn Reese
and Carly Wipf
Trump supporters try to break through a police barrier, Wednesday, Jan. 6, 2021, at the Capitol in Washington. As Congress prepares to affirm President-elect Joe Biden's victory, thousands of people have gathered to show their support for President Donald Trump and his claims of election fraud. (AP Photo/Julio Cortez)

Silicon Valley leaders from both sides of the aisle reacted with horror Wednesday after thousands pushed past police and stormed the U.S. Capitol in a dangerous attempt to thwart a peaceful transfer of power.

One local lawmaker was even in tears, comparing the stunning scene in Washington to the terrorism acts of 9/11.

The U.S. Capitol building was engulfed in unprecedented chaos, going into lockdown as windows were broken, shots were fired and throngs of rioters mobbed the building’s steps shouting “Stop the steal” while waving flags supporting President Donald Trump.

Four people died during the confrontation, including a woman who was shot inside the Capitol, the Washington Post reported.

Trump, who has disputed the election results without evidence, encouraged his supporters to protest before later telling them to “go home.”

A spokeswoman for San Jose Rep. Zoe Lofgren, who was one of the tellers announcing the election results of each state, confirmed she’s safe after congressmembers’ offices were swarmed by the mob.

“I can confirm that Zoe and all our staff members are currently safe and uninjured,” said spokeswoman Ally Kehoe.

Trump supporters hold ‘stop the steal’ protest in San Jose. Unlike the one in D.C., it didn’t turn into a riot.

Reps. Anna Eshoo and Ro Khanna also confirmed they’re safe, Eshoo saying she is “praying” for the violence to end.

Videos surfaced Wednesday showing lawmakers crouching under their seats with gas masks after security activated crowd control gas against rioters. Donning American flags and Trump campaign materials, one rioter sat on the main dais inside the Senate chambers. Another was photographed putting his feet up on House Speaker Nancy Pelosi’s desk.

After some scrambling and debate, the U.S. Army activated the D.C. National Guard as senators, representatives and staff retreated to safer locations.

San Jose Mayor Sam Liccardo called the display at the Capitol “atrocious” and “sickening.” He said Trump should be tried for sedition.

“Democracy will continue to prevail in the greatest country in the world,” Liccardo said. “This is a moment for all of us — Republican, Democrat, and people of all ideologies — to stand up for our country. The peaceful transfer of power constitutes the very foundation of democratic rule, and free and fair elections comprise the most sacred democratic institution.”

“Whether it’s today’s Trump supporters, or previous incidents with labor Democrats in Wisconsin, left-wing Antifa in Portland, or BLM in Milwaukee or other cities, riots and uncivil behavior is uncalled for,” Connolly said. “We have a representative republic with elections, legal processes to resolve disputes and free speech rights to debate political issues — these elections, processes and rights must be respected and protected — and are the proper path to take to resolve differences.”

A recent retweet from the Silicon Valley GOP repeated unsubstantiated claims that the election results were rigged. 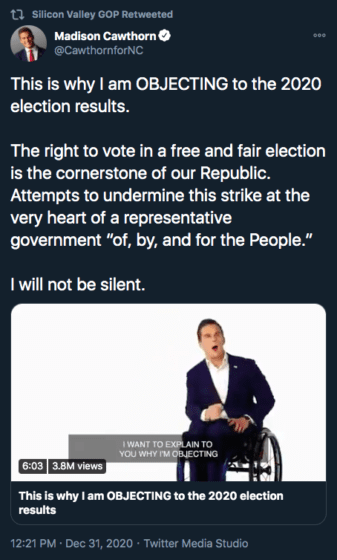 Bill James, chair of the Santa Clara County Democratic Party, said the pro-Trump mob was “encouraged by the president himself to march down to the Capitol and undertake action to disrupt the normal constitutional order.”

James said Trump should be imploring individuals to leave the Capitol and allow Congress to take action.

“Anything short of that is entirely inadequate,” James said. “Any harm that comes to Capitol police, or Congress or members of the public as a result of his inaction will be his responsibility.”

“You don’t think about how precarious democracy is everywhere, including here, until something like this happens,” Davis told San José Spotlight.

She likened the chaos to acts of terrorism on 9/11.

“I remember that day, Davis choked through tears. “This feels like that.”

Former San Jose Councilmember Johnny Khamis, who left the Republican party in 2018, said these types of events were precursors to civil war in Lebanon — the country his family fled from. He said the protest was “despicable” and “borderline treasonous.”

“I’m hoping that calmer voices will prevail and our democracy will stay strong,” Khamis said. “The peaceful exchange of rule is something we all value in this country. We can’t let some small group of irate people stop this wonderful beacon of democracy in the world.”

California Sen. Dave Cortese said the violence at the Capitol is “a direct attack on our democracy and the democratic process.”

“Our federal leadership must join me in calling for the de-escalation of this situation and commit to moving forward to our new presidential administration peacefully so that our nation can address that grave issues we have at hand,” he added.

Biden rebuked Trump, telling him to ‘step up’

Later Wednesday afternoon, Biden addressed the nation and told Trump to “step up.” Biden was already prepared Wednesday to deliver remarks on the economy and relief for small businesses affected by COVID-19, but changed topics after chaos erupted.

He apologized for keeping viewers waiting before plunging into a rebuke of Trump’s lack of response to the violence.

“I call on President Trump to go on national television now to fulfill his oath and defend the Constitution and demand an end to this siege,” Biden said.

“It’s not a protest, it’s an insurrection,” Biden continued. “The world is watching.”

Shortly after Biden’s speech, Trump released a short video, still claiming that the election had been stolen and calling the rioters special people.

“I know how you feel,” Trump said, following it up with: “You have to go home.”