Santa Clara CountyTransportation
by Eli Wolfe
Silicon Valley commuters clog the highway as people travel between work and home in this file photo.

The Congestion Management Program and Planning Committee is recommending VTA’s board of directors approve funding for a list of 13 highway projects in cities across Santa Clara County. The funding comes from Measure B, a sales tax passed in 2016 to fund decades of transit projects.

The committee’s vote on Thursday was the final hurdle for the funding proposal. VTA’s board will consider approving it on Dec. 2.

“I look forward to these projects being able to continue to move forward, and hopefully each of them finding their way to construction,” said committee chair and San Jose Councilmember Raul Peralez.

Measure B, a 30-year, half-cent sales tax, is anticipated to generate $6.3 billion over its duration. Its primary purpose is to relieve congestion in the South Bay by allocating funds to several types of infrastructure, including street and bicycle projects. Last year, San Jose lawmakers voted against a proposal to shift some of the funds to more environmentally-friendly transportation, such as light rail and bus lines. Months later, there was public outcry when VTA outlined a plan to divert the first 10 years of sales tax proceeds to BART expansions throughout San Jose.

Cities applied for Measure B funds for highway projects earlier this year and VTA scored and prioritized funding needs. Staff explained the available funds—$196.81 million— would barely cover four of the 13 projects, so money is being allocated to each project to help clear different phases of development, be it design or construction.

The cities that will receive Measure B funds this round include Campbell, Gilroy, Los Gatos, Mountain View and San Jose. Funds will also be awarded for a project underway by Santa Clara County. 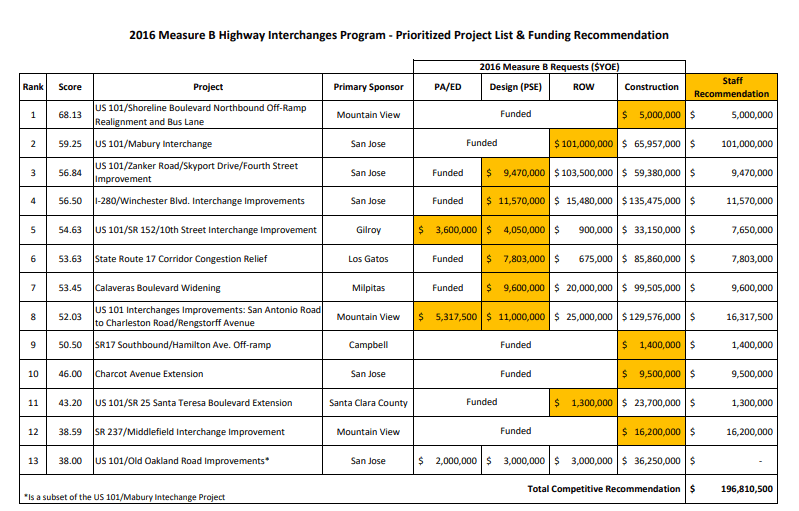 The highest priority project is the U.S. 101/Shoreline Boulevard northbound off-ramp realignment and bus lane in Mountain View, which needs $5 million for construction. VTA also categorized as top priority the 101/Mabury Interchange and the 101/Zanker Road/Skyport Drive/Fourth Street improvement, both in San Jose.

“The only criteria for funding is ‘did the project apply?’” Roemer said during public comment, noting funding appeared to be allocated with no regard to how projects would impact climate change. “Giving money to everyone is never good policy.” 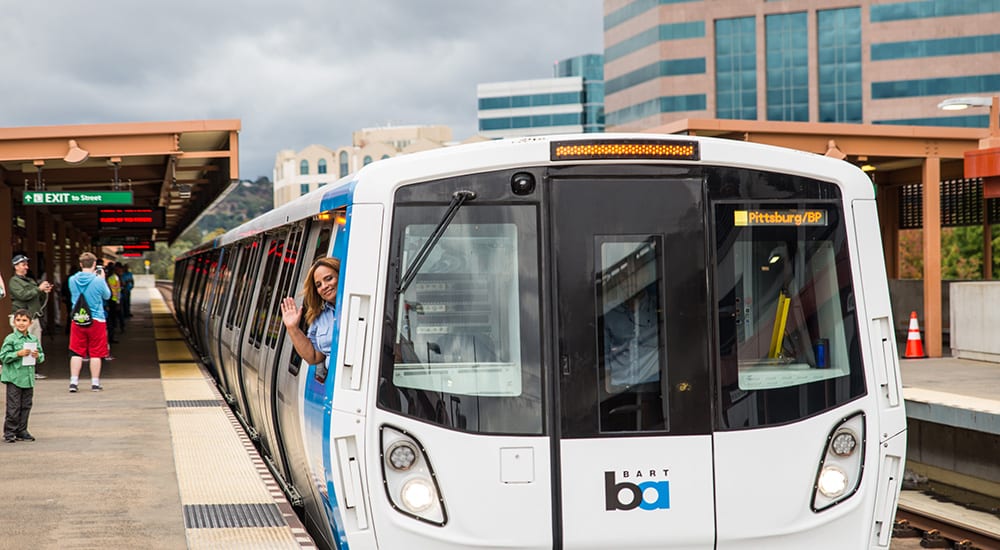 Roemer also complained the agency is allocating significant funds for the construction of low-priority projects, such as the Charcot Avenue Extension. VTA is recommending $9.5 million for this highway overpass in North San Jose, which Roemer and other San Jose residents have been fighting for years.

VTA board member and county Supervisor Joe Simitian noted all of the projects were included on the Measure B ballot, which voters approved. He also observed that multiple VTA committees approved the funding proposal.

“I think (staff comments) reflect the real-world environment in which projects like this get funded,” he said.

One board member raised concerns about making sure Measure B dollars flow to projects that will have the greatest impact on congestion.

“That should be our number one priority,” said board member Carmen Montano, adding she’s also concerned about the equitable distribution of funds to cities. “Some cities probably haven’t had any Measure B funding because they’re not project-ready, but shouldn’t we be assisting them or helping them be project-ready?”

Peralez agreed that not every city is represented, but said cities must prepare to apply for funds if they want to receive them.

“These are not things that should be a surprise to voters,” he said.

The committee is also recommending the VTA board augment the biennial budget for the Measure B program by allocating $190.89 million to Caltrain grade separations and highway interchanges.