Op-ed
by Special to San José Spotlight
Silicon Valley commuters clog the highway as people travel between work and home in this file photo.

On Dec. 2, the VTA Board of Directors will decide how to distribute $150-200 million dollars of Measure B highway funding in the next few years. When the process started in the summer of this year, there was hope VTA would manage this process professionally and with an eye not just on congestion management, but also on climate and equity. It has since become a farce.

In August, the VTA board approved six criteria to rank any incoming highway project applications on a scale from 100 (meeting all criteria) to zero (meeting none). In October, VTA received 13 applications and scored them. Out of the 13 projects, only one scored what teachers would consider a passing grade of more than 60 points. Twelve of the 13 failed to do so and four of the applications received even less than 50 points. And let’s be clear, the scoring wasn’t done by some fierce environmentalists who hate highways, it was done by VTA and city engineers and planners.

Imagine writing an essay in school, your buddies are the ones grading you and you still get an F. That’s how bad these applications are. 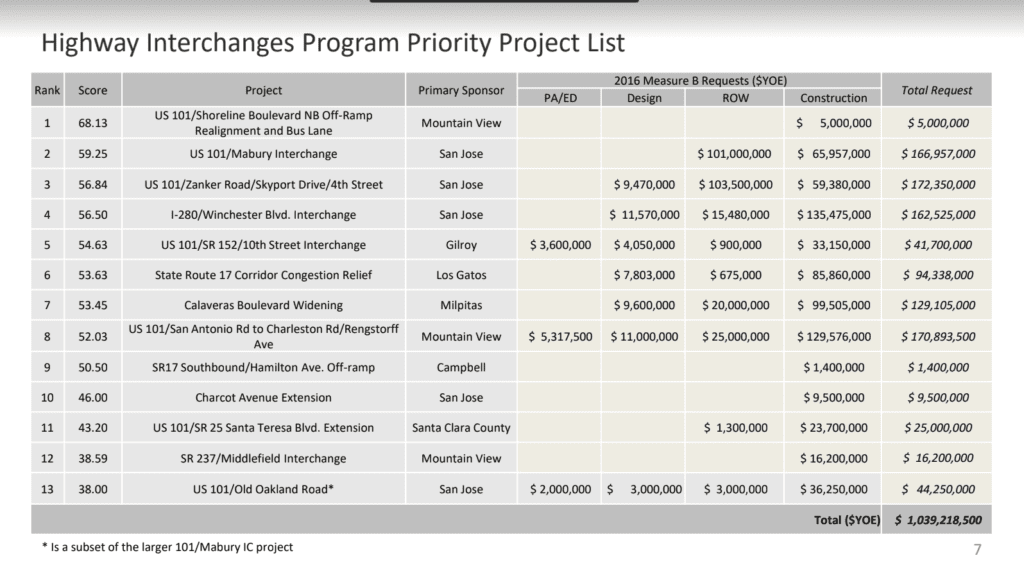 VTA staff was recently asked by San Jose Mayor Sam Liccardo about another Measure B project, one that would double the number of lanes on the ramp that leads from Highway 101 south to Highway 87 south. He asked if that increased capacity could potentially make traffic on Highway 87 worse, because it dumps more traffic on an already congested highway. Staff response: Yes, it could potentially make things worse!

VTA continues to fund projects with minimal or doubtful benefits, even admitting in one of its documents: “Travel patterns in SCL (Santa Clara County) have been pretty stable for the last 30 years. The places that stunk then, pretty much still stink today, but with more lanes.”

Even more bizarre in regards to the applications, the ranking includes three projects from Mountain View, yet the city has no official record of submitting any applications.

There also seems to have been no requirement to be objective in the applications. For example, when asked about community support for the Charcot Extension project, San Jose employees simply failed to adequately mention the overwhelming community opposition to the project. When specifically asked for the project’s impact on vehicle miles traveled, city workers refused again to include this, probably fearing—and rightfully so—that the actual data would make the project look bad.

When asked to make the applications public so that residents can judge the projects for themselves, VTA denied a record request because public oversight would not “allow for a fair evaluation of the competitive process.”  VTA has not even bothered to adequately respond to a follow-up as to whether the applications could be made public after the evaluation concludes.

Fortunately, many cities that submitted applications had no concerns providing them upon request.

How will the scoring of the applications affect the funding the projects will receive? In short, not at all!

The board-approved process and common sense suggest VTA should provide the most funding to projects that score the best and give no funding to projects that score below a certain threshold. However, it seems VTA employees, together with an ad hoc committee of four city representatives, didn’t like that and decided to recommend throwing out the board-approved process and apply a completely different set of criteria instead. 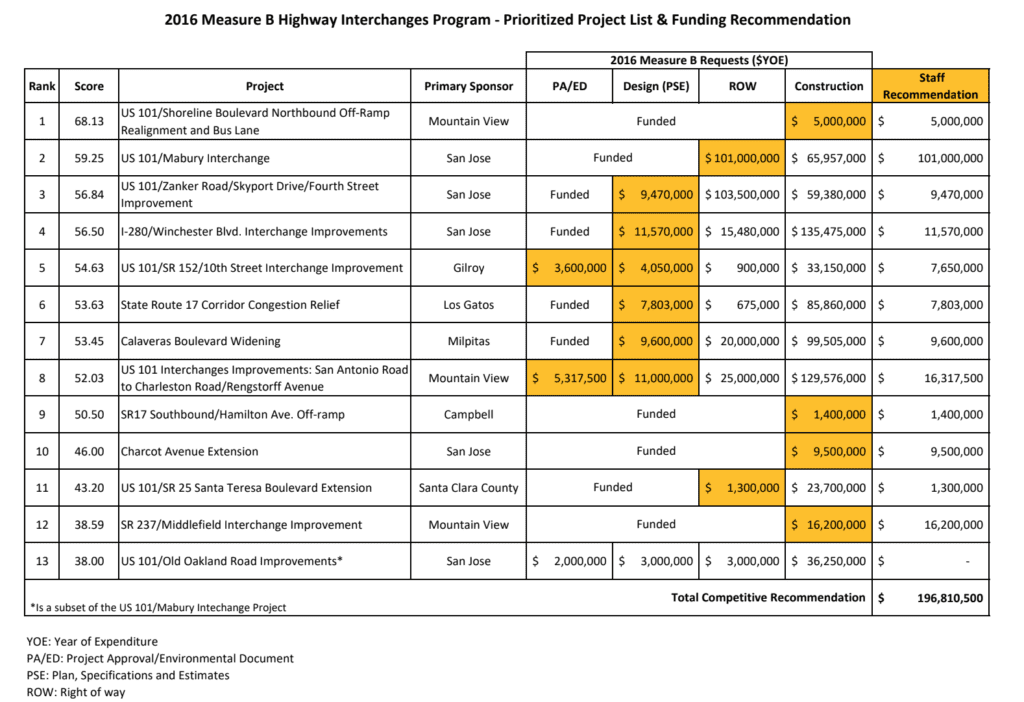 How do the new recommendations play out?

Representatives from Campbell, Gilroy, Mountain View and San Jose served on the subcommittee that helped make the recommendation overwriting the board-approved ranking process. As it turns out, the subcommittee recommended 90.5% of the funding, a total of $178 million, go to these same four cities, leaving only $19 million for the rest of Santa Clara County.

The four cities with representatives on the subcommittee submitted requests for a combined $747 million and got 23.9% of it funded, while all other requests submitted by other cities—a $248 million ask—received only $19 million in funding, or 7.5%. Coincidence?

The new process sure seems to benefit mostly those who came up with it.

On Dec. 2, the VTA board has an opportunity to either go along with this farce or to remind staff that they had given specific direction and laid out a process—based on recommendation by the very same staff, one should note.

There is no shame in admitting fault and establishing new criteria and a new process, but then there needs to be a new and transparent call for projects. And hopefully this time, VTA will receive more applications that deserve a passing grade.

Robin Roemer is a former member of VTA’s Citizens Advisory Committee, a transportation, climate and Vision Zero activist and chief executive of “Protecting the Children of Orchard School,” a nonprofit fighting against the Charcot Extension project.