San Jose
by Carly Wipf
While more than 120 miles of San Jose roads have been repaved using Measure T funds as of October, the effort will not likely be completed until 2028.

For months, lobbyists from some of San Jose’s most powerful organizations have privately met with politicians and government officials — and nobody knows why.

Week after week, two prominent business groups — the Silicon Valley Leadership Group (SVLG) and the San Jose Downtown Association (SJDA) — have filled out weekly lobbying disclosures, which require them to divulge who at City Hall they’re meeting with, how the communication happened and, most importantly, the topic being discussed.

SVLG reported six phone meetings last month, including with Mayor Sam Liccardo, Vice Mayor Chappie Jones and Councilmembers Dev Davis, Johnny Khamis and Pam Foley. SJDA met once in August with Kelly Kline from the mayor’s office, once with Liccardo himself and once with Councilmember Raul Peralez.

Instead of revealing why they met, as required by city law, both groups simply posted a generic mission statement, contradicting the transparency goals of the city’s ‘sunshine’ and lobbying ordinances. 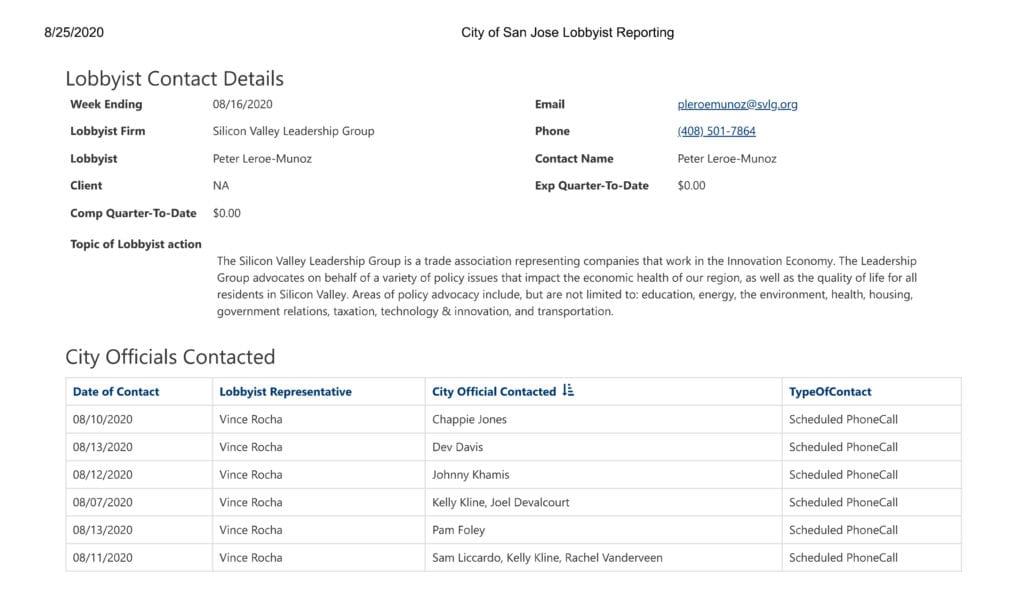 San Jose’s lobbying rules were created in 2007 to increase transparency at City Hall and allow the public to follow the money and understand how lobbyists are influencing politicians. The sunshine ordinance requires the city clerk to post weekly reports which require lobbyists to disclose the “topic of lobbyist action” for every meeting.

Yet those organizations are not disclosing the meeting topic, leaving the public in the dark about what policies they lobbied on.

Each week for the past six months, the topic section of SVLG’s lobbying reports contains the following general statement:

“The Silicon Valley Leadership Group is a trade association representing companies that work in the Innovation Economy. The Leadership Group advocates on behalf of a variety of policy issues that impact the economic health of our region, as well as the quality of life for all residents in Silicon Valley. Areas of policy advocacy include, but are not limited to: education, energy, the environment, health, housing, government relations, taxation, technology & innovation, and transportation.”

The Downtown Association has stated the following since December:

“San Jose Downtown Association is a non-profit membership based organization founded in 1986. SJDA represents business & property owners working to enhance the vitality and livability of downtown. The In-House Lobbyist seeks to influence policies and projects related to downtown San Jose.”

Without disclosing specific policies being discussed, the public won’t know how elected officials are being influenced by lobbyists prior to a vote.

The real purpose of the meetings

When asked whether posting an organization’s general mission statement as the “topic of lobbyist action” on weekly reports robs the public of the right to know the real purpose of a meeting, City Clerk Toni Taber demurred.

“A lobbyist could be meeting with a city official to talk about their organization,” said Taber, whose office is charged with overseeing the reports.

But that wasn’t the case.

When asked by San José Spotlight, leaders of both organizations confirmed they met with lawmakers to lobby on the commercial linkage fee, which requires commercial developers to pay fees to fund affordable housing projects. The fee — long debated by business leaders who claim it will stunt growth — was approved by the City Council Sept. 1.

“We try to keep that broad statement in there because we do talk about a lot of different things in terms of our advocacy work,” said Leroe-Muñoz, who is registered as an in-house lobbyist for SVLG. “We want to try to keep that as broad as possible so that people can understand.”

When asked whether he doubted Silicon Valley residents would “understand” the concept of commercial fees, Leroe-Muñoz said the organization was just trying to follow the municipal code.

The code states lobbying reports must include a brief description of the items of legislative or administrative action the lobbyist is seeking to influence, the dates and methods of contact and how many times a person was contacted.

Any “contact” between a city official and registered lobbyist must be to “promote, support, modify, oppose, cause or delay or abandonment of conduct, or otherwise affect an official action in any way,” the code says. Talking about the general mission of an organization, then, does not qualify as lobbying.

The six meetings without disclosures were Zoom calls on commercial linkage fees between Vince Rocha, SVLG senior director of housing and community, Liccardo and councilmembers. The meetings occurred between Aug. 7 and Aug. 13.

A meeting between Carl Guardino, the former CEO of SVLG and Liccardo on Aug. 1, was a “personal call” accidentally logged after Guardino left the leadership group July 31, according to Leroe-Muñoz.

Scott Knies, executive director of the San Jose Downtown Association, spoke to Peralez on Aug. 21 and Liccardo Aug. 26 to discuss commercial linkage fees. Knies said the association is less focused on the minutiae of paperwork and more concerned about keeping businesses afloat during COVID-19.

“We’re really focused on trying to save as many businesses as we can downtown and we’re hanging on by the fingernails,” said Knies.

Knies added no one has asked for details about what his organization is bending politicians’ ears about — so they didn’t invest time filling out the disclosures.

“We’re an open book. It’s just a matter of not having to go in and spend more precious minutes filling out yet another form that it doesn’t seem is getting much attention,” Knies said. “Folks don’t have access to the information, yes, but there doesn’t appear to be a need. Nobody’s ever asked for more details.”

David Snyder, executive director of the First Amendment Coalition, a nonprofit dedicated to open government and civic engagement, said lobbying disclosures are crucial for understanding how individuals or groups attempt to influence politicians behind closed doors.

“These kinds of reports aim to shed some light and accountability on what is otherwise a fairly opaque process,” Snyder said. “They’re absolutely crucial to ensure there are no improper efforts to influence politicians and that the politicians are acting in the public’s best interest, not in their own interest, or in the interest of their own political future.”

“If nobody’s looking at this and nobody’s writing stories about it, then people tend to not be specific in what they’re doing,” Reed said. “Let’s say you’re an environmental organization. You have a conversation about open space with a member of the council. You could have that conversation talking about open space. That’s not actually lobbying. But if you’re talking about what to do, on a zoning measure or a general plan measure, or the purchase of land or something for open space, that should be disclosed.”

San Jose’s 2007 Sunshine Ordinance, which established the city’s open government laws, go farther than California’s Brown Act and the Public Records Act to increase transparency in local government by requiring lobbyists to disclose meetings, elected officials to publish their calendars and the city to release public meeting agendas 10 days before a meeting, among other measures.

The city clerk is responsible for a superficial review of lobbying forms to make sure they’re complete, but is not required to read closely for content, according to a 2017 report.

“The (lobbying) ordinance, like all other ordinances, doesn’t work as well if they’re not enforced — if there’s nobody watching,” Reed said. “One of the things we used to do was at the Rules Committee, we monitored whether or not councilmembers and their staff were following the calendar disclosure requirements.”

Reed said if someone is trying to influence commercial linkage fees, then they must say so.

Being ‘detailed and transparent’

But not everyone is skirting the lobbying disclosures.

Longtime land use consultant Erik Schoennauer keeps his reports specific. His reports show this past week he met with Kelly Kline, Liccardo’s director of land use and economic development and Joel Devalcourt, Liccardo’s senior land use advisor, to talk about the status of a North San Jose development project at Trimble Road.

“Our approach is to be as detailed and transparent as possible,” Schoennauer told San José Spotlight. “We want to fully comply with both the letter and the spirit of the ordinance. So to be very, very clear on what we’re talking about, when we’re talking, how often we talk — so that no one could ever accuse us of not fully complying with the city’s laws.

City documents state anyone can file a complaint with the city clerk if they suspect a violation of the lobbying ordinance.

The city clerk ultimately is responsible for ensuring groups comply with lobbying disclosure, but the City Attorney’s Office and the city’s Board of Fair Campaign and Political Practices may play a role in enforcing lobbying requirements, according to Adrian Gonzales, the board’s chair.

In the five years he’s served on the board, Gonzales said, there has not been a single substantiated complaint relating to lobbying disclosure violations. Therefore, it is not an issue the board has delved into.

“If there is interest from the community in making these reporting disclosures more specific and standard, this is a policy issue that the board can look into for further study and recommendation to the City Council,” Gonzales said.

No opening date in sight for San Jose nightclubs: 'How long can you hold on?'