After Carl Guardino announced in January he is stepping down as CEO of Silicon Valley Leadership Group, speculation swirled about the powerful business leader’s next move.

“I truly do not know what is next, as I did not believe it was appropriate to start searching in any way while I was still being entrusted to lead the Leadership Group,” Guardino told San José Spotlight in January.

“On behalf of the Board and the entire leadership team, I welcome Carl to Bloom Energy,” said KR Sridhar, founder, chairman and CEO of Bloom Energy, in a statement. “Carl’s extensive track-record solving complex problems and building consensus across a diverse set of stakeholders will bolster Bloom’s next phase of growth and innovation. As the energy sector continues to transform, Bloom has an opportunity to advance new technology and business models that will enhance the health and livelihoods of the communities we serve.”

Guardino will lead the San Jose company’s government relations and policy strategy, focusing on with a focus on engaging policymakers on the importance of building local resilience after the coronavirus pandemic, according to the Business Wire.

Donning a Bloom Energy t-shirt and other swag, Guardino made it Facebook official with his own post on Tuesday. 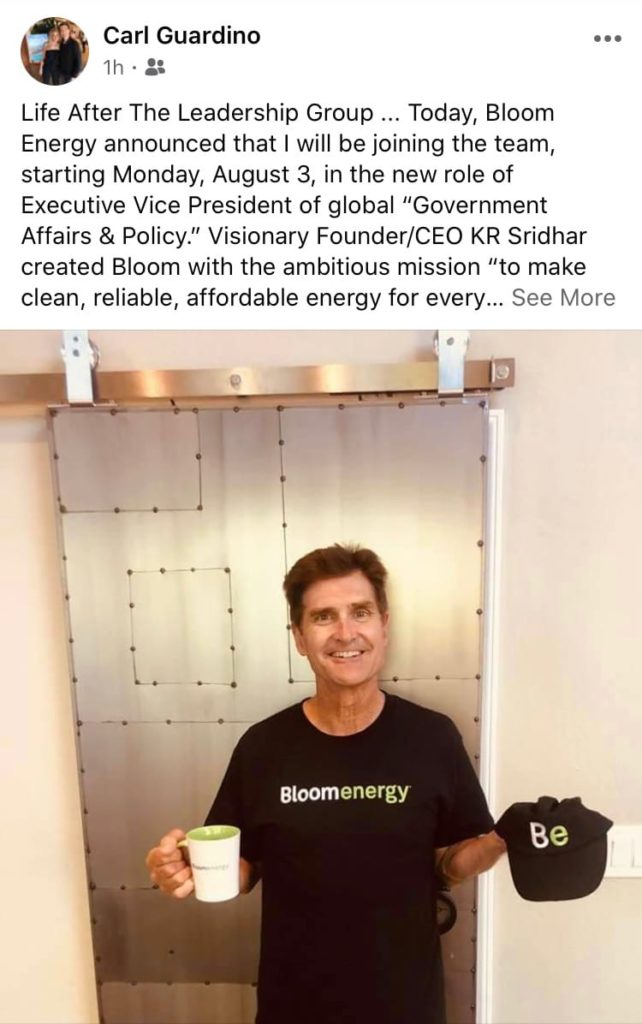 Guardino said in the post that Bloom Energy’s mission to create clean, reliable and affordable energy is “not only inspiring; it’s essential.”

Guardino has been with the Silicon Valley Leadership Group since 1997 and for nearly 24 years influenced public policy on housing, transportation and education.

He was known for driving campaigns on crucial proposals such as Measure A in 2000 that brought BART to the Bay Area, the city’s Measure B in 2008, a sales tax dedicated to funding a 16-mile stretch of Santa Clara County’s BART extension and, most recently, leading the effort on the FASTER Bay Area measure, a $100 billion tax measure for transit investment.

“This isn’t just a story about brilliant minds, it’s a story about inspired hearts tackling this crisis through innovation,” the mayor said about the technology company’s work on ventilators.

Guardino’s friends, including California Assemblyman Evan Low, lined up to congratulate him on his second act.

Congratulations @CarlGuardino on your new role as EVP for global "Govt Affairs & Policy" for @Bloom_Energy! We will cherish your time at @SVLeadershipGrp until July 31 and when you start at Bloom on Aug. 3rd.

Bloom Energy is one of Silicon Valley Leadership Group’s 350 member companies, according to its website.

In addition to joining Bloom Energy, Guardino last month jumped on the San Water Company’s Board of Directors.

“I am very honored about this new role with SJW Group, and have maintained a longstanding relationship with its leadership team,” Guardino said in a statement at the time. “Safe and reliable water service is fundamental for public health protection and economic development.”

Last month, he also joined the Board of Directors for Equilar, a Redwood City company that provides tools for board recruiting and business development.