Less than half a mile away from the gates of the platinum-plated campus of Stanford University – the hotbed of Silicon Valley riches – a group huddled around a dimly-lit transit station and shivered in the bitter cold.

They held their oversized backpacks close to them, trying to stay warm despite their hoodies, beanies and gloves. It was nearing midnight and their only refuge — a warm, inviting bus — lingered a few feet away, its gleaming lights breaking through the dark night.

But the doors were locked, and the men and women had nowhere else to go. The group stood patiently at the Palo Alto Transit Center in the cold, waiting for the driver to let them in to begin the slow, bumpy ride to San Jose — a chance to close their eyes and sleep in a warm, safe place.

In an effort to cut costs, VTA recently proposed discontinuing Route 22’s service between 1 a.m. and 4 a.m. —  a crucial time where many use the bus as a warm place to rest, feel safe or commute from a late-night job.

“We are certainly aware of the impact that this proposal could have on homeless riders and those who may rely on this service as transportation to get to and from work,” said VTA spokeswoman Holly Perez.

It’s a severely disabled man who rides the bus to warm up his freezing hands. It’s an elderly woman who once slept on the bus but now takes it home to a cottage in Santa Clara. It’s a homeless Air Force veteran who takes it to a Palo Alto hospital. It’s a Guatemalan immigrant who hops on after work where he hands out extra pizzas to starving fellow riders.

And now Hotel 22 may be another thing the riders have to say goodbye to. 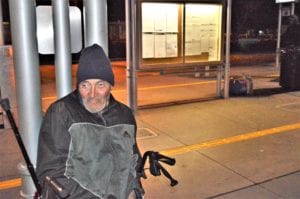 Over the course of two nights, San José Spotlight’s team rode Route 22 — during the most frigid hours of the early morning.

Riders are forced off the bus at the Palo Alto Transit Center and wait nearly 30 minutes while the driver takes a break.

One evening, Jose Melchado sat on a cold bench at the transit station waiting to get back on the bus. He is a disabled man who has been homeless for 8 months.

Melchado, 68, has taken the bus twice a day, every day, for the last five months.

“We use it. We need it. It’s not going to be good for us,” Melchado said. “It’s going to hurt me because I’ll have to look for another place to stay. It’s unfair.”

A 2018 report by the U.S. Department of Housing and Urban Development said that nearly half of all unsheltered people in the country were in California. In Santa Clara County, at least 75 percent of the 7,254 homeless residents are unsheltered, like Melchado. 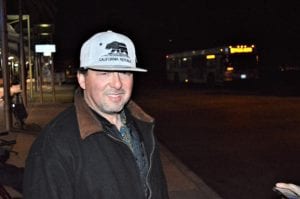 Frank “Jay” Borstllino, an Air Force veteran, wound up homeless after a fight with his father. The former bank teller and grocery store clerk sleeps at a shelter a few nights a week.

“I think it would be a disservice (to cut it). There are people who really need it,” said Borstllino, 49, who’s taken Route 22 the last three months. “It would eliminate a means for people to stay warm.”

While riding the bus, Borstllino discovered the Palo Alto veteran’s hospital, a “much nicer” facility, he said, that helps treat his anxiety, PTSD and diabetes. “Route 22 means staying warm, getting to the hospital, getting a good meal, getting clothes, shoes, and everything you need to shower and shave,” he said. 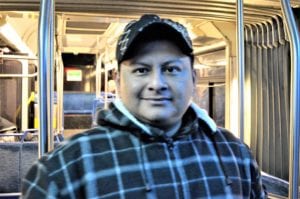 Bus 22 has been a refuge and a community gathering place to many from all walks of life.

Brayan Pacheco isn’t homeless, but he experienced extreme poverty in Guatemala. Now he works nights at an Italian restaurant in Palo Alto and takes Route 22 to get home.

Many riders, such as Allan Gilbert, 52, were unaware that the bus line’s service during these times might be discontinued.

“I have no idea what I’m going to do. This is a direct route for me,” said Gilbert, a dishwasher at Shake Shack who uses the bus to get home to a halfway house every night.

“Route 22 is one of the longest routes VTA has, so it’s a popular rest for some people to get out of the weather and go back and forth riding it,” Gillbert added, as he waited in a line to reboard the bus. “It’s a safe shelter.” 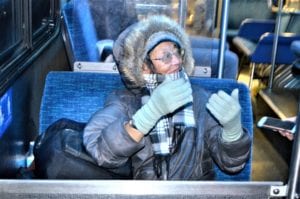 And for some residents, Route 22 was a temporary stop in their journey home.

Judy Okida was previously homeless for four years. She was forced into the streets after her husband died in 2012 and she could no longer afford rent in Santa Clara. Rent for her studio apartment near Levi’s Stadium spiked to $1,600 a month.

“It’s very dangerous being out there,” Okida said. “I’ve had people follow me down the street, begging or trying to get money out of you. It’s bad at night.”

Okida, 70, said she got “lucky” and found housing through her pastor who connected her to a man looking to rent a “cottage” on his property. It costs just under $500 to rent.

“Tonight I’m going home,” Okida said while on the bus. “It’s wonderful. I feel like a normal human being.”

Being homeless made her “lose track of what it means to be human.”

“You feel so demeaned. You lose your humility. It’s the worst experience. I wouldn’t wish it on anyone.” 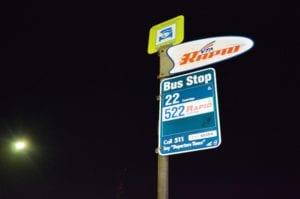 Nowhere else to go

Cutting service without an alternative, some housing advocates say, would devastate the South Bay’s most vulnerable residents.

“Homelessness is a community problem, it requires a community solution,” said Ray Bramson, the CIO of the nonprofit Destination: Home. “Our big goal is how we can deepen our partnership with VTA and other providers. The meeting will be an opportunity to begin a discussion.”

Currently, Route 22 is the only bus line that runs 24 hours in Santa Clara County, from East San Jose to Palo Alto. Although ridership for the route is high, VTA faces severe deficits. The proposed service plan, affecting 70 changes across bus and light rail routes, could save at least $15 million annually.

VTA is hosting community meetings and plans to work with nonprofits to discuss potential solutions before the Board of Directors decides Route 22’s fate in May. Any service changes would go into effect in Fall 2019, coinciding with the start of BART service to San Jose.

“While we recognize that members of our community have used our buses as a safe haven, the cities and county play a critical role in tackling homelessness,” said Perez from VTA. “We want to serve the community and strike that balance with being financially viable and continuing transit services.”

Andrea Urton, CEO of HomeFirst, the largest provider of sheltering services in Santa Clara County, weighed in on how her organization could partner with VTA.

“We are here and available,” she said. “We work closely with the city of San Jose and operate the largest outreach program. We are always open to sending our highly-trained outreach staff out to engage and assess their needs and offer whatever resources we can.”

According to Bramson, VTA can help organizations such as Destination: Home by potentially funding case managers or helping support housing subsidies. The meeting will allow community organizations and VTA to discuss potential partnerships.

“We depend on them in the same way we look at the city of San Jose when it funds and operates overnight warming locations,” Bramson said. “These public agencies all have a role to play. The fact that people rely on this service tells us how dire this situation is.”