A commercial linkage fee is paid by developers of new commercial development to fund affordable housing.

The fees, which are based on square footage of the development and the number of employees who work inside, are meant to offset the need for affordable housing generated by that development.

Right now, San Jose only charges such fees on residential developments — not commercial — at about $18 per livable square foot.

The study released Friday examines how much the city should charge commercial developers to fund affordable housing projects. The buildings subject to the new fee include office, retail, hotel, industrial, research and development, warehouse and residential care.

The city’s consultant, Keyser Marston Associates, found that a fee of up to $176 per square foot for new retail buildings would “reflect the cost of mitigating affordable housing impacts of new development.” The consultant identified $151 per square foot as the reflective cost of new high-tech office buildings. 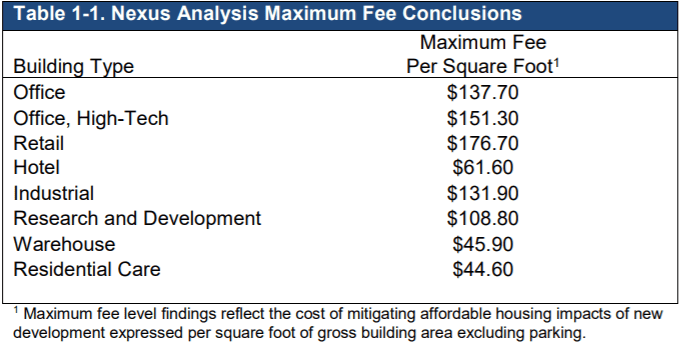 Kim Walesh, the city’s director of Economic Development, said in a memo the new fees she’ll propose to the City Council will be far lower than the amounts identified in the nexus study. A forthcoming feasibility study, which will calculate the likely economic effects of the fees, will help city staff determine which fee amount is sustainable, Walesh said.

The city plans to publish that study next Friday.

Angeles Rodriguez, a longtime North San Jose resident, said lawmakers should adopt the commercial linkage fees. She said her neighborhood has changed significantly since Apple bought land in the area.

“It’s a reality that as companies come to the city, it makes it more expensive,” Rodriguez said in Spanish through an interpreter.

Rodriguez, who shares a two-bedroom home with her four children, two nephews and oldest daughter’s husband, said the city needs to do everything it can to make rents more affordable.

“(I’ve been) wanting to go live in a bigger place, it’s just not possible,” Rodriguez said.

The San Jose City Council voted to conduct a feasibility study on commercial linkage fees more than a year ago. The studies were originally due by April, but the global pandemic and subsequent economic shutdown required more study from consultants about the impact of the fees in light of an economic downturn and recession.

San Jose’s metropolitan area has lost approximately 133,000 jobs from February to May, the report said.

“Commercial linkage fees are just going to drive away our business,” Khamis told San José Spotlight in an interview. “Our business is already a tenuous situation… I don’t think that this is the time to increase fees for commercial (developers) and job creators in the city of San Jose.”

City officials, including Mayor Sam Liccardo, have said that San Jose needs more jobs. The city’s jobs-to-housing ratio is lopsided and San Jose has more homes than it does jobs — leading to people calling it a “bedroom community” and leaving the city every day for work.

San Jose’s jobs-to-housing ratio is 1 job for every 1.5 housing units, a bigger imbalance than neighboring cities such as Santa Clara, according to a map by the Association of Bay Area Governments.

The consultant also adjusted its fee estimates to account for the fewer number of people working in commercial buildings due to work-from-home orders.

“The estimated square feet of office space per employee was increased by one third from estimates prepared prior to the pandemic,” the consultant wrote. “If planning principles reverted to a world of primarily enclosed offices or high-paneled cubicles to give employees
increased separation, square footage requirements per person would increase anywhere from 20 to 30 percent.”

Housing advocates have proposed a commercial linkage fee for San Jose for some time. Years ago, the Civil Grand Jury of Santa Clara County published a report recommending the fees, listing them as an important source of funding for affordable housing.

City officials will present their commercial linkage fee recommendation to the City Council on Aug. 25. If adopted, the fees would become effective on Nov. 14.