San Jose misspent $24,000 in taxpayer funds by paying mileage costs of employees who were ineligible to receive such payouts because they violated a city policy, according to a critical new audit of the city’s reimbursement processes.

“While reimbursements generally appeared appropriate and in compliance with city policies, we noted some areas where city processes can be improved,” wrote city auditor Joe Rois. 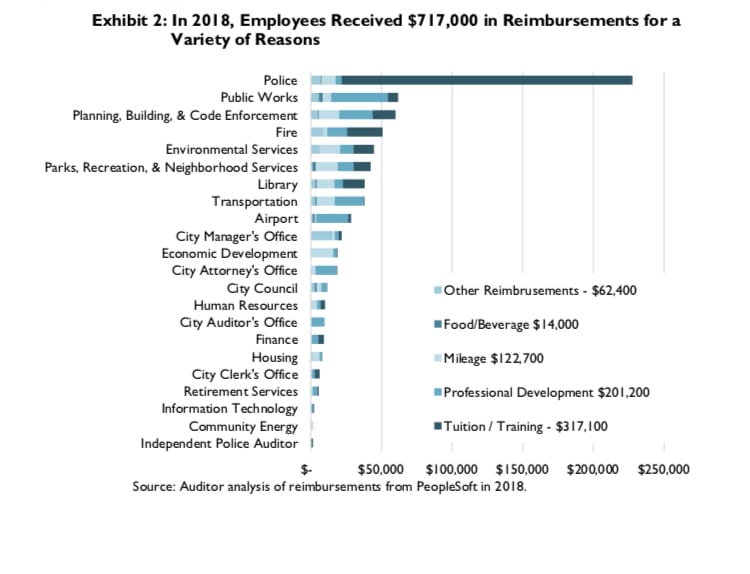 Employees are commonly reimbursed for food and beverage, mileage, training and development, clothing and equipment, or “other” expenses such as parking, local transportation and tolls.

The San Jose Police Department accounted for the majority of reimbursements, outnumbering every other department for requesting hundreds of thousands back for training and tuition related expenses such as registration, tuition and books.

The policy requires that all employees — fire and police personnel excluded — who seek reimbursement for mileage costs obtain a “city driving permit,” and employees who drive for city business must complete a defensive driving class.

“This course aims to provide employees with the knowledge, skills, and techniques to prevent collisions and reduce future traffic and moving violations,” said the audit. “Employees driving for city business are required to take this course once during their city career.”

Many employees had not obtained a city permit or taken the required course, but got reimbursed for mileage fees. At least 150 individuals from 20 different departments had not completed the course, but received approval from management to receive a reimbursement, costing the city $24,000. Management uses a city roster to verify whether an employee is eligible for a reimbursement if he or she had completed the driving course, but the audit detailed that the city roster was not up to date.

“In some cases, employees had not completed a required defensive driving training to receive the permit; in other cases the city’s tracking of employees who had completed the training was not accurate,” wrote Rois. “Also, timekeepers did not always appropriately review mileage reimbursement requests prior to approval.”

“Timekeepers,” or supervisors that approve reimbursement requests at the city’s finance department, failed to ensure that an employee’s reimbursement form was accurate in some cases. Some employees received their reimbursement before turning in the form to get paid, making it difficult for those supervisors to verify that mileage was “accurate and appropriate.” The city does not currently train supervisors on the process.

“The finance department appreciates the work of the city auditor’s office and we are open to recommendations to improving the service we provide to the organization,” said Julia Cooper, the city’s director of finance. 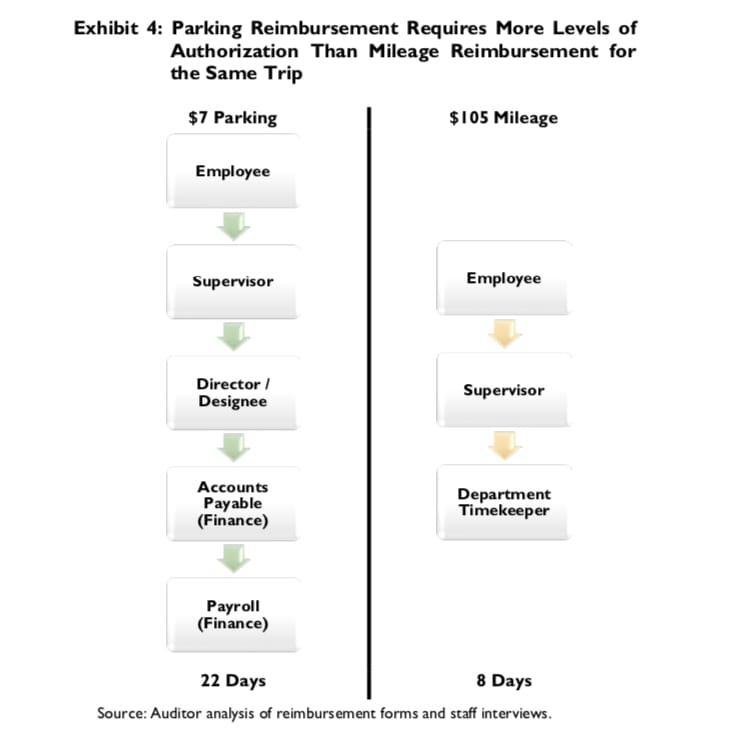 Rois’ office also found that due to a long approval process for some types of reimbursements, many employees were waiting weeks before they were reimbursed for payments as small as $7.

Approvals for reimbursements differ by the type of reimbursement that an employee is requesting, which means that some requests go through as many as five or six different supervisors and departments before an employee can expect to get their money back.

Smaller reimbursements, such as parking, tolls and local transportation, require a longer approval process. The report states that those expenses accounted for about 20 percent of all reimbursement requests.

“Even though the average amount of a parking, toll, or local transportation reimbursement was about $13 for each item, in many instances, the time spent by multiple approvers may have exceeded the value of these small reimbursements,” Rois said in the report. “In the interest of efficiency, the City should review and simplify this process.”

But that wasn’t the case for everyone. Some larger reimbursements only needed approval from one manager, which means that employees got their money back in a week or less. In one example, an employee drove to a conference in Sacramento and requested a $105 reimbursement fee for travel expenses, which only needed to be approved by one supervisor and was reimbursed in the employee’s next paycheck.

In response to these findings, the city auditor provided a few recommendations to strengthen the city’s policy while also updating and tracking the accuracy of the employee roster, implementing an electronic reimbursement system, simplifying the approval process, and developing stronger policies that better train staff who reimburse employees.

The city auditor will report the findings to the City Council at its Aug. 27 meeting.