San Jose State University leaders on Monday announced they will suspend classes through Friday due to concerns about the coronavirus outbreak.

University president Mary Papazian broke the news in a letter late Monday just as Santa Clara County officials announced the first death in the county from COVID-19, the disease caused by coronavirus. There are 45 confirmed cases, officials said.

Papazian said she consulted with California State University Chancellor Tim White along with union leaders, the Academic Senate and student body before deciding to cancel classes. The campus, though, remains open for normal business, she added.

“This decision is meant to slow the spread of COVID-19 in our community, reduce the potential of people being infected, and protect those who are most vulnerable to severe illness,” Papazian said in the letter.

In an update Saturday, the university said there are no confirmed coronavirus cases at the downtown San Jose campus.

At a Monday evening news conference, Santa Clara County health officials announced a mandatory order banning mass gatherings in the county until the end of the month due to coronavirus.

The three-week order — meant for gatherings with more than 1,000 people in attendance — is scheduled to take effect at midnight on Wednesday, and is enforced by the county sheriff’s office and local police departments, according to county officials.

“This is a critical moment in the growing outbreak of COVID-19 in Santa Clara County. The strong measures we are taking today are designed to slow the spread of disease,” said Dr. Sara Cody, Santa Clara County health officer, in a statement. “Today’s order and new recommendations will reduce the number of people who develop severe illness and will help prevent our healthcare system from becoming overwhelmed. This is critically important for anyone with healthcare needs, not just those most vulnerable to serious illness from COVID-19.”

Believed to be among the first in the U.S., the county order does not include “normal operations” at airports, shopping malls, centers or other areas with mass gatherings where people may be “in transit.” It also doesn’t apply to areas like office environments and retail or grocery stores where large numbers of people gather without getting too close to one another.

Cody encouraged people to stay at home as much as possible, avoid travel on planes or cruises and stay away from crowds. 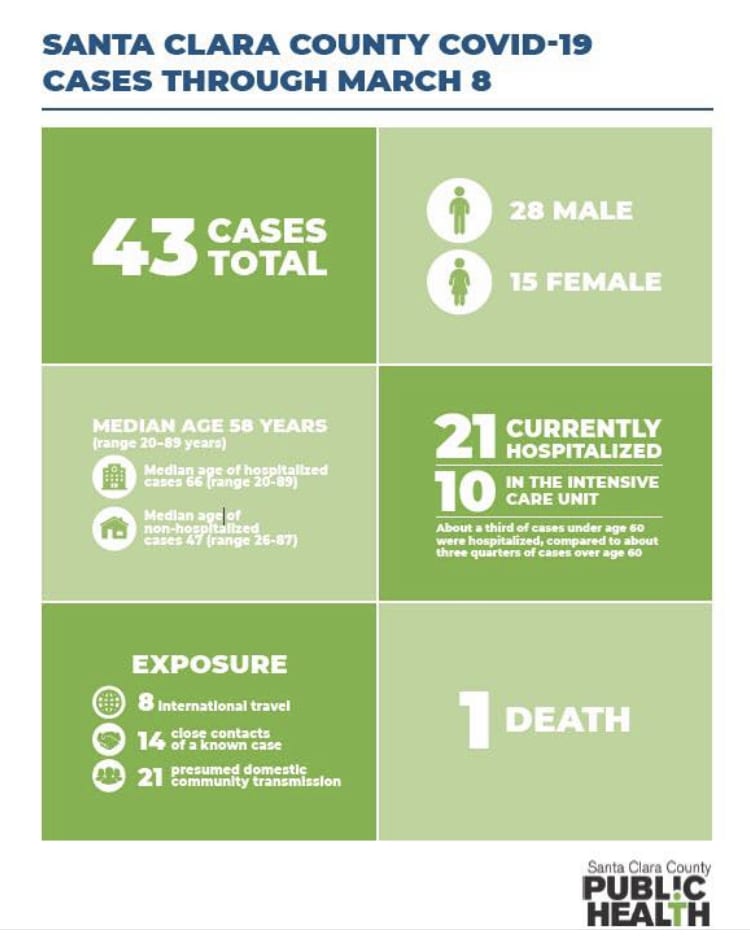 Meanwhile, San Jose officials declared a stage four pandemic, limiting crowds at City Hall and opening its emergency operations center. Mayor Sam Liccardo also announced a measure to prohibit evictions of renters who lose their income because of the virus.

“These are trying days and the weeks ahead are going to be difficult for everyone in our community,” Liccardo said. “And I’m confident that if we take care of each other and we work together, we are collectively stronger than this virus.”

San Jose State’s closure is the latest in a string of major campus closures, including Stanford University, University of California, Berkeley, Santa Clara University and San Francisco State University which have all suspended in-person classes and switched to remote instruction.

Beginning March 16, instruction at San Jose State is scheduled to resume as online classes or “distributed,” meaning they could include live lectures from faculty offices or distributed materials returned to instructors, until March 27. Faculty must obtain permission to teach traditional in-person classes, Papazian said in the letter.

“We understand this is a time of great uncertainty,” Papazian said, “and we appreciate the contributions and patience of the Spartan community as we continue to work through the changing landscape caused by the COVID-19 outbreak.”