BusinessHousing
by Carly Wipf
Downtown San Jose is pictured in this file photo.

As the long-awaited decision to charge commercial developers fees for affordable housing heads to the San Jose City Council Sept. 1, a feasibility study — along with a global pandemic — suggest the fee could be a death knell for business growth.

Nevertheless, proponents of the Commercial Linkage Fee are turning up the heat. They had planned to stage a rally Aug. 20 and deliver “invoices” to corporate developers to make their point. But because of bad air quality, the rally was postponed to 11 a.m. Aug. 26.

Proponents say the linkage fee, which is charged to developers to fund new housing projects, could generate more than $750 million for affordable housing in the coming years. They want Silicon Valley’s richest corporations step up and do their share to solve the housing crisis they helped create.

A Feasibility Analysis, prepared by consultant Keyser Marston Associates, looked at the consequences of charging fees on commercial development. It found businesses were willing to pay up to $30 per square foot in commercial linkage fees when surveyed before the pandemic. But now that the economy has plummeted, things are different.

“Due to heightened economic uncertainty … several developers now maintain that a fee of any amount has the potential to deter commercial development activity during the economic recovery,” the report states.

San Jose could lose development opportunities and the resulting funds to funnel toward affordable housing, the report warns.

Retailers and hotels specifically are more reluctant to develop in San Jose as people avoid traveling, shop online and work from home to remain socially-distant, according to the report.

The outlook is surprisingly less grim for industrial spaces, whose rent has remained largely unaffected by COVID-19. As e-commerce operations grow, the survey found demand for warehouses could increase. These projections resulted from follow-up interviews the consultant conducted with developers post-COVID-19 but estimates for how much businesses were willing to pay came from surveys before April.

The buildings subject to the new fee include office, retail, hotel, industrial, research and development, warehouse and residential care.

Downtown developers surveyed in a pre-COVID-19 scenario found $30 per square foot to be a reasonable fee amount for a high-rise building. A study released last month found the fee necessary to support the housing costs related to the new development ran much higher at $176.

“There’s been only one high-rise office project that has broken ground in the downtown in more than a decade,” Mayor Sam Liccardo said. “And so we need to find a way to both elicit a fee that will be used to build affordable housing and ensure that we don’t stunt all developments in downtown for another decade.”

Calls for a new study

The Silicon Valley Organization, the area’s largest chamber of commerce, denounced the study for using data taken prior to the pandemic and said the city should redo it to reflect the current economy.

“The study basically says that hotels can bear, in some parts of the city, $15 per square foot. That is probably not going to be true in this environment at all given that nobody is traveling, nobody is going to be using or having a need for those hotels at least in 2020 or after,” said Eddie Truong, SVO director of government and community relations.

Today the city charges linkage fees of about $18 per livable square foot on residential developments only — not commercial. 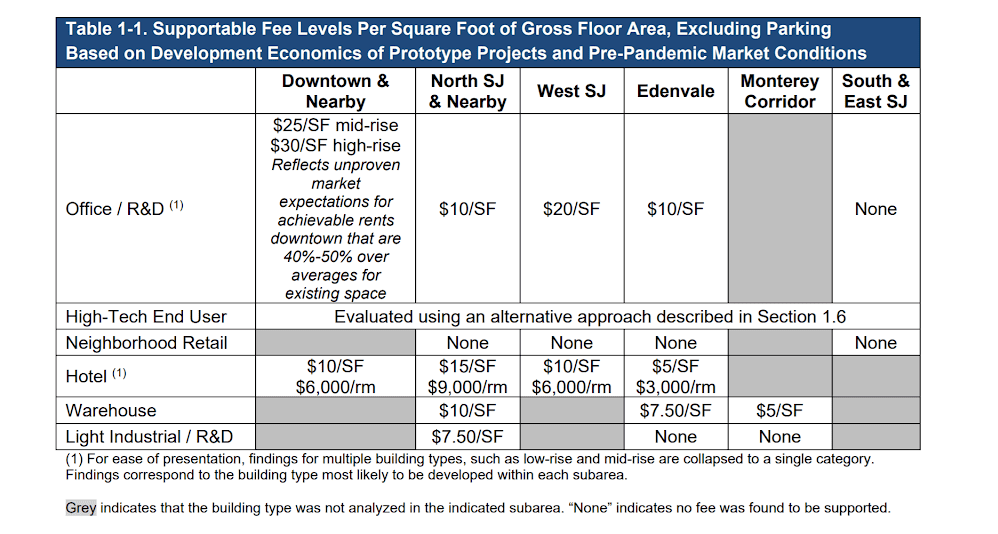 “This is probably the worst time possible to be thinking about putting commercial impact fees on businesses when the unemployment rate is so high and most of the big employers are actually thinking twice about building new office buildings and having their employees work from home via Zoom,” Khamis said.

Khamis said other taxes, such as the county’s Measure A, already put the burden on businesses to fund affordable housing.

The report found some office developers still think San Jose is a good place to build as soon as 2021 if the economy picks back up.

“Google is expected to lock in its development agreement in the coming year,” said Mathew Reed, policy director for Silicon Valley at Home. “And that’s a tremendous impact on the city and on downtown and, frankly, it creates momentum for growth. We can’t afford not to respond to some of an increased demand for affordable housing.”

Families being pushed out

According to a 2016 Working Partnerships USA study, most workers can’t afford the median Silicon Valley rent of $2,850 per month. The average blue-collar worker makes an average annual income of $19,000. White collar workers average $53,200 per year, the report said, meaning they can only afford $1,330 in rent.

Developers supported gradually phasing in commercial linkage fees over several years and deferring payments until the spaces are occupied. If fees are deferred, the money to fund affordable housing will be as well.

The Santa Clara County Eviction Time Bomb Report found more than 43,000 people in the county are at risk of losing their homes as a result of the pandemic. Robert Aguirre, a San Jose housing advocate, said he’s fought for years to charge corporations and businesses fees to keep families from facing homelessness or eviction.

“A lot of these people are being pushed out because they can’t afford to pay rent … I’m trying to make sure that people don’t become unhoused,” Aguirre said. “Anything that helps that situation is something that I’m going to be pushing for.”

A previous version of this article stated the fee could generate $3.5 billion for affordable housing projects. The correct number is $750 million.