This election saw the public turn out like never before in Santa Clara County.

On Nov. 3, about 59,000 people countywide cast ballots in person. Counting mail-in ballots, the Registrar of Voters received more than 692,000 ballots, more than double the numbers from 2016.

Election Day at Mexican Heritage Plaza started out poorly as all of the cardboard “Vote” signs had been torn down, but undaunted poll workers had them replaced by 8:30 a.m. Twice during the day, their printer ran out of ink, but technicians from the ROV came and replaced it.

That perseverance continued throughout the day as long lines gathered, snaking through the plaza from 2:30 p.m. on, and resulting in wait times of more than 40 minutes.

Although there was concern the Latino population of East San Jose wasn’t voting early in the day, people showed up in droves after work.

To encourage people to turn out to vote, the Si Se Puede! Collective offered free food to voters in “a solidarity action to feed, educate and protect our community and build a deeper democracy,” a flyer stated.

Wearing “Power not Fear” T-shirts, volunteers handed out masks, information on COVID-19 and voters’ rights, as well as burritos, bananas and water.

“Our vote is crucial nationally but most important locally,” said Olivia Ortez, with SOMOS Mayfair. 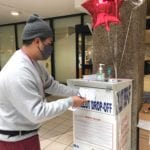 Dion Flores, 24, of San Jose drops off his ballot, saying he wanted to “participate in voting as it’s important to be heard.” Photo by Lorraine Gabbert. 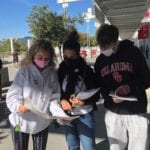 Cindy Ponciano and her daughters, both 18, look over ballot information at Levi's Stadium before voting. Ponciano said she felt safe from the pandemic because people were wearing masks. Photo by Lorraine Gabbert. 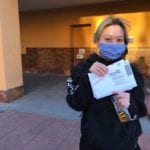 East San Jose resident Melissa Trang said the wait times at the Mexican Heritage Plaza did not deter her from voting. Photo by Lorraine Gabbert. 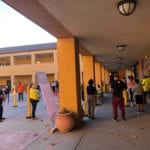 Voter lines at the Mexican Heritage Plaza in East San Jose grow as the day wears on. Photo by Lorraine Gabbert.

No matter if they were 18 or 74, voters from all corners of Santa Clara County said being heard was important.

“It was a really cool experience. I always wondered what it was like to vote,” said first-time voter Devin Ponciano, 18.

John Nguyen, 74, of San Jose, said he didn’t want to throw away his vote.

Dashawn Martin, 26, of Milpitas, who works in retail, said his grandfather told him it’s important to vote and “make our voices heard.” Martin said there is a big youth movement for voting, especially with skateboarders.

“It’s important to make a change,” Martin said. “We can progress and still have a say-so. It’s about progress not perfection.”

More than 1 million people registered to vote in October representing 83% of the total 1,204,687 eligible voters in Santa Clara County.

Conditional voter registration allowed new voters to join in the election past the Oct. 19 deadline, all the way up to Election Day. This allowed younger voters, who turned 18 close to Nov. 3, to vote, as well as newly naturalized citizens.

Anne Elkholm, 50, a researcher and San Jose resident, became a naturalized citizen the day before Election Day and proudly came to the ROV to register to vote and cast her ballot, hoping for a change in leadership.

“I’m really excited to vote this year, especially,” she said. “It’s important to vote because of employment and COVID. It hasn’t been handled well.”

Many young people expressed concerns for the future under the current administration.

Jacob Martinez, 27, an MRI technologist, and Ashley Bruch, 28, a hairstylist, who both live in San Jose, said they are scared for the future.

“We want to make sure the country is going in the right direction,” Bruch said.

Bruch, who worked as a Lyft driver, also said Prop. 22 mattered as drivers should be able to make their own hours, which is essential for students or those with part-time jobs.

Quise Mojo, 34, a San Jose resident working in real estate said he was horrified by recent racism in the Bay Area and countrywide and blames President Donald Trump.

“The president is supposed to be a role model,” he said. “Make America Great? When wasn’t America great?”

Mojo said it’s important to vote and change the political climate for the youth. “We don’t need that hate,” he said.

But not everyone was looking for a change.Jimmy Tran, 49, a tech-industry worker, said it was important to vote for Trump.

“I’m an immigrant, so voting is very important to me,” Tran said. “We have the best president we’ve ever had. I love this country. I want to follow the laws and the constitution. This is the greatest country on Earth.”

Through the Voter’s Choice Act, registered voters received ballots in the mail. Countywide, 98 drop boxes were another option in addition to voting in person

Levi’s Stadium provided a voter center this year, much to the delight of 49ers fans.

The Ponciano family from Santa Clara — Cindy and 18-year-olds Devin and Alexa — were excited to vote together in this election, especially at Levi’s Stadium.

“We are huge fans,” Cindy Ponciano said. “So, coming here with my kids for the first time is pretty cool. I wanted them to experience this…I wanted them to take it all in.”

Cindy Ponciano said she wasn’t concerned with voting during the pandemic. She and her children, as well as everyone else at Levi’s Stadium, wore face masks.

“We can go out to restaurants and food shopping,” she said. “As long as we’re careful we’re fine. The pens here were sanitized and they had hand sanitizer. We’re 6 feet apart. I wasn’t concerned at all.”

However, Cindy Ponciano said she was concerned with the political divide of the country.

“I’ve never seen anything like this,” she said. “We’re part of the United States, so we should be proud we can vote, regardless of who is elected.”