A recent campaign mailer from San Jose Councilmember Lan Diep urges voters to support Joe Biden and himself — a “fellow Democrat” — but records show Diep joined the party just seven months ago. Before that, he had no party preference and was a registered Republican for seven years.

Diep, who faces a tough re-election battle next month, changed to Democrat just nine days after he came in second in the March primary election, trailing longtime Democrat David Cohen by more than 3 percentage points.

Diep at one point was one of three Republicans on the San Jose City Council, along with Councilmembers Dev Davis and Johnny Khamis. While his two colleagues publicly left the party in June 2018, citing Donald Trump’s divisive immigration policies, Diep stayed mum. He remained a Republican from Aug. 2012 to March 2019, according to records, until he quietly switched to “no party preference” on March 18, 2019 for a year, according to data from the county elections office.

He switched to Democrat on March 12 this year.

Despite San Jose elections being nonpartisan, local Democrats say the timing is suspicious.

“He’s spent years on the council taking Republican votes, whereas David Cohen, his opponent in this race, has spent those years helping to build and strengthen the Democratic Party and yet Lan Diep is sending mailers to people in the district, asking them to support him as a ‘fellow Democrat,’” James said. “I don’t know which Democrat he’s a fellow with, but we’ve never seen him. He never shows up and we haven’t heard from him or seen any real alignment with Democratic values.”

James said Diep has a pattern of siding with big developers and opposing rent control — Republican values, according to James.

Diep told San José Spotlight he stands by his new party affiliation and cited his work in 2012 on Barack Obama’s reelection campaign in Nevada — a swing state. He said his efforts helped preserve progressive policies such as the Affordable Care Act.

He added the Santa Clara County Democratic Central Committee “should waste less time debating what a good Democrat is and, instead, just be one.”

“Local party bosses don’t get to decide the litmus test for being a Democrat,” Diep said. “Especially not when they use local, nonpartisan offices as a measuring stick. Let them spend their time sitting in judgement of others. I will focus my energy on doing right by the people of San Jose.”

The mailer features a photo of Diep shaking Biden’s hand with large text that urges voters to vote for the presidential hopeful. It says that Biden has not endorsed Diep, but Diep “sure as heck endorses Vice President Joe Biden.”

“And to give our next president the allies at the local level he needs to help America Build Back Better, re-elect fellow Democrat — Councilmember Lan Diep — to the San Jose City Council,” the mailer continues. The back of the mailer features a quote from Obama and touts Diep’s work on his campaign. 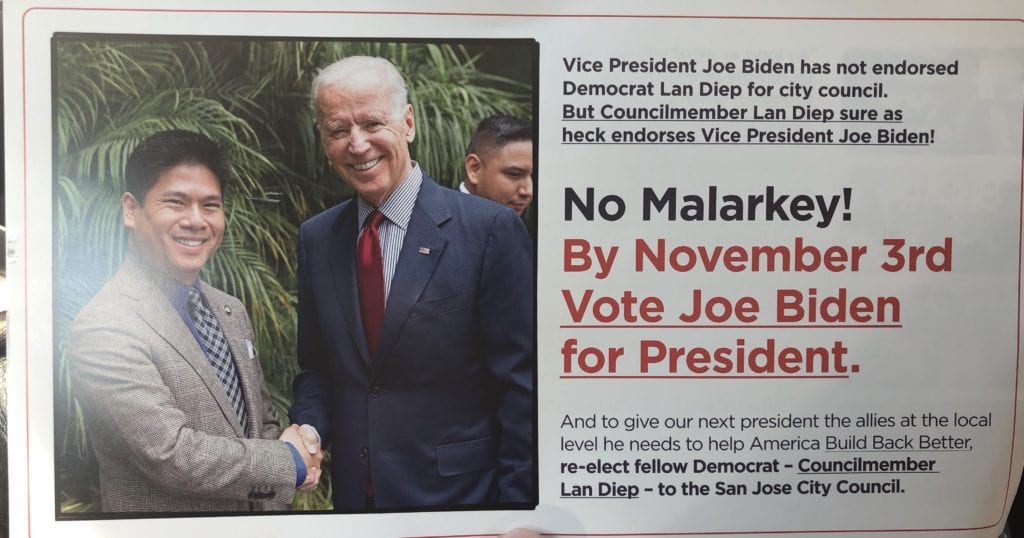 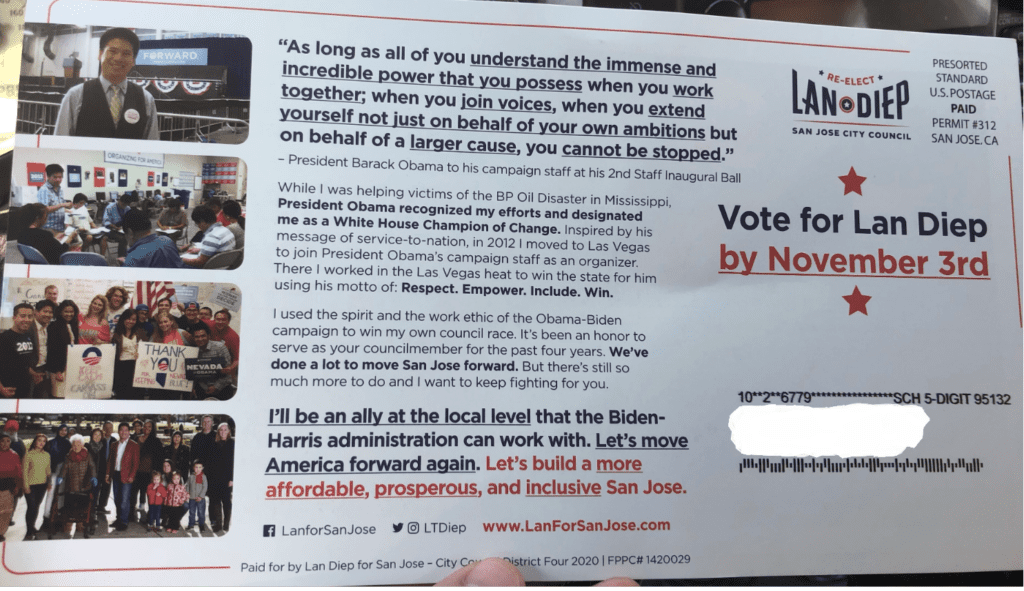 The question, according to officials at the Federal Election Commission, is how Diep paid for the mailer supporting a federal candidate like Biden. FEC regulations stipulate that if a “public communication” refers to or promotes a federal candidate, it must be paid for using federally permissible funds — that means no union or corporate money.

Federally permissible funds are those that comply with the limits, prohibitions and reporting requirements of the Federal Election Campaign Act of 1971.

Diep’s most recent campaign report shows support from prominent developers such as Trammell Crow Company and Urban Community, and individuals who work for tech corporations such as Adobe, Facebook and Cisco.

Myles Martin, a spokesman for the FEC, told San José Spotlight he could not comment on specific mailers or potential cases.

“If someone believes that a violation of the law has occurred, they would be free to file a complaint with the FEC,” Martin said.