HousingSan Jose
by Annalise Freimarck
A San Jose home going through renovations is pictured in this file photo.

Without her grandma’s house to fall back on, San Jose resident Gem Schou and her parents would be forced to move out of Santa Clara County or move from house to house, renting.

Schou, a 19-year-old cashier, believes the housing shortage in Santa Clara County is a crisis. When she moves out of her grandma’s house, she said she’ll be forced to leave the Bay Area because of the county’s cost of living.

“I would never be able to afford a house here, so I would have no choice but to (move),” she said.

Schou’s concerns reflect a larger sentiment shared by most residents in Santa Clara County– the cost of living in the county is too expensive, leaving residents disillusioned and unhappy with the area’s quality of life for several years now. 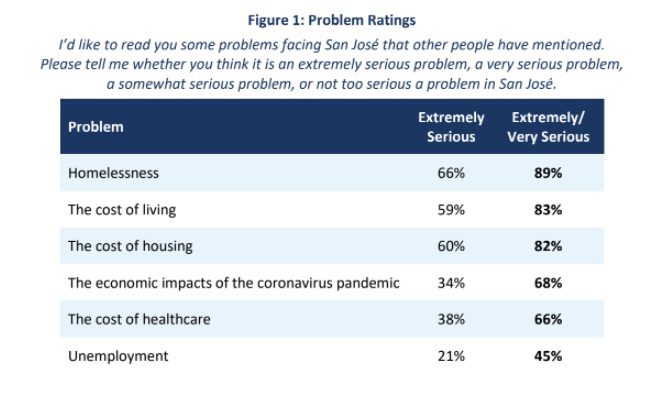 The poll, conducted by Fairbank, Maslin, Maullin, Metz and associates, randomly surveyed 819 Santa Clara County voters via phone and online surveys from May 11 to May 16. The survey conducted interviews in English, Spanish and Vietnamese, with a 3.5% margin of error.

David Low, a spokesman at Destination: Home, a nonprofit focused on ending homelessness in Santa Clara County, was not surprised by the results.

“This crisis has been many years in the making,” he said. “We have continued to see far too many of our low-income and vulnerable neighbors pushed into homelessness or pushed towards the brink.”

In Santa Clara County alone, the median list pricing of a house averages at $1.3 million, and according to the American Community Survey conducted by the U.S. Census, in 2019, rent averaged at $2,392 a month.

But, according to the same American Community Survey, the average household annual income was only $133,076.

The poll also found 66% of voters characterized housing as a crisis — that’s up 19 points from 2018.

Still, only 14% of respondents said they consider housing a crisis that “cannot be solved.”

Schou said she believes that skyrocketing housing costs favor the rich and push out the average resident.

“I feel like the only way you could buy a house in this area is if you’re the CEO of Apple, or a doctor or a lawyer,” Schou said. “If it keeps getting raised, then we’re going to have a ton of doctors and lawyers in this area, but not the essential workers that we really need.”

The cost of living in Santa Clara County has already led to a sharp decline in population.

San Jose lost 1.26% of its population, an estimated 13,000 people, from 2019 to 2020, according to the U.S. Census Bureau. Some prominent ethnic leaders, including the local NAACP president Jeff Moore, say the region is seeing an exodus of essential workers and people of color. Moore himself fled San Jose for Atlanta, where he said he could afford to buy a home.

Heidi Strausl, 17, a grocery store bagger and resident of Los Gatos, said once she moves out, the cost of living will impact where she lives in the future.

“I definitely don’t see myself having a future in this area, no matter how well off I am,” she said. “I just do not think it’s worth it to have to pay so much for a house and getting so little.”

Low believes that while the housing issue is complex, residents and the local government can take proactive actions to aid the crisis, such as rent relief and prolonging evictions. Congressional leaders are also exploring universal housing vouchers as a potential solution.

“We as a community need to come together to tackle those root causes if we’re going to reduce homelessness and ultimately end homelessness in our community, and make sure that this is a community where people of all incomes, ages and backgrounds can afford to live,” he said.

Some San Jose residents to pay more for water