Housing
by Carina Woudenberg
Renascent Place, a complex for formerly homeless residents funded by Measure A, is pictured in this file photo.

After 17 years of being homeless in San Jose, a woman who identifies herself as “Fireball” was thrilled when she learned in April that she had a spot in a homeless housing development project that was underway in the city.

“I’ve been dreaming and wishing for a place to live,” said Fireball — who received her nickname from a staff member involved in the Renascent Place housing project which is due to open its doors to residents on Feb. 18. She declined to provide her real name. “I guess I never gave up.”

Fireball lives in her recreational vehicle where she’s stayed for the last seven years. Before that, she lived out of her truck. She suffers from a variety of health conditions, she said, including asthma and tendinitis and is living on disability benefits. Over the years, Fireball said she’s been abused, raped and almost killed.

Now that she’s going to have a secure place to call home, Fireball said she can finally envision a better future for herself — working out more, taking her two dogs to the onsite park and holding a Bible study in a community room or the neighboring courtyard.

“If there’s a will there’s a way and God has something great for me,” she said.

Located at 2450 Senter Road, Renascent Place is the result of a multi-agency partnership several years in the making. The complex, which was funded by a combination of state and local resources, is one of dozens of new initiatives and housing developments from city and county officials to make a dent in Silicon Valley’s homeless crisis.

Residents moving in later this month will be housed in 360-square-foot studio apartments. Under Section 8, they will pay a third of their income for rent, in addition to the cost of utilities.

The roughly 2.5 acre site contains 160 units and a host of other amenities including a bicycle repair training facility operated by Good Karma Bikes, a multi-use community room and a spacious courtyard with workout equipment, barbecue grills and planters for growing fruits and vegetables. 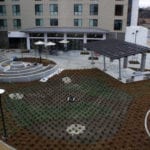 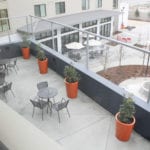 A patio above the laundry room provides residents with an additional outdoor hangout space. Photo by Carina Woudenberg. 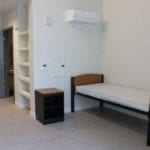 Each unit is approximately 360 square feet. Photo by Carina Woudenberg.

“One of the things we’ve been trying to accomplish is to provide space on the site to hang out and have things to do,” said Kathy Robinson, director of Housing Development for Charities Housing, which has led the project.

Robinson provided San José Spotlight with a tour of the site in late January as construction was still wrapping up.

Work at the site began in December 2017 and has been crafted to accommodate the population it’s intended to serve.

“We spent a lot of time studying other developments in Southern California, San Francisco and Utah,” Robinson said. “This is new for San Jose.”

In an effort to prevent fires and floods, Renascent Place has unique features such as a stove that stops residents from forgetting it’s on and faucets that run only when a person’s hands are under them. Security is also a top priority for the site with one guard stationed in a front office and another roaming the site at all times.

The $56 million project received funding from a variety of sources including the county of Santa Clara and California’s Affordable Housing and Sustainable Communities Program.

The $14 million state grant was divvied up to create environmentally-friendly features in the building and a new streetlight while the other half will be used to connect the Coyote Creek Trails from Story Road to Phelan Avenue and Phelan Avenue to Tully Road. The funding will also pay for hiring more park rangers and planting 100 new street trees along Senter Road.

The property will be managed by John Stewart Co. and Abode Services, which will provide case management, health and wellness services and benefit assistance on site. Both companies also oversee the Second Street Studios, though a recent San José Spotlight report highlighted how they’ve come under fire for doling out hundreds of lease violations and threatening formerly homeless residents with eviction.

Vince Russo, senior program manager for Abode Services, says the project and others like it are key to improving the lives of San Jose’s most vulnerable residents.

“There’s individuals like Fireball who have gone through a lot of trauma, a lot of stuff in their family,” Russo said. “Everybody needs a place. I think it will make it a better place in San Jose.”