For the fourth year in a row, less than half of San Jose residents surveyed by the city would rate their quality of life positively or recommend San Jose as a place to live, according to the 2019 National Community Survey.

The new report found only 44 percent of those surveyed would recommend San Jose as a place to live; 64 percent plan to stay here and and the overall quality of life has fallen to 43 percent — a 20 percent drop in the last eight years. The report gauged the opinions of 4,388 San Jose residents who responded to either a mail or online survey.

The cost-of-living in San Jose, the availability of affordable housing, traffic flow on major streets, ease of travel on public transportation and variety of housing options were the five lowest rated community characteristics. Three in four respondents said cost-of-living is “poor.”

Despite the dismal quality of life ratings, 64 percent of respondents still said the nation’s tenth largest city is a good place to work though just 13 percent plan to retire here. The top five rated community characteristics in San Jose were shopping, volunteer and employment opportunities along with San Jose’s “openness and acceptance” and opportunities to participate in spiritual events.

San Jose Mayor Sam Liccardo was unavailable for comment on the new survey, but officials from his office said the survey plays a role in allocating public funding to city services.

“We appreciate the work of the City Auditor on this annual report,” said San Jose spokeswoman Rosario Neaves. “We are always interested in trends and comparisons and value this research, especially as we enter the annual budget process. This information is important as we continuously strive to improve our service delivery.”

The median household income increased to $113,000 and the unemployment rate declined to 2.7 percent, according to the report, but the cost-of-living in San Jose is still among the highest in the nation.

A living wage in San Jose and the surrounding area for a single working adult in 2018 was $38,500 and $92,000 for a family of four, which estimates costs for food, housing and transportation, but not expenditures like retirement savings or purchasing a home. Despite an average income of $80,000 in San Jose, the report found 15 percent of households earned less than $35,000 — even after San Jose bumped up its minimum wage to $15 per hour at the start of the year.

Shirley Bolton, a Santa Clara County social worker who earns around $77,000 annually, agrees that the cost-of-living has diminished the quality of life in San Jose.

“Unless you are an engineer at Google or Apple making over $150,000, you can’t really afford to live here,” Bolton said.

The 30-year-old used to live in Santa Clara with her sister, paying $3,000 for a 2-bedroom apartment. After her living situation changed, she found a 2-bedroom on her own for about $2,300. “I feel blessed because I don’t have roommates, especially with an 11-year-old,” she added.

Regardless of income, the report said only 22 percent of residents expect that the economy will positively affect their income in the next six months – a 10 percent drop from 2018’s report.

This year, SJSU participated in the National Community Survey for the first time. Around 700 students, faculty and staff filled out a shortened survey, and many responses were similar to citywide numbers: 65 percent of students rated the city as a “good” or “excellent” place to work, 45 percent ranked the quality of life positively and shared the same top three priorities.

Only 40 percent of SJSU responses, however, rated San Jose as a “good or excellent” place to live. 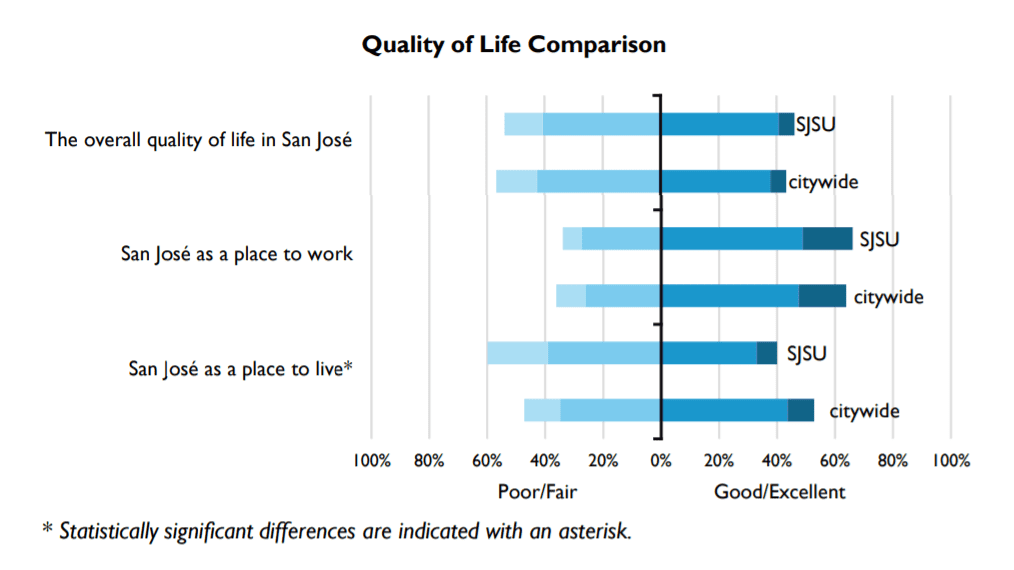 Forty-six percent of SJSU respondents rated the overall ease of getting to and from the university as “excellent” or “good,” and generally favored alternatives to driving — such as taking public transit.

“I think the fact that students have access to free VTA really makes transit a lot more attractive, so I think that’s probably why it’s a little bit higher for students,” said SJSU student and transit advocate Monica Mallon.

One of the lowest-rated measurements of the survey was the availability of quality affordable housing — 82 percent of residents gave it a “poor” rating. According to the report, 34 percent of homeowners and 50 percent of renters in San Jose report spending more than 30 percent of their income on housing costs.

Quinn Bugner, 24, a nurse at Stanford, said she and her husband had a difficult time finding a place to live when moving here for his nonprofit job. While she describes her studio apartment as “decent,” it rents for $2,200 a month.

Rents for renter- and owner-occupied housing have remained steady in recent years, at 45 and 55 percent respectively, while another estimated 6,100 residents in San Jose are without a home at all.

“I couldn’t imagine if we didn’t have the income we did,” Bugner said. “I feel like we honestly would’ve considered some other place if we had known.”