Ousted San Jose City Councilman Tam Nguyen isn’t planning to disappear now that his one term on the council is over.

In a recent interview with San José Spotlight, Nguyen said he plans to continue working on finding solutions to issues like affordable housing and homelessness as a community member. Nguyen, 62, lost his bid for re-election to represent San Jose’s District 7 in November by 1,713 votes to Maya Esparza.

Nguyen says the “blue wave” that swept the nation during the midterm election also made ripples in local elections like the one for San Jose City Council. “This year we had record turn out and a lot of them were Hispanic,” Nguyen said.

He was supported both in his first election and in the November midterm by the Vietnamese American community in San Jose. But Councilman Lan Diep agreed that voter turnout played a part in Nguyen losing his seat to a Latina challenger.

“I do think the turnout was different from past elections,” Diep said. “We saw a lot of people who never vote turn out and that had more to do with national issues, but it has definitely had an impact locally.”

Even though District 7 has a high concentration of Vietnamese American residents, Diep said, “this time the Latinos showed up.”

Nguyen said his loss is unrelated to his sometimes controversial and contradictory stances on issues like affordable housing. Nguyen was the deciding vote against reducing the cap on rent control increases from 8 percent to 3 percent. He voted in favor of implementing a law to protect renters from being evicted without cause, but only after they live in an apartment for 9 months.

Nguyen also came under fire in 2016 when he voted against an affordable housing complex at 2500 Senter Road, which he had said he would support.

Nguyen said he voted against the project because the community’s concerns were being ignored. He also believed that the complex should not be 100 percent for homeless individuals, and encouraged building a mixed use development to address the city’s housing shortage.

“I understand that we are trying to help tenants as much as possible, but let’s find real solutions,” Nguyen said. “We need to find more housing solutions for everybody, not squeezing the housing providers the way we are.”

Housing advocates in San Jose, like Shaunn Cartwright, think Nguyen’s shifting votes on housing led to voters replacing him in November. She said many in the housing community felt like “there was a trust broken.” 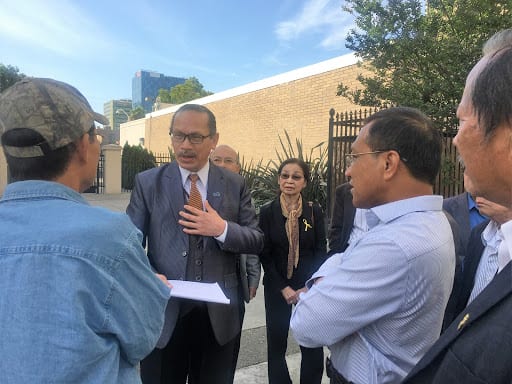 Nguyen has lived in San Jose for 38 years, and has been involved in the community in a variety of ways. He said he joined the council without an agenda for what he wanted to work on, but knew public safety and clean neighborhoods were important to residents in his district.

He has offered his personal contact information to residents wanting to host cleanups in their neighborhoods, which he helped facilitate and participated in.

Nguyen says he didn’t realize how serious housing, transportation and homelessness issues were until he had been sworn into office. It took City Hall a while to get creative with housing solutions for the homeless, he said.

“It took City Hall three years to really change slowly and realize that we cannot provide housing for regular people, let alone people who are homeless,” the councilman said. “So we are still working on safe car parking and tiny homes.”

He had advocated for city-sanctioned homeless encampments on empty city properties. A pilot encampment called “Hope Village” was set up on a property in Sept. 2018, in collaboration with the county.

Nguyen said many people who are homeless and struggle with mental illness or substance abuse might be a better fit for city-sanctioned encampments instead of being sent to shelters.

Nguyen added that Hope Village should have happened two to three years ago, and others like it should be expanded across the city.

Diep echoed a comment from a resident that Nguyen will be most remembered for being the “deciding vote” to bring a just-cause eviction policy to San Jose.

Vietnamese residents might remember him for moving the ball on getting a Vietnamese Heritage Garden and the Vietnamese Cultural Center in San Jose, a longstanding promise to the community dating back to former Mayor Chuck Reed.

Diep said Nguyen served an important role on the council, despite frustrating others with his swing vote.

“You never knew how he was going to come out and he would sometimes contradict himself, but I think he served an important democratic function in that he encouraged compromise and he let both sides win,” Diep said. “To the extent that Nguyen would jump back and forth and would allow this side to win or that side to win, that was overall good for democracy in San Jose.”

We can’t do this without your help.

You have Successfully Subscribed!

We use cookies to ensure that we give you the best experience on our website. If you continue to use this site we will assume that you are happy with it.Ok