Riders say they were heartbroken when Silicon Valley leaders recently voted to end a bus route that zig-zags through the city across a dozen neighborhoods serving seniors, people with disabilities and students at San Jose State University and San Jose City College.

Linda MacLeod still rides the Route 65 bus. That route represented independence at a time when she needed it and taking it to work was a joy. Riding it now just makes her sad.

“I don’t really know what I’m going to do,” MacLeod told San José Spotlight. “I know what my options are, but none of them are good alternatives for me.”

MacLeod, a 55-year-old attorney, relied on that route for more than a decade after she had to give up driving because of Usher’s syndrome, a condition that’s causing her vision and hearing to deteriorate. And although her condition forced her into early retirement three years ago, MacLeod says the route improves her quality of life.

“For someone like me who is visually impaired and going blind being independent is very important,” she said. “The most convenient thing would be to take a Lyft or an Uber, because I’m not destitute. But it’s not the same as being able to independently use public transportation.”

The Valley Transportation Authority Board of Directors voted 8-2 on Aug.1 to end the 65 bus route after BART opens its Berryessa Transit Center at the end of the year.

The motion to put the brakes on the route was made by Downtown San Jose Councilmember Raul Peralez and seconded by county Supervisor Cindy Chavez. 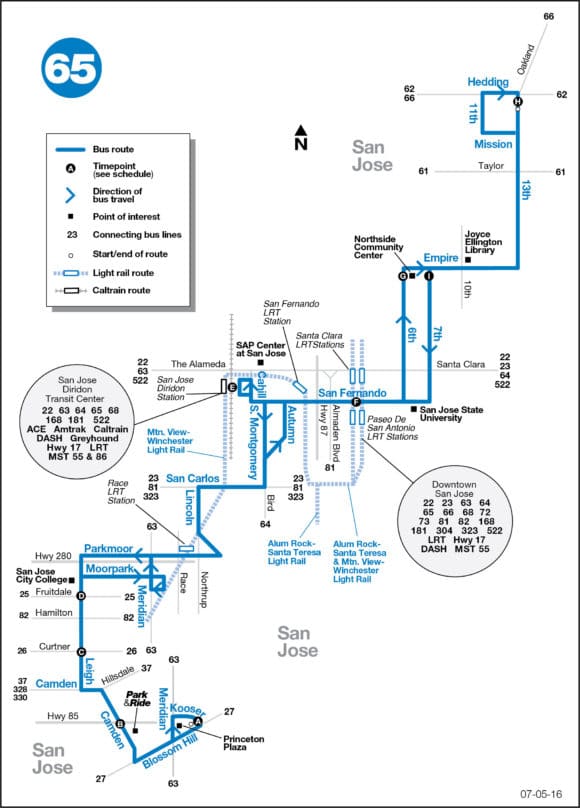 “Clearly we are all having a tough time stomaching this because cutting routes is not part of the core mission of this agency — we want to improve and increase our services — and hopefully the decisions we are making now will allow us to do that in the future,” Peralez said during the meeting.

Carrasco said she couldn’t imagine “imposing that kind of hardship on someone who is already struggling to make ends meet.”

But MacLeod said losing Route 65 was no accident. She claims VTA officials for years have neglected the route and under-invested in the service, leading to its demise.

In a recent letter, MacLeod accused VTA staff of plotting to kill the line for years — reducing service, raising fares, failing to properly market it and other changes that drove down ridership. She also says transit leaders rushed the vote to eliminate the route, moved the meeting location and did not take the concerns of riders into account.

“The process didn’t feel fair to me,” MacLeod said. “It felt preordained and that was very disappointing.”

VTA spokeswoman Brandi Childress denied those claims and told San José Spotlight the agency held more than 20 meetings on Route 65 throughout the county between Jan. and Aug. 1 — including public input meetings, sessions of the Board of Directors and various VTA committee meetings.

“VTA staff presented the draft New Transit Service Plan numerous times,” Childress said, adding that advocates for the line almost always spoke out at those meetings. “At the end of the day, this was a policy decision made by the VTA Board of Directors who heard from advocates loud and clear and were fully aware that there were people who wanted the route to remain.”

Still, riders of all ages — from senior citizens to college students — say they rely on Route 65.

Fred Buzo, 51, who has been using public transit since he moved to San Jose 25 years ago, rides much more frequently after sending his son off to college with the car he used to drive.

“The things that VTA says are options are not really options,” Buzo said of the Route 61 route and 64b light-rail line that is supposed to replace Route 65 when the BART station opens.

Walking a half-mile in either direction to get to one of those options would be especially challenging for MacLeod.

Monica Mallon, a 22-year-old San Jose State student, spent her summer waking up early and riding the route both ways in an attempt to drive up the average boardings-per-hour past the benchmark used by the VTA. In July alone, Mallon says she made 150 trips on Route 65, relying on it to take her to her campus job.

“I completely rely on it to get around,” Mallon told San José Spotlight. “It changed my life in such a major way and I want future generations to have access to it, that’s the reason I’m willing to go to all these VTA board meetings and committee hearings.

“Seeing how much it would negatively impact people’s lives made me want to fight even harder,” Mallon continued. “I’ll have options, but a lot of people won’t.”

The Route 65 service will continue until the end of the year, according to VTA officials.