In the aftermath of 9/11, Silicon Valley’s airport became the first in the country to pioneer a therapy animal program to ease passengers’ fears and anxieties before boarding flights.

Now, 18 years later, the program is still going strong, and the animals are bringing joy to airport-goers of all ages.

Adam Albert, a volunteer since 2015, brought Johnny, his ten-and-a-half year old Standard Poodle, to meet passengers at the busy airport Friday morning. The energetic poodle’s arrival immediately attracted attention, even before the gray-haired dog made it through the security checkpoint.

“I got a dog that loves people,” Albert said. “This is what he likes to do, meet other people. It’s his favorite activity.” 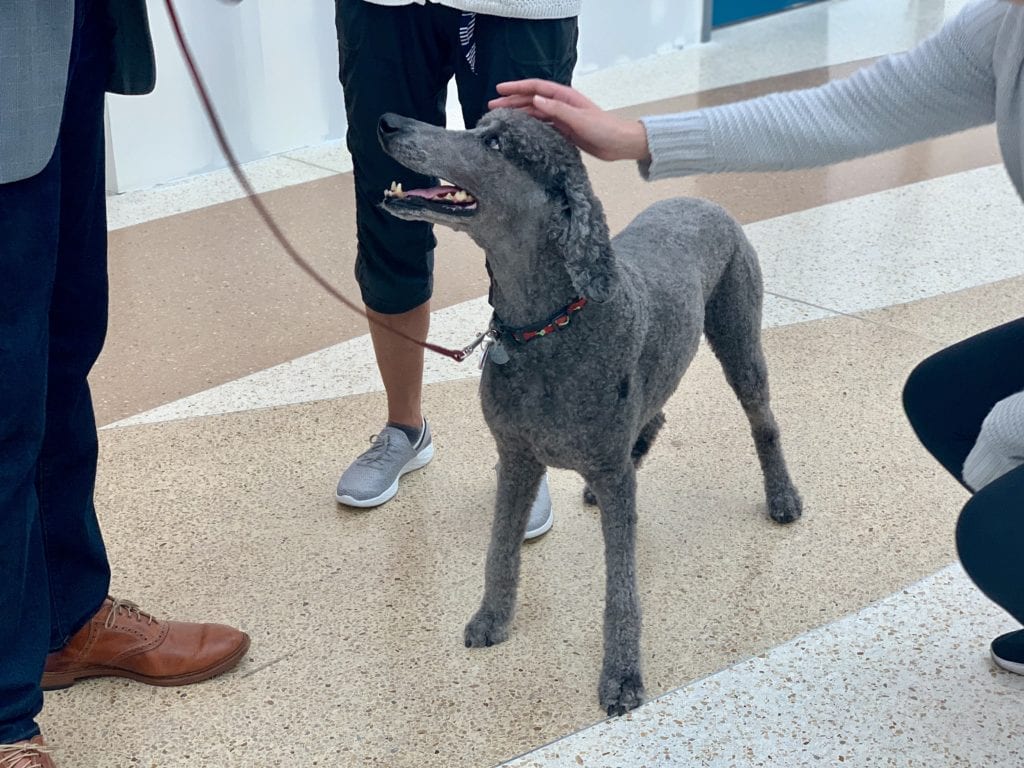 Johnny is one of 25 therapy dogs participating in the landmark program at the Mineta San Jose International Airport. Airport spokeswoman Rosemary Barnes said the program’s success has attracted the attention of numerous other airports worldwide, who call to ask for advice on how to create their own therapy animal programs.

“We’re so proud to see what they’ve done with it,” Barnes said. “What we just experienced upstairs for the past hour was just how our customers and how our employees respond to these beautiful animals. Ultimately, the surprise, the delight, the joy that people get (is the best part).”

Albert and Johnny volunteer at least three times a month, for one hour stretches or longer, depending on Johnny’s mood. The pair usually stroll through the terminals with Albert leading and pausing for passengers who are lured in by Johnny’s bright brown eyes.

“I look around: if they seem excited, then I’ll introduce myself and Johnny, ask if they’re interested in meeting him,” Albert explains. “If they say ‘yes,’ I release him and he goes to say hi.”

After three years of volunteering at hospice facilities, Albert decided to find a less stressful environment for Johnny and ultimately chose SJC’s therapy animal program. Animals who want to volunteer at the airport need to pass a certification testing, Albert said. 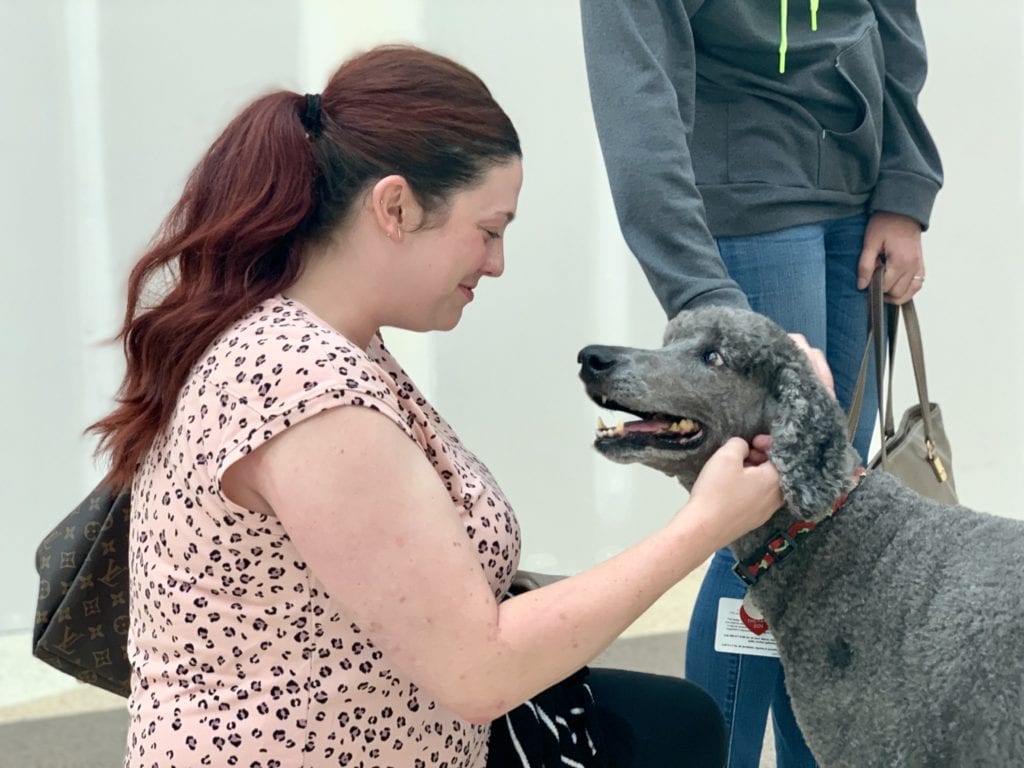 Cassidy Ziemke, a nurse at the Stanford Cancer Center, was traveling with her 3-year-old daughter, Helen Maner, who was feeling ‘antsy’ waiting for their Los Angeles flight and wanted to wander around and ‘go.’ But Helen took one glimpse at Johnny and immediately plopped down on the floor to pet him — she’s previously interacted with dogs at a nearby dog park — and it was love at first sight.

“She loves dogs. Up until Johnny came, she was all over the place. Now she’s happy, calm, and she hasn’t said, ‘Can we get on the airplane yet?’ in the past ten minutes,” Ziemke said. “I think dogs and cats bring such healing points to a lot of people. People would only benefit from the love.”

Kara Gniewek, who works for the Humane Society, says animals in airports are becoming more common as officials come to realize the therapeutic benefits that a furry friend can bring to anxious travelers, seniors, children and other vulnerable residents.

“I’ve seen (therapy animal programs) in different airports,” Gniewek said on Friday. “There’s a lot of people experiencing anxiety or homesickness… just to have a moment to focus on interacting with a critter like that is very helpful for a lot of people. I think that as long as it’s not stressful for the animals involved, there’s a lot of great interactions to be had.”

San Jose resident Trinh Nguyen had been restlessly waiting to board a flight to Maui with her husband and son Friday before being stopped by Johnny. The cat lover was delighted to hear that the program has introduced two cats to its current mix of dogs.

“I’ve heard about (the program), but I’ve never really seen the dogs until today — Johnny is my first one,” she said. “It’s great to see a pet walking around, making acquaintances… it’s really cute.”

Nguyen’s only feedback for airport officials?

After a hard battle, East San Jose wins a seat on the planning commission