BusinessSan JoseTechnology
by Ramona Giwargis
and Madelyn Reese
The headquarters of The Silicon Valley Organization is pictured in this file photo.

Silicon Valley’s powerful chamber of commerce announced its new CEO a week before its Board of Directors could vote to approve it—an apparent violation of its bylaws.

And now some of the group’s top leaders are questioning the hiring process and calling it flawed.

The Silicon Valley Organization, plagued by months of scandal over a racist image posted on its website, announced April 13 it had hired Derrick Seaver—a former SVO executive—to lead the organization. The decision came after former CEO Matt Mahood resigned abruptly in October, days after the campaign ad caused widespread fallout for the chamber.

But the organization’s Board of Directors has not yet voted on Seaver’s employment or its terms, a requirement outlined in its bylaws. The full board meets monthly, usually on the third Thursday of the month. Its next meeting is this Thursday, and Seaver’s appointment is not on the agenda. He’s listed as giving the CEO’s remarks.

According to the SVO’s bylaws, the “members of the Executive Committee shall employ the President and shall arrange the terms of employment, subject to the approval of the full Board of Directors.” The executive committee is a smaller subset of the Board of Directors, usually comprised of the board chair, vice chair and other officers.

The process raised alarm for Goodwill Silicon Valley CEO Mike Fox, Jr. from the start. Fox serves on the SVO’s Board of Directors and its executive committee. He was, however, not placed on another committee charged with recruiting and hiring Seaver—called the CEO selection committee.

Fox says SVO officials presented Seaver as the only option for CEO and gave the executive committee half an hour to discuss and vote on his appointment. Fox had to leave the meeting and couldn’t vote. He said members weren’t even told what the meeting was about.

“It was a 30-minute meeting. I didn’t know what the meeting was about,” Fox said. “I thought that was way too rushed. It didn’t give us time. They presented us one person and it was take it or leave it.”

Fox said it’s not surprising that the process may have violated the SVO’s bylaws. Though the bylaws allow the executive committee the powers of the full Board of Directors between meetings, it specifically states the employment of the CEO and president is subject to board approval.

“Even if (the bylaws) allow it, it’s poor governance. The full board has to decide on it,” Fox said. “When you announce it to the public, how do you backtrack from that? What if the board voted no? What do you do? Now that they’ve already announced it, the board will feel like they have to vote in favor of (Seaver).” 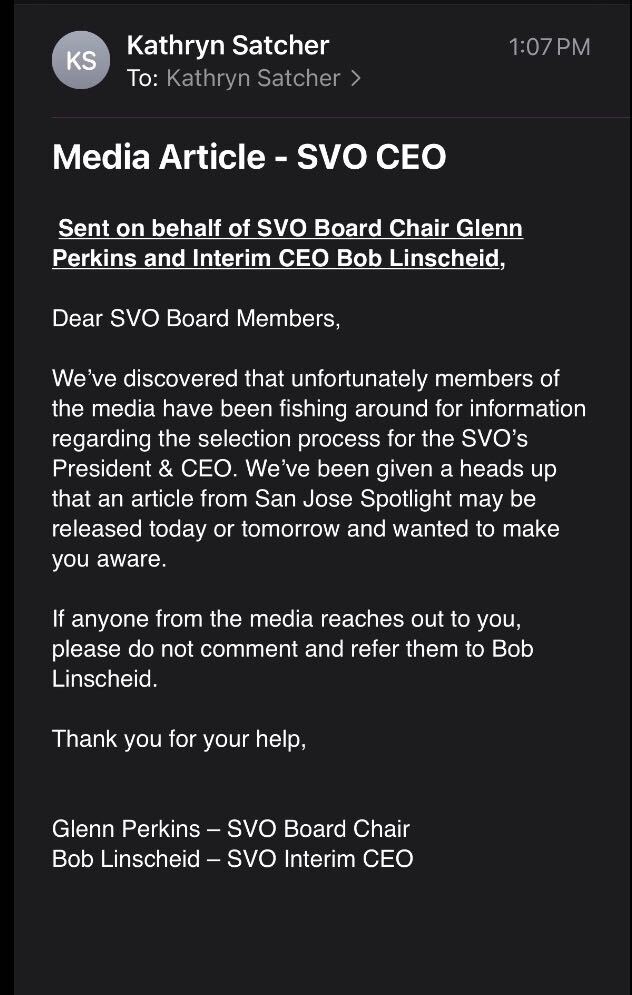 On Wednesday afternoon, SVO board members received an email from Linscheid and Perkins informing them not to speak to the media about Seaver’s hiring.

“If anyone from the media reaches out to you, please do not comment and refer them to Bob Linscheid,” the email stated.

Lobbying from the mayor?

One business leader, who asked to remain anonymous for fear of retribution, said Seaver was the favored choice of Mayor Sam Liccardo.

Liccardo, who was backed by the SVO in his City Council and mayoral campaigns, enjoyed a close relationship with Mahood, the former CEO. In fact, the mayor’s campaign consultant, Storefront Political Media, was hired by the chamber to run its campaigns and has been blamed for the racist ad.

Liccardo’s chief of staff, Jim Reed, also previously worked with Seaver at the SVO. Liccardo did not immediately respond to a request for comment.

Reed, however, said Liccardo did not lobby for Seaver.

“It’s because he needs someone he can control at SVO so he can raise money for Solutions San Jose,” the leader said, alluding to the mayor’s new advocacy organization which some say will replace the SVO’s now-dissolved PAC. “I think Sam felt that Derrick would be his best person in there.”

Reed said he did not try and influence the decision, either, but he thought Seaver was a great candidate.

“Whoever was going to be the next CEO of SVO was going to need exceptional communication, collaboration and bridge-building skills, and Derrick has those (in) abundance,” Reed said.

Seaver himself said that as a candidate for the position, he “respected the process fully throughout and trust its integrity.”

Seaver deferred additional questions to the organization’s board.

The organization has faced widespread scrutiny over racist campaign messaging. In early 2020, its political action committee darkened a Latina councilmember’s face. The most recent scandal involved an image of Black people in the streets surrounded by tear gas with a caption that said, “do you really want to sign on to this?” It intended to attack a political opponent’s stance on police reform.

SVO leaders launched a diversity panel and trainings. Yet two of its three finalists for the top job were white.

And one accomplished business leader and person of color says he was passed over.

Former Silicon Valley Black Chamber of Commerce CEO Joel Wyrick, who served in that position from 2003 to 2014, said an SVO board member recommended him for an interview for both the interim CEO position and the full-time job.

Wyrick said he never received an application or got a call for an interview.

“(The board member) thought I was a shoe-in for an interview,” Wyrick said. “He came back and said, ‘Joel, I don’t know what’s going on but I guess it just fell on deaf ears.’”

Wyrick also served as director of the Sunnyvale Downtown Association from 2007 to 2017, and has owned and operated his own real estate company, Wyrick Real Estate Group, since 2010.

“Had I not gotten the job, it’s okay and then it is what it is,” Wyrick said. “But I think I definitely deserved an interview.”

Wyrick said the only thing that might work against him is that he doesn’t have experience in a corporate job.

“I’ve never had a job before,” Wyrick said. “I’ve always owned the company.”

“There doesn’t seem to be much inclusion of small business (at SVO),” Wyrick said. “To me a chamber is probably more about small business than it is about corporate business, because the chamber acts as a mouthpiece for change on the local level and the state level.”