The towering buildings that dot San Jose’s skyline could soon take on a different shape – in large part to protect birds.

According to The Guardian, up to one billion birds die annually in the United States from running into illuminated skyscrapers or glass buildings akin to a Windex commercial. And San Jose councilors on Tuesday debated design changes to downtown buildings to ensure birds soaring through the Capital of Silicon Valley don’t run into the same problem.

“I think there’s a lot of folks who don’t know what’s going on,” he said.

Instead of adopting the changes outright, the council unanimously voted Tuesday to bring back guidelines related to the riparian corridor in two weeks. The design guide was adopted in 2004 and does not include rules related to the rehabilitation or modification of historic buildings.

The bird-friendly building design rules garnered the most attention and discussion from environmentalists Tuesday who submitted letters urging protections for local wildlife. San Jose initially created a set of rules to guide bird-friendly development in 2014.

On March 27, the Planning Commission recommended adding additional guidelines for bird-friendly development like:

City planning officials, however, deviated from some of the recommendations made by the commission. Instead, they asked the council to implement those changes only if the building is within 100 feet or a riparian corridor.

“A mandatory design element prohibiting all exterior building lighting throughout Downtown for eight months of the year due to bird migration would compromise public safety in Downtown parks and open spaces,” wrote Planning Director Rosalynn Hughey. “Additionally, a requirement for use of bird-safe glass throughout Downtown would increase the cost of development.”

Hughey estimated that bird-safe glass would add an additional $65 per square foot onto the cost of the building’s exteriors.

Councilmember Raul Peralez proposed that the bird-friendly design principles be mandatory in riparian areas – and be applicable within 300 feet, not the 100 feet proposed by staff.

“We have already seen current proposed projects, such as the Boston Properties’ Woz and Almaden project and Adobe Tower 4 project, take voluntary steps to incorporate bird safe features in their design,” Peralez wrote in his memo. “While we are fortunate that these two major projects along the riparian corridor have taken the initiative to promote conservation in their design, we may not be as fortunate in the future with other developments.”

City officials will return to council in two weeks after conducting additional outreach with developers and other downtown stakeholders.

From De Anza Boulevard to Allen Avenue, nearly 16 miles of San Jose’s worst roads will be resurfaced this year to the tune of $8.7 million.

San Jose councilors on Tuesday approved a contract with MCK Services Inc. for the second half of the city’s 30 mile major street resurfacing project. The council earlier this month approved a $10.9 million contract with DeSilva Gates Construction LP for the first 14 miles of major street. 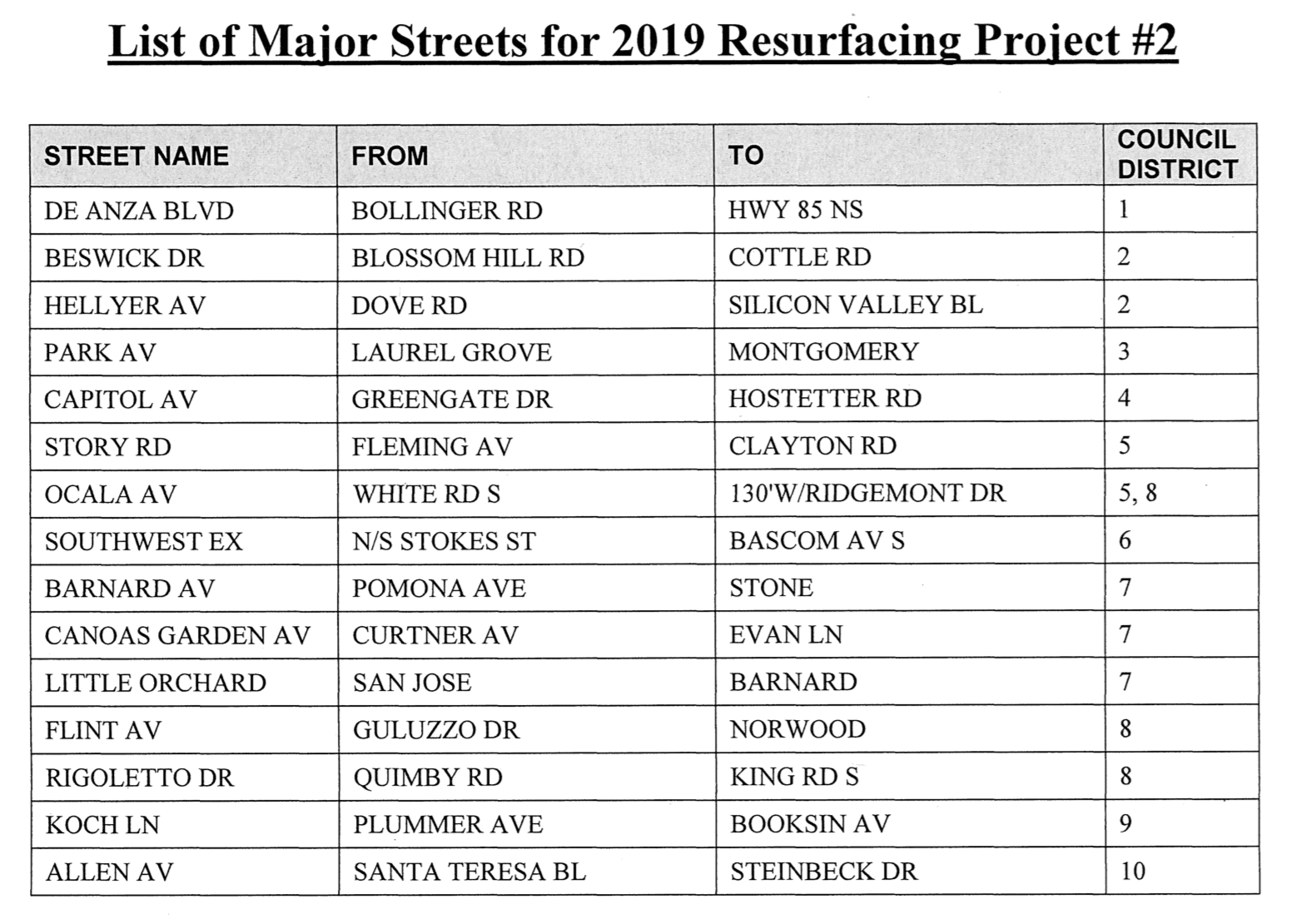 The two projects are part of a record-setting effort by the Department of Transportation to repair nearly 300 miles of city streets.

“This is ten times what we did six years ago and this is two-and-a-half times what we did last year,” department spokesperson Colin Heyne told San José Spotlight. “There’s a stall in getting money from Measure B, but we were ready to deliver. We’re in pretty good shape as far as being ready to handle these projects.”

The city is focusing on repairing 30 miles of the worst – and most popular – streets in San Jose.

Heyne said that one to three inches of these roads must be dug up and replaced, which is much more costly than the alternative of resealing streets with a thin layer.

“We try to prevent letting streets get to the condition where they need to be resurfaced,” he said. 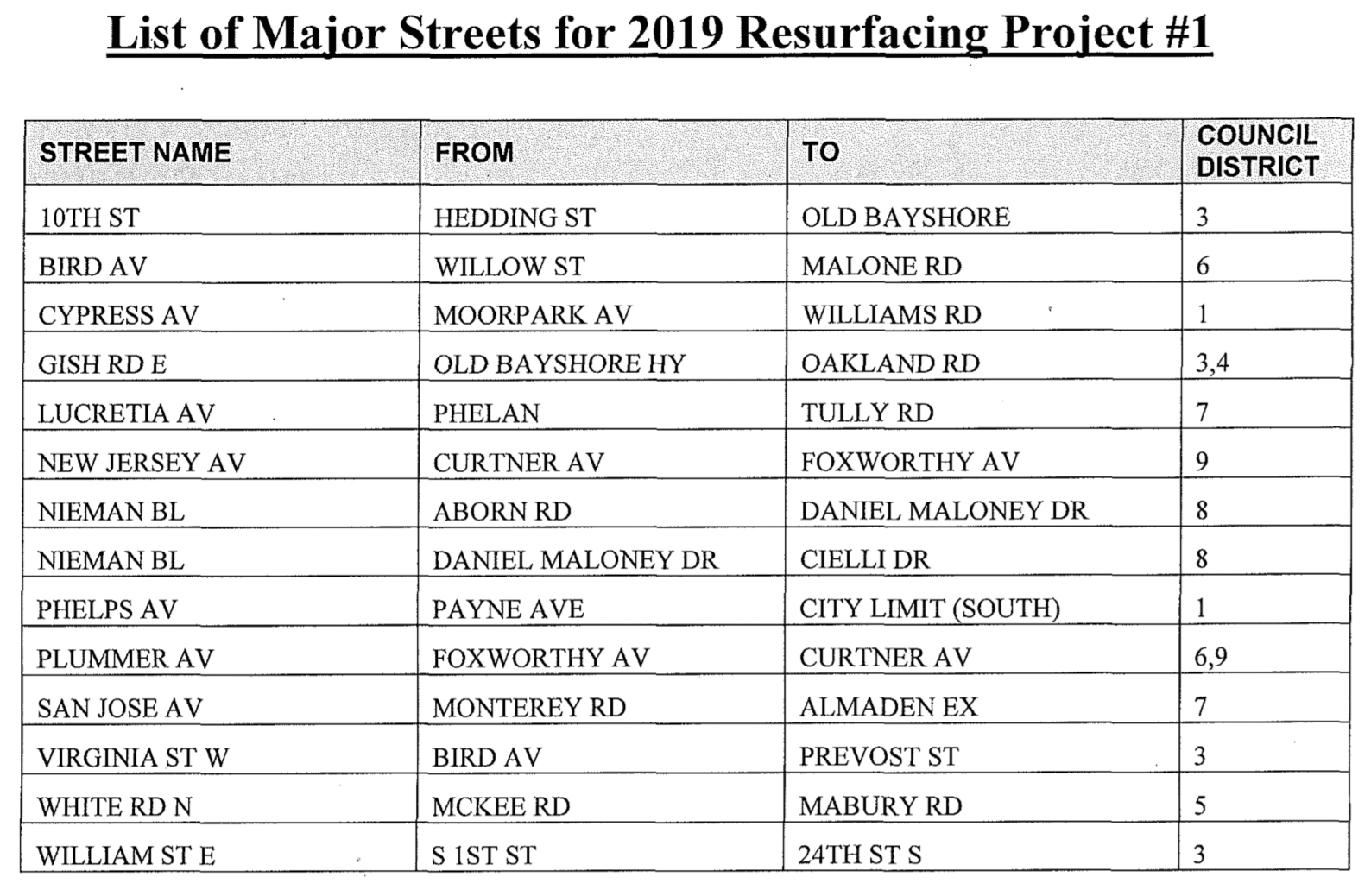 The city also has plans to reseal 56 miles of roads in the major street network and install missing curb ramps to make sidewalks ADA-compliant.

Monica Mallon, a San Jose resident and public transit advocate, said she’s noticed that many of the streets in the city are in “desperate need of repair.”

“I’m not sure what streets are being repaved, but I’m happy with the direction the city is going in with this,” she added.” Making streets safer and more pedestrian and bike-friendly is one of the best things we can do to encourage people to use more sustainable forms of transportation.”

According to memos from Transportation Director John Ristow, the projects will utilize funding from the pavement maintenance program, bicycle and pedestrian facilities, the SB1 Road Repair and Accountability Act of 2017 and the 2016 VTA Measure B.