San Jose Councilmember Matt Mahan is raking Santa Clara County officials over the coals for what he alleges is a gross misuse of public funds to give county workers hazard pay for working through the COVID-19 pandemic.

On Wednesday, Mahan publicly criticized the Board of Supervisors in an op-ed and on Twitter for approving $76 million in bonuses for the county’s 22,000 workers. Earlier this month, the board approved granting each worker a one-time payment of $2,500 in hazard pay. The bonuses won’t go into effect until Dec. 3, and the county still has to meet and confer with the unions regarding how payments will be disbursed. 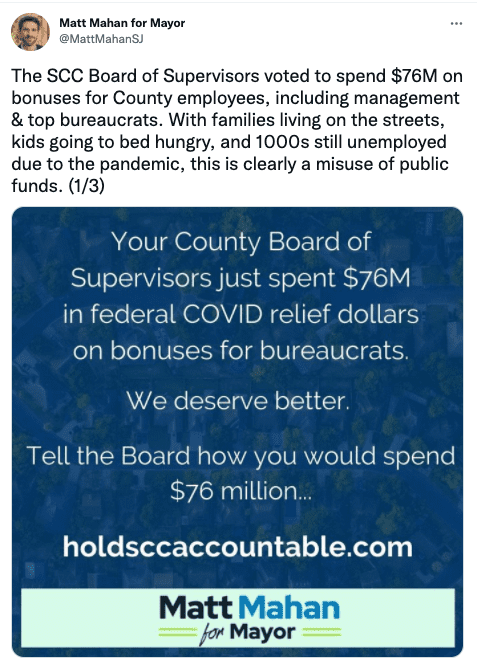 Mahan said the monies, which came from the federal American Rescue Plan, were never intended to be used to reward government employees, and that they should have been diverted to people experiencing hardships in the community. Mahan said hazard pay is appropriate for frontline workers, such as doctors and nurses.

“We’re working to recover from one of the worst crises our community has faced in living memory,” Mahan told San José Spotlight. “To have local government decide that it makes more sense to give our employees—many of whom are very well paid or working from home—bonuses, rather than spend federal funds on the dire needs in the community, reflects poorly on all of us.”

Mahan also launched an interactive website that lets residents see how the money could have been spent on food, roads, modular apartments, parks, eliminating rent debt and ending the digital divide for students. The website is paid for by Neighbors for Matt Mahan for Mayor 2022.

Hazard pay is coming to San Jose for grocery workers

Mahan, who recently announced his mayoral ambitions, said he has concerns about the county’s management of public funds, noting that 4,500 county employees make more than $200,000 per year in salary and benefits. In an op-ed he published in the Mercury News, Mahan points to several instances of alleged waste, including the 2019 decision to allocate $5 million for statues celebrating women.

Supervisor Cindy Chavez led the effort to create the statues. Chavez, who was unavailable for comment, recently announced her run for San Jose mayor, with current Mayor Sam Liccardo being termed out. Asked if he was taking a jab at a competitor, Mahan said he wasn’t interested in commenting “on the horse race.”

“I want to make sure that the county, just like the city, are spending tax dollars well and building public trust,” Mahan said.

Supervisor Susan Ellenberg declined to comment on Mahan’s critiques. A representative for Supervisor Otto Lee said he was out of the country and unavailable. Supervisors Mike Wasserman and Joe Simitian did not respond to requests for comment.

Mahan said he approves of giving bonuses to frontline employees, such as public health workers, but not people who telecommuted during the pandemic. Hundreds of county workers contracted COVID-19 after agencies ordered them to return to offices over the summer. Employees in different departments who previously spoke with San José Spotlight expressed fear about returning to work as the highly infectious Delta variant surged across Santa Clara County.

Earlier this year, Mahan voted against a proposal to give hazard pay to grocery workers in San Jose an extra $3 per hour. Mahan said he wasn’t against hazard pay, but wanted that decision made by private companies, adding that it could harm small businesses and customers in the form of higher food prices. He said he was in favor of limiting the city’s mandate to large, publicly traded grocery stores. The City Council approved the hazard pay ordinance, and Mahan, Liccardo and Councilmember Dev Davis voted against it.

“From testing, contract tracing and mass vaccination site support to relocating to assist other departments, we never skipped a beat,” Diaz said. “County workers deserve this pay and more for their sacrifice and continued contributions to the recovery.”

Allan Kamara, clinical nurse and president of the Registered Nurses Professional Association, told San José Spotlight he appreciates Mahan’s advocacy for nurses and frontline workers. He said nurses bore the brunt of COVID-19 during the pandemic and deserve to be supported with hazard pay.

“All we can say is, $2,500, as much as it sounds big to people, that is not enough to replace what we’ve gone through during the pandemic,” Kamara said. “We support everyone who supported this. Everyone deserves it, and everybody should get every dime of it.”