Business
by Ramona Giwargis
Casino M8trix is pictured in this file photo.

San Jose’s longstanding war with its cardrooms has turned into… love?

As state gaming regulators mulled a controversial proposal to ban Blackjack in California cardrooms, San Jose officials loudly stood up for Casino M8trix and Bay 101 by opposing the change and sending a top city leader to Antioch to speak out against the plan.

Bena Chang, San Jose’s director of intergovernmental relations, told state officials that Bay 101 and Casino M8trix “provide a significant source of both jobs and revenue for the city of San Jose.”

“In San Jose, these revenues go to pay for basic community services like police and fire, libraries and our community centers,” Chang said during the Dec. 11 meeting of the Bureau of Gambling Control. “These cardrooms are a critical part of our community and we ask that you consider these impacts as you make any decisions.”

“In our city’s two cardrooms, Casino M8trix and Bay 101, Blackjack alone contributes nearly $4 million to the city’s General Fund and over 250 jobs, in addition to the $25 million in revenue to the two cardrooms,” Wilcox wrote.

California regulators are considering rescinding approvals for Blackjack-type games at all of the Golden State’s 74 cardrooms following pressure from American Indian tribes who claim exclusivity over those games. The Bureau of Gambling Control held seven public hearings on the proposed ban, which created an uproar in cardrooms across the state.

The $75,000 contribution is believed to be the largest from San Jose gaming to a political campaign. M8trix owners Pete and Jeanine Lunardi declined comment through their attorney, Robert Lindo.

It’s a far cry from a few years ago when Liccardo balked at relaxing cardroom regulations, demanded political action committees return cash from the card clubs and city officials halted Casino M8trix’s plans to allow gaming on its top floor, leading to a lawsuit.

“We have an obligation to maintain regulatory protections for community’s safety and well-being,” Liccardo, a councilman and mayoral candidate, wrote in a April 2014 memo opposing looser regulations on cardrooms.

Liccardo also called on business and labor groups to return $25,000 from Casino M8trix and Bay 101. The cardrooms cannot donate to political candidates, but can support initiatives. The mayor has not criticized the $75,000 from Casino M8trix to support last fall’s ballot measures. Liccado spokesman David Low said the M8trix was one of 100 businesses to donate to the measures.

Gaming, much like cannabis, became a hot-button moral issue toxic to politicians eyeing higher office. But just like weed, it’s a cash cow for City Hall. The city raked in nearly $18 million from its cardrooms in 2017.

“I think the communication with the clubs and the city has become better,” Brian Bumb, owner of Bay 101, said in an interview. “The city is always looking for new ways to generate revenue, it probably helps the dialogue some.”

And that could explain why San Jose now embraces its cardrooms, said a top casino consultant.

“2018 is the year that San Jose made up with its casinos,” said Eric Stroker, who represents Casino M8trix. “The efforts that were made by a few key individuals really made some big changes and it would be nice to see it maintained moving forward.”

In another sign of new-found cooperation, Liccardo and the City Council in August tabled a ballot measure to increase the 15 percent business tax on cardrooms, though the measure will likely be revived in 2020. Low said the mayor is “very interested in exploring” a measure to raise or extend card room taxes. 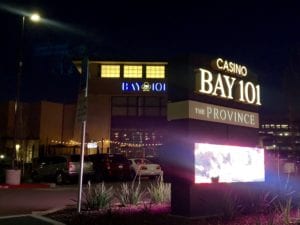 “I would hope they would do that since the city gets 15 percent of the revenue we generate from that game,” Werner said.

Despite that support, Werner said, there’s another battle brewing with City Hall: Expansion. Werner wants to add more tables, but in San Jose, voters must approve the expansion.

“Any business needs to expand in order to survive,” he said. “The city of San Jose has been opposed to expansion of the cardrooms and that’s still a contention.”

So, it’s not a perfect relationship, but it’s getting better — San Jose rebuking the Blackjack ban, shelving a business tax hike and then receiving $75,000 for citywide ballot measures.

But, then again, it could all just be the game of politics.

“Providing a meaningful contribution on issues of importance to the mayor and council can work to build or maintain good relations,” said Garrick Percival, a San Jose State University political science professor. “Cultivating these relationships can be helpful if the casino has any pending or future issues that will cross the desks of council members.”