With corporate giants like Monsanto lining up to invest in cannabis, some San Jose lawmakers are trying to make room in the industry for residents who fell victim to the war on drugs.

Next week, councilors will decide whether to move forward with a cannabis equity program, previously proposed by Councilmembers Magdalena Carrasco and Raul Peralez. The concept is based on a state law signed last year by former Gov. Jerry Brown that aims to reduce barriers for getting into the industry for minorities, the economically disadvantaged and previously incarcerated individuals.

San Jose is home to 16 city-sanctioned medical and recreational marijuana shops. But only two had minority owners – Ernie Arreola, the former Latino CEO of LUX and Brando Duong, a Vietnamese man who owns Natural Herbal Pain Relief with his father. 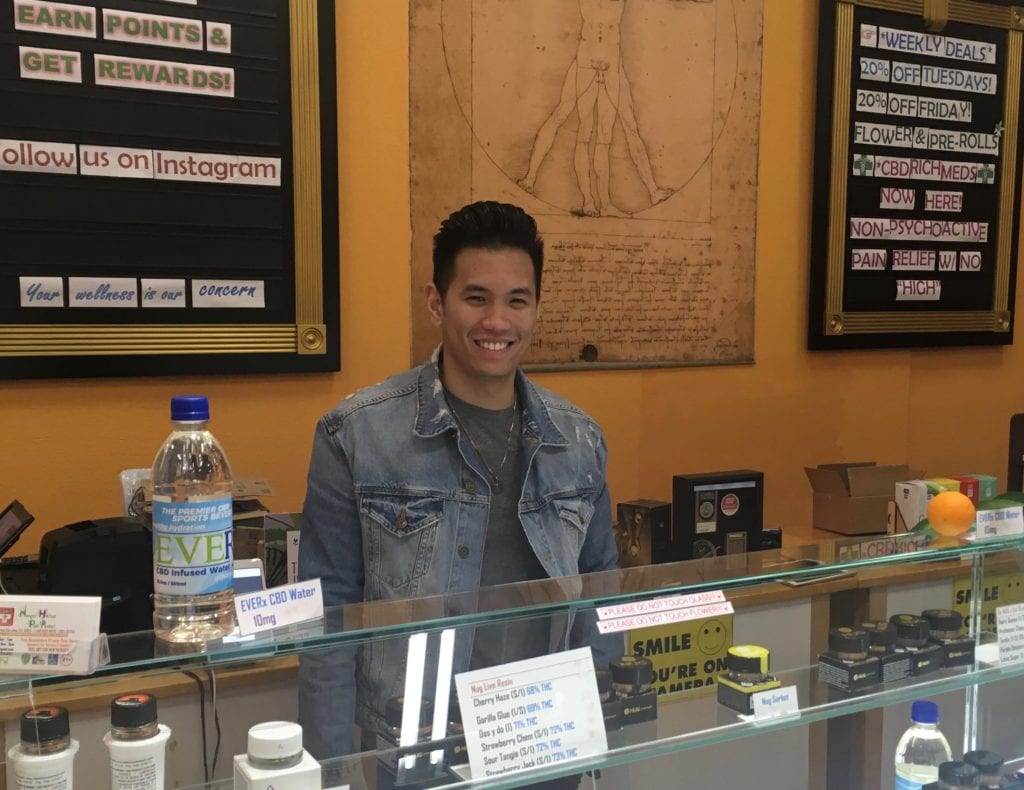 In an interview at his San Jose shop on Thursday, Duong said he understands the stigma related to cannabis in minority communities.

“In minority communities, especially the Asian community, this is still seen as something that is not too welcomed,” Duong said of his Vietnamese ethnicity.

He said his family has accepted it, but he still gets raised eyebrows from those in his community.

‘”Are you legitimate?’ is always the first thing they ask,” Duong said. “Asian people just haven’t come around to it, to them it’s still a drug.”

A lawmaker’s shift in perspective

As a former social worker, Carrasco said she witnessed families fall apart largely due to drugs and alcohol. With cannabis becoming legalized in 2017, she wonders how many families would still be together had the change happened sooner. For Carrasco, this program is a way to right those wrongs.

“I just think of how many children were unable to have the benefit that we will now be able to give families in terms of restoring their lives or at least being able to benefit from an industry that’s growing very rapidly,” she said.

Those who are now squeezed out and marginalized by the new booming legal industry “tend to be working poor and working class folks and folks of color, specifically African-American and Latino populations,” Armaline said.

Removing the stigma from criminal records

Daniel Montero has been pushing for a proposal like the one from Carrasco and Peralez.

As the chair of the Cannabis Equity Working Group and a 20-year veteran of the cannabis business, Montero said he can’t afford to enter the regulated industry without an equity program in place.

“It creates a traversable bridge that we can cross without falling to our demise like a bad Indiana Jones movie,” he said.

Montero has two now-expunged cannabis convictions. He believes he would’ve previously been “shunned” by the Police Department for wanting to work at a dispensary because of his record.

But Montero acknowledges that this is part of a larger education process.

“We want to remove the prejudice and remove the stigma for people like me who were criminalized for an activity that is now legal,” he said. “We want that to be reflected in the application process to own a dispensary or delivery service or even to just want to work within the cannabis industry.”

Montero said he’ll apply to open a cannabis shop if the city moved forward with an equity program.

But even if the City Council decides to prioritize an equity program next week, Carrasco said she’s still concerned that the registry for dispensaries is closed. San Jose became one of the first major cities to regulate marijuana. The city went through a rigorous process to vet the current 16 cannabis shops, closing down nearly one hundred illegal ones.

Now it’s unclear if San Jose – which is home to more than a million residents – will issue licenses for new pot shops.

“If we don’t re-open the registration for dispensaries, then the equity program doesn’t really have any teeth,” Carrasco said. “I know that it opens it up for manufacturing, lab testing and distribution, but it doesn’t open it up for dispensaries.”

Councilmember Pam Foley is also requesting that the council reevaluates allowing more than 16 businesses in the city. She submitted a proposal to be considered at next week’s City Council priority-setting session, which allows lawmakers to rank the city’s top policy priorities for the year ahead.

“This minimizes San Jose’s revenue potential, creates an over-saturation of cannabis businesses in small pockets of the city and therefore an inequitable distribution throughout the entire city,” she wrote in her proposal.

The price of growth: Alum Rock businesses at risk of displacement