San Jose
by Nadia Lopez
Homes being built in San Jose are pictured in this file photo.

San Jose lawmakers on Tuesday are expected to approve drafting an affordable housing tax measure for the March 2020 ballot, but differ on how to divvy up the funds that the tax will generate — a frequent dilemma among a City Council that is often at odds with one another.

In a memo to their colleagues, Mayor Sam Liccardo and Councilmembers Lan Diep and Raul Peralez are advocating to allocate half the funds for housing that prioritizes extremely-low income households. They want to allocate another 40 percent of the funds for affordable rental housing and 10 percent for below market-rate for-sale housing and moderate-income rentals.

They propose dedicating 10 percent for homeless prevention and 5 percent for city administrative costs.

“This general levy is a necessary but not sufficient means to boost city resources to combat this crisis, and we will return to council to discuss a commercial linkage fee and other options in the weeks and months ahead,” they wrote.

The mayor and his co-signers also propose strong accountability and transparency measures, including requiring a 60-day notice and a two-thirds council vote before lawmakers shift funding, and creating a citizens oversight committee.

“While we recognize that the proposed tax measure is to raise funds for general purposes of the city, the housing crisis affects many and, we know that it disproportionately affects those in the extremely low income bracket,” wrote Councilmembers Sylvia Arenas, Magdalena Carrasco and Maya Esparza in a joint memo. “That is precisely why we recommend that a significant amount of the revenue generated from this measure be directed to those with the highest need.”

Councilmember Johnny Khamis is expected to release a memo Monday opposing the tax altogether, saying residents here are already overtaxed and the measure punishes those looking to sell their homes and leave the Bay Area.

In a poll conducted last week, more than 60 percent of San Jose voters supported the potential real property transfer tax, which would apply to the sale of properties valued at $2 million or more. The survey, which polled 806 registered voters likely to vote in the March 2020 primary, found a majority of likely San Jose voters support the tax to generate funds for affordable housing. 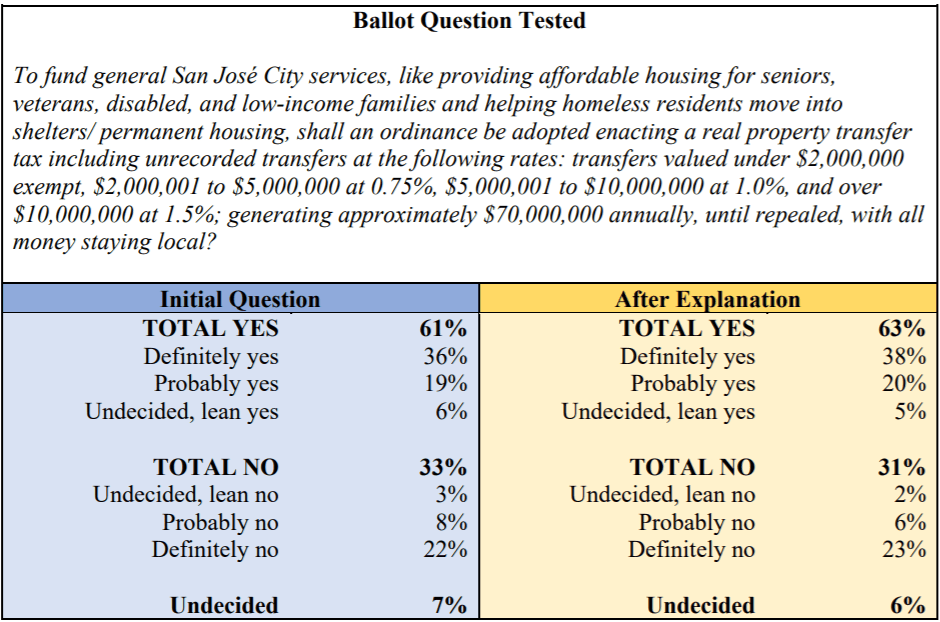 “Given the serious needs San Jose faces, with a variety of issues, including homelessness and the lack of affordable housing, emergency response, the administration recommends that the council take the next step in considering placing this potential measure on the ballot,” said Lee Wilcox, the chief of staff to the city manager, in a memo last week.

City officials estimate that only 5 percent of all single-family homes, condominiums and townhomes in San Jose will be affected, primarily the sale of commercial and industrial buildings.

The potential tax only needs a simple majority to pass. San Jose would join many other Bay Area cities in implementing such a tax, including San Francisco, which passed its tiered transfer tax in 2016.

If passed by voters, the tax increase would raise about $70 million each year, according to city officials.

Once approved Tuesday, city officials will return to the council by Dec. 3 with a ballot language draft. The deadline for the city to submit a draft to the Santa Clara County Registrar of Voters is Dec. 6.

Also on Tuesday, local leaders will hear an update on the city’s ambitious environmental plan to address climate change by reducing at least 40 percent of San Jose’s greenhouse gas emissions to 1990 levels by 2020.

“The climate challenges of this century directly affect the quality of life of all residents in San Jose,” wrote Kerrie Romanow, director of the city’s environmental services department. “Over the past two years, across California, the United States, and worldwide, there have been more frequent and disruptive flooding events, degraded air quality from massive wildfires and record-breaking extreme heat events. San Jose has been no stranger to such occurrences.”

City leaders launched a community choice energy program, which allows residents to choose a renewable, carbon-free energy source to power their homes and businesses. Now, officials want to expand the plan by including a “zero-waste” initiative, which will assess the city’s zero waste strategies and determine how many emissions are coming from solid waste.

The plan also includes a wide set of environmentally friendly reforms the city hopes to achieve, which include prohibiting natural gas in new construction projects citywide by Jan. 2023 and partnering with San Jose Clean Energy to provide 100 percent carbon-free energy to residents within the next two years.