San Jose-based Bloom Energy, whose Vice President Carl Guardino is a personal friend to Mayor Sam Liccardo, worked directly with the mayor’s office to shape and write a controversial exemption to the city’s 2020 landmark ban on natural gas for new commercial buildings, an investigation by San José Spotlight has found. Bloom Energy qualified for the exemption Guardino’s company helped write.

The level of access that Liccardo and the city granted Bloom Energy and how the exemption in the city’s gas ban was shaped is troubling, said John Sims, professor emeritus at McGeorge School of Law at the University of the Pacific in Sacramento.

“This is a lobbyist’s dream—to write up something at the last minute, hand it to the City Council, and have them say, ‘Oh, yeah, that looks OK,’ then pass it that day or the next day,” Sims told San José Spotlight.

The real question, Sims added, is whether San Jose critically analyzed the proposal pushed by Bloom Energy—an energy company with special interests—before voting on it.

“It is very important for the public to know about this because it appears to show that there’s not really any deliberation or analysis of the issues going on inside the City Council,” he said. “It exposes the shallowness of the City Council’s deliberations.”

Environmental advocacy groups, who fought hard against exempting gas-powered fuel cells—like those sold by Bloom Energy—from the natural gas ban, say they’re dismayed to learn about the company’s role in writing the policy.

“This exemption was added super last minute just because one company requested it, and it did not go through all of the vetting process,” Linda Hutchins-Knowles, co-founder and volunteer with the Silicon Valley chapter of the climate justice group Mothers Out Front that rallied against the exemption, told San José Spotlight. “One thing that troubles me is the level of influence that Bloom (Energy) had over this.”

It’s not uncommon for public officials and lobbyists to work together on policies, political experts and ethicists said, but the way the exemption lobbied by Bloom Energy was added—without much public scrutiny—is raising questions and concerns about the city’s inner workings.

Last year, San José Spotlight investigated Bloom Energy’s robust lobbying campaign, which heavily involved Guardino and included a slew of emails, phone calls and meetings with city officials in the days before the vote. The company ultimately won the controversial exemption amid the city’s plan for an all-electric future.

The newly-surfaced emails between Guardino and Liccardo further shed light on how much influence—and direct say—the energy company had over a public policy process.

And those emails were shielded from the public for more than a year.

Without explanation, San Jose failed to disclose the emails in response to San José Spotlight’s public records request for city officials’ communications with Bloom Energy in December 2020. The mayor’s office this week admitted the emails should have been released in 2020.

“This was an administrative overstep on our part and we are taking steps to make sure it doesn’t happen again,” said Liccardo’s spokesperson Rachel Davis.

“The mayor publicly urged city staff to work with Bloom and other providers of off-grid power sources in fashioning this ordinance, because many of our labs, dialysis centers, data centers, and hospitals critically need electricity that is more reliable than PG&E can provide,” Davis told San José Spotlight. “Our job is to find solutions that work, and that requires working with stakeholders to understand their perspectives and to incorporate them where aligned with our city’s goals.”

“We regularly exchange with local, state, national and international policy makers and elected officials to provide our expertise on energy resiliency and debcarbonization strategies,” Duffourg said.

Bloom Energy is a publicly traded company on the New York Stock Exchange.

In November 2020, San Jose was wrapping up its three-year-long study process to move new city construction projects toward clean electricity—and away from natural gas. The initial proposal, which did not include an exemption for self-generating power sources such as Bloom Energy’s fuel cells, was praised by environmental activists and advocates as an important step to address the climate crisis.

The proposal was crafted with feedback from more than 200 individuals from roughly 65 organizations, city officials told San José Spotlight previously.

But Guardino and Bloom Energy’s two external lobbyists, Jim Cunneen and Pete Carrillo, claimed the company was unaware of the city’s plan and started calling councilmembers and officials in mid-November to push the exemption for self-generating power sources. Days later, San Jose abruptly carved out an exemption that would benefit the company until at least 2025—without the same level of public outreach or research it did for the rest of the proposal.

Guardino also started sending suggested language to be added, emails show, that was crafted by his company.

“Please find below our suggested language which we believe is good for the city, (its) resiliency, our environment and economy,” Guardino wrote in a Nov. 16 email to Liccardo, his chief of staff Jim Reed and senior advisor Scott Green.

Later that day, the city published an updated proposed exemption—one day before the vote on the gas ban was initially scheduled— with new language almost identical to what Guardino suggested. The council opted to postpone the November vote following a swift and fierce backlash from environmental advocates over the new exemption.

City officials with the Environmental Services Department previously told San José Spotlight they reviewed the language sent by Bloom Energy, but declined to say whether the city used it.

Emails also show Liccardo and Guardino’s team were still hammering out the final language for the exemption the morning of the vote. Liccardo started an email thread to Guardino, with a subject line that reads “My revision,” around 11 a.m. that day, to which Guardino responded that Bloom Energy will get back to the city in an hour.

“I have just forwarded your language below to our General Counsel and our technical team to seek their insights as to whether it meets the resiliency goals that your City and Bloom Energy share,” Guardino wrote.

More than two hours later, Guardino responded with more revisions. The suggested language was added verbatim into the city’s law that the City Council passed in late 2020. 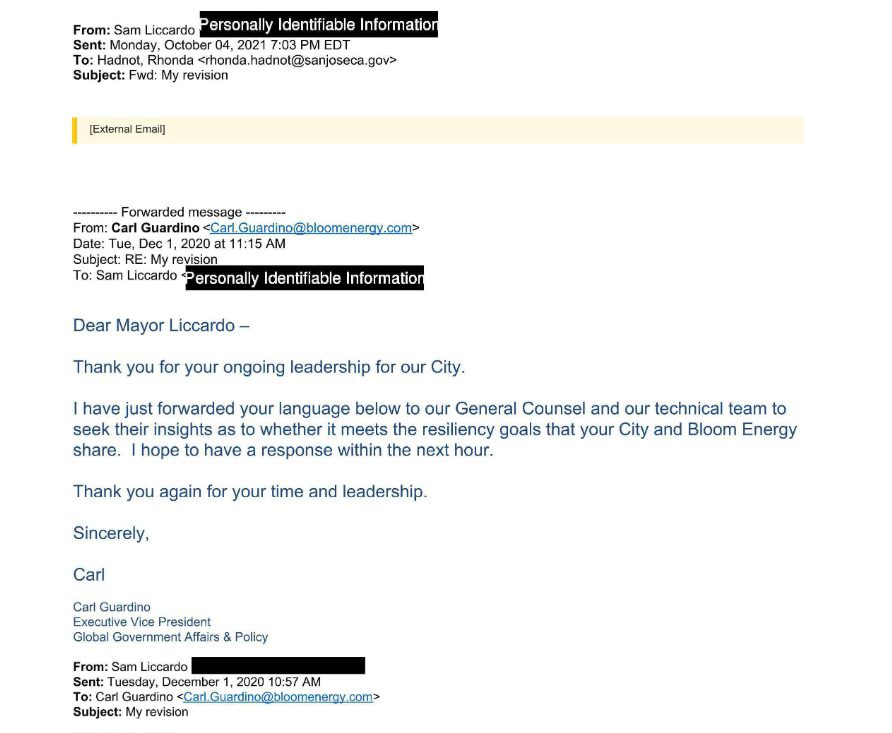 Sean McMorris, a policy consultant to watchdog group California Common Cause, said what happened in San Jose is unfortunately how the government works sometimes.

“It’s not uncommon for lobbyists to actually craft laws or introduce them to politicians,” McMorris told San José Spotlight. “It’s not illegal behavior, but transparency is very important so that the public can adequately scrutinize it.”

Environmental advocates maintained the exemption is counterproductive to San Jose’s goal of a clean future.

The exemption allows gas-powered fuel cells, such as Bloom Energy’s, to be installed in new construction in San Jose, even though this requires installing gas lines—which the ordinance otherwise prohibits.

The fuel cells run nonstop on gas, comprised primarily of climate-destabilizing methane, and produce approximately three times as many greenhouse gas emissions than those produced by the mostly renewable electricity from PG&E and the occasional use of a diesel backup generator during power outages, advocates said.

“From a climate standpoint, this was a terrible idea,” said Hutchins-Knowles of Mothers Out Front. “And from a good governance standpoint, it was a very bad process. My concern is with the rushed nature and the fact that it wasn’t publicly acknowledged that this was really for Bloom.”

More than 30 enviromental organizations cosigned a letter in November 2020 urging the city to reject the exemption.

“We did engage in a dialogue, but it did seem like a done deal,” Diane Bailey, executive director of local environmental group Menlo Spark, told San José Spotlight. “That was frustrating, because the exemption really runs counter to the city’s climate goals. San Jose has taken on a leadership role on phasing out fossil fuel, and I salute them for that, but this exemption was an aberration.”