Garcia addressed some of those concerns Thursday in an hour-long webinar, moderated by the Silicon Valley Organization’s President and CEO Matt Mahood and incoming board chair, Rick Beatty.

“This Police Department has operated the exact same way with keeping our community safe and taking the criminal element off of the street as we did before COVID-19. I’m very proud of that,” said Garcia, who is in his fifth year as chief. “This is why we raised our right hands – to be here in these times of crisis.”

Garcia started tracking weekly crime rates when the region’s shelter in place order was issued mid-March to compare statistics from the same time period in 2019, focusing on “Priority One” crimes like homicide, rape, domestic violence and robbery. The data helps re-direct the department’s 1,151 officers’ efforts through the coronavirus crisis.

Compared to 2019, violent crime decreased 22 percent and property crime went down 28 percent March 15 through April 18, police data show. But while overall burglary is down almost 10 percent and residential burglary is down 30 percent, there’s been an uptick in school burglaries, Garcia said

Those statistics do not reflect vandalism, including the recent broken doors and windows of local restaurants in Berryessa. Garcia said officers have not yet found evidence that incidents involving Asian businesses are hate crimes. 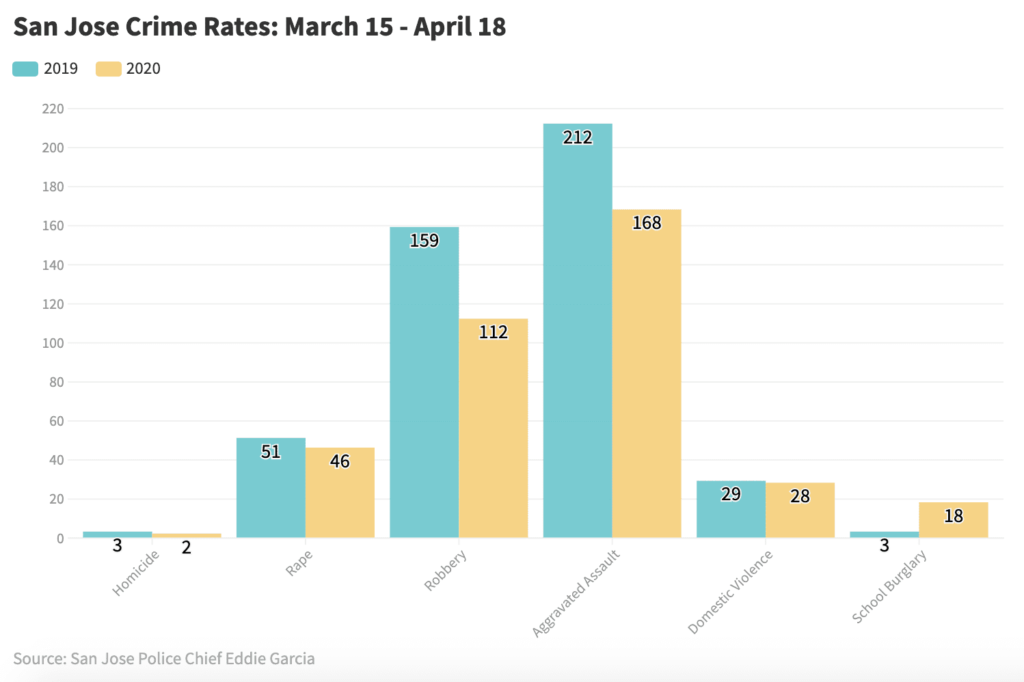 Despite the slump in crime, Garcia said the numbers would be much higher if police staff or hours were cut in response to the virus. He also does not expect these crime rates to continue when the shelter in place order is lifted.

Most rates have decreased compared to 2019, an analysis of crimes between March 17 and April 20 showed. Domestic violence, however, nearly doubled from 13 to 28 calls. 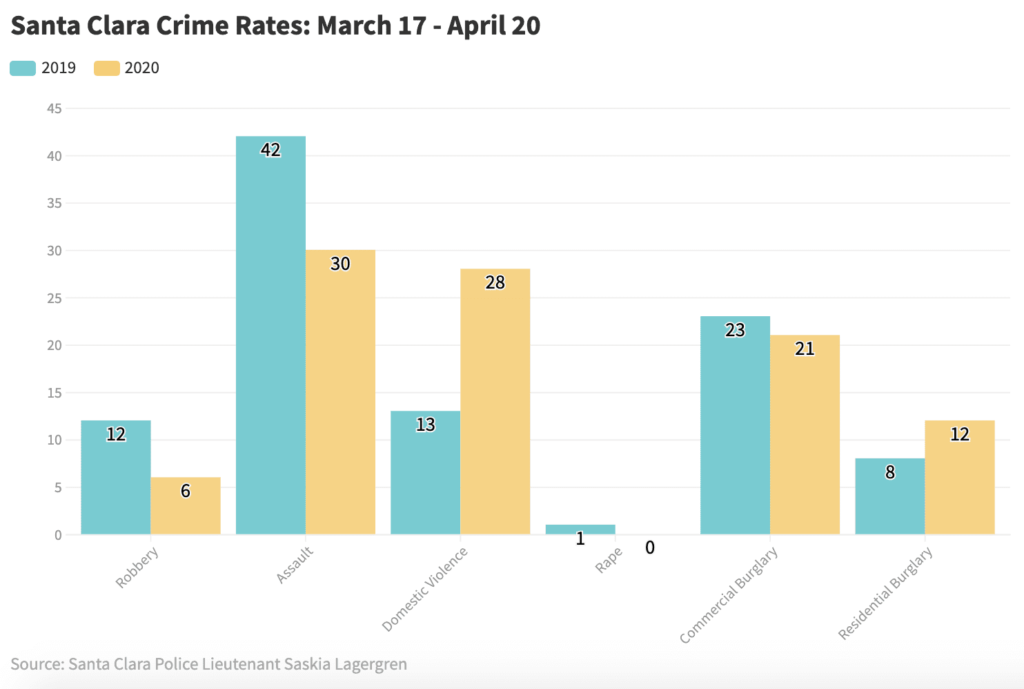 Cases of theft and larceny have dramatically decreased, too, from 409 last year to 163, as more businesses stay closed and residents are home to successfully receive packages. But residential burglary rates increased by four this year, despite beefed up patrols throughout the day, according to Santa Clara Police Department Lieutenant Saskia Lagergren.

“Obviously, they’re still out there; burglars are still out there burglarizing, and that could be when people are home,” Lagergren said. “We don’t want anyone else to be burglarized, but it’s obviously a lot worse if the residents are home at the time.”

She said the department hasn’t seen much change, staying fully staffed with 148 sworn officers, and growing. The main difference operationally is trying to limit contact with the public.

“There’s always some threat facing us as police officers, whether it’s a virus or whether it’s an armed assailant,” Lagergren said. “Pretty much everyone does this job because they want to help people in times of crisis. What we’re trying to do now is just continue to do our job.”

The safest time for businesses is when they’re open. As thousands of nonessential storefronts have shuttered and many open businesses have reduced hours, Garcia said surveillance cameras are one of the most helpful tools business owners can use to protect their properties. He also suggested owners install lighting and swing by periodically to check in.

Officers in San Jose and Santa Clara can assist with light and camera installation if residents reach out to the departments’ community services or crime prevention units.

The department has also reassigned schedules to meet changing needs. For example, officers who once patrolled open bars now check in on closed businesses. When issues arise, officers typically respond within eight minutes, Garcia said. In recent weeks, officers have arrested more than 20 intruders, many linked to multiple burglaries.

Crime rates have historically gone up when unemployment increases, but Garcia isn’t concerned, pointing to the department’s early successes. He recognized, however, that unemployment partnered with anxiety around the pandemic can contribute to family stress, which sometimes leads to abuse.

Even so, organizations like the YWCA and NextDoor Solutions have reported fewer hotline calls in recent weeks, possibly because domestic abuse victims are often sheltering alongside their abuser without a safe time or place to reach out for help.

Garcia can’t account for the rise in domestic violence across the county but he noted it’s often an underreported crime.

“This is a crime that’s obviously very difficult to wrap our arms around, and it’s a crime that we need to continually keep our finger on and continually message out,” Garcia said. “We’re going to do everything in our power, even though you’re sheltering in place to keep them safe if they’re victimized.”