Santa Clara
by Janice Bitters
A rendering of the proposed Gateway Crossings project offers a glimpse of the central paseo and park space in the project along Coleman Avenue. Image credit: city of Santa Clara public documents

Santa Clara’s City Council met for more than six hours Tuesday night, most of that time was spent weighing the merits of Gateway Crossings, a massive and controversial new residential project in the city.

City officials’ sentiment about the project, which sits near the Santa Clara Caltrain Station, could be summed up effectively with a single sentiment: It’s not perfect, but it’s good.

“This project may not be perfect to everyone, but it’s certainly better than it was, and it’s actually pretty good,” Vice Mayor Pat Mahan said Tuesday ahead of a unanimous vote to approve the amendment to the city’s general plan and a development agreement for the project.

The 21.4-acre project, proposed by Cupertino-based Hunter Storm Development, is slated to be built in two phases. In all, the development near the border of San Jose and Santa Clara will include 1,565 residential units, with 10 percent — or about 157 apartments — considered affordable to people making below the area median income. Gateway Crossings will also be home to a 225-room full-service hotel, 45,000 square feet of retail space and nearly 3 acres of park land. Today the site is primarily vacant land that is zoned for light industrial uses. 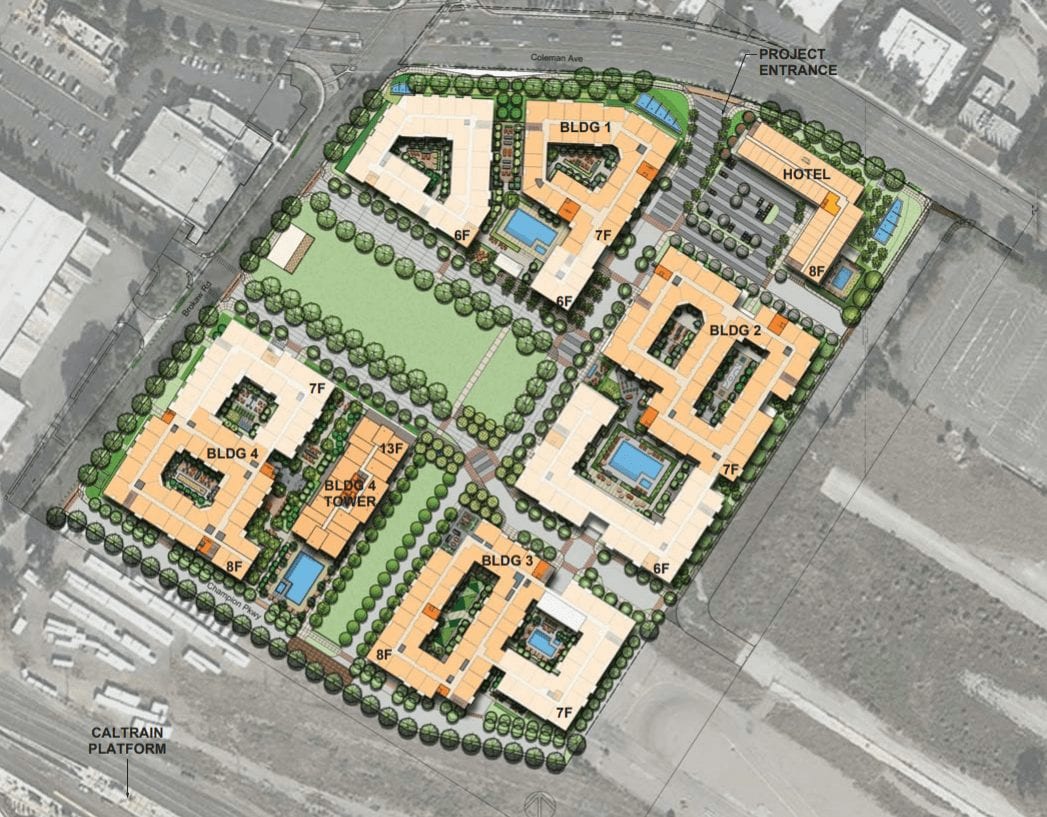 Hunter Storm has gone back to the drawing board to adjust the project proposal multiple times over the past year, even after getting a unanimous approval for the project from the city’s Planning Commission last November.

Since then, the developer has added more retail space to the project, included a vision for pop-up vendors and offered up a nearly free 35-year lease with the Police Activities League for a 7,000-square-foot indoor space to host programs for local kids. All of those additions drew resident and police officer testimony in support of the project Tuesday night.

Hunter Storm, though its iteration on the project, also moved a hotel that was originally meant to rise on the San Jose side of the development over to Santa Clara — a boon when it comes to generating tax dollars for Santa Clara.

Gateway Crossings is essentially a continuation of Hunter Storm’s Coleman Highline office development in San Jose, which is under construction now. That office portion of the project has already attracted major office tenants, including Roku and Verizon Wireless.

Even so, concerns still lingered from some residents and city leaders about whether the project had too much or not enough retail, and whether that would detract from efforts to create a retail destination in the city’s downtown.

“No one truly knows the negative impacts of adding the additional retail to the project,” Frank Lemmon, a Santa Clara resident representing a group called Reclaiming our Downtown, told the council. “You can’t put retail everywhere and expect success.”

Others wondered if the development would worsen or alleviate traffic congestion in the short-term and some residents questioned whether the project was designed in such a way that it would become the destination hot-spot along the busy Caltrain line that residents have been hoping for.

“We truly need to have more input from the architecture standpoint from the community,” resident Patricia Leung said.

But Hunter Storm leaders said they stand by its efforts on the proposal and underlined the company’s willingness to work with the city and residents.

“I’ve earned a seat at the table that I’m someone who is committed to this project and to the city,” Hunter Storm President Deke Hunter told councilmembers Tuesday night. “If things change — whether it’s market forces, or your goals change, or the VTA’s goals change — I think that we’ve shown ourselves as a company a decade ago, today and tomorrow that we will participate in that process.”