Paid rent, a full stomach and freedom to pursue her dreams: that’s what Santa Clara County’s new Basic Income Program means for Nayeli Grano, one of the 72 foster youth who have already started receiving funds.

As a 23-year-old sociology student transitioning out of the foster care system, Granco said she can now breathe easier knowing the money will not only help her survive and stay off the streets – especially in the increasingly expensive Bay Area – but also enjoy life.

“UBI is the least that we can do for our community to survive,” Grano said Monday. “UBI represents the happiness and stress-free mindset that people can have, because after paying for their basic needs, they finally have some cents left over to go out and have fun – you know, live a little.”

Santa Clara County’s program is the first in the nation to provide unconditional $1,000 monthly payments to foster youth between 21 to 24 years old who are struggling to find housing and jobs. The program runs from June 2020 to May 2021.

Basic income is finally in @SCCgov – for youth transitioning out of foster care.

The first of its kind in the nation, these monthly, unconditional $1,000 payments will help 72 folks afford housing, food and expenses for at least a year.@SJSpotlight pic.twitter.com/wMMf1EHPe5

The payments were unanimously approved in May, after being fast-tracked from a committee in December. Supervisor Dave Cortese, who first introduced the proposal, said the timing couldn’t be better with the ongoing pandemic, which has exacerbated issues of homelessness, immigration and child welfare.

But the veteran lawmaker and state Senate candidate said the program isn’t a handout, especially as these “children of the county” will maintain the autonomy on how to spend the money.

“They’re not a charity case. It’s our obligation to (help),” Cortese said. “That is the beauty of the UBI program: we are saying be empowered, make your decisions, invest in your life.”

Dr. Sandhya Hermon, a deputy director in the county’s Social Services Agency, said this population often has limited access to support systems, which can lead to lower educational achievements and unstable finances in the future.

According to Talk Poverty, 150 young people age out of the foster care system in Santa Clara County annually and 90% of foster youth across California don’t have any source of income when they transition out. San Jose nonprofit Razing the Bar, which provides mentorship and housing support services to foster youth, said 45% of the homeless population under the age of 25 spent time in the foster system.

Cortese said the year-long program is a much-needed investment into the local community. He said the UBI program’s funds will most likely go directly into schools and cash registers across the county — helping others prosper, too.

“What you need to do in the downturn is pick your spots and say, ‘Where can we take the scarce resources that we have and invest in a way that’s actually counter-cyclical, that actually lifts people up,’” Cortese told San José Spotlight.

“People don’t have conversations about finances because it’s so personal, nobody wants to talk about it and it’s not taught in schools,” Smith told San José Spotlight. “You usually you have to learn through trial and error, so that’s why our role is so crucial.”

While Smith will be mentoring others, she’s also receiving payments from the program, which will help pay for her grad school program at Pepperdine University. Smith is planning to earn a masters in management and leadership.

“Being able to give back to my peers, it’s something that I’m thankful for,” Smith said. “I was an advocate for myself and now I can continue to advocate for others … even though it’s too early to tell, I anticipate that we’ll have a positive impact.”

Gisèle Huff, president of The Gerald Huff Fund for Humanity and UBI enthusiast, sees Santa Clara County’s foster youth program as the next step in the evolution of humanity.

“It requires a mind shift,” Huff told San José Spotlight. “We’ve been steeped, especially in America, in the whole idea of individualism … We have to stop being led by the small elite whose business it is to keep power, and they’ve taken us in the wrong direction.” 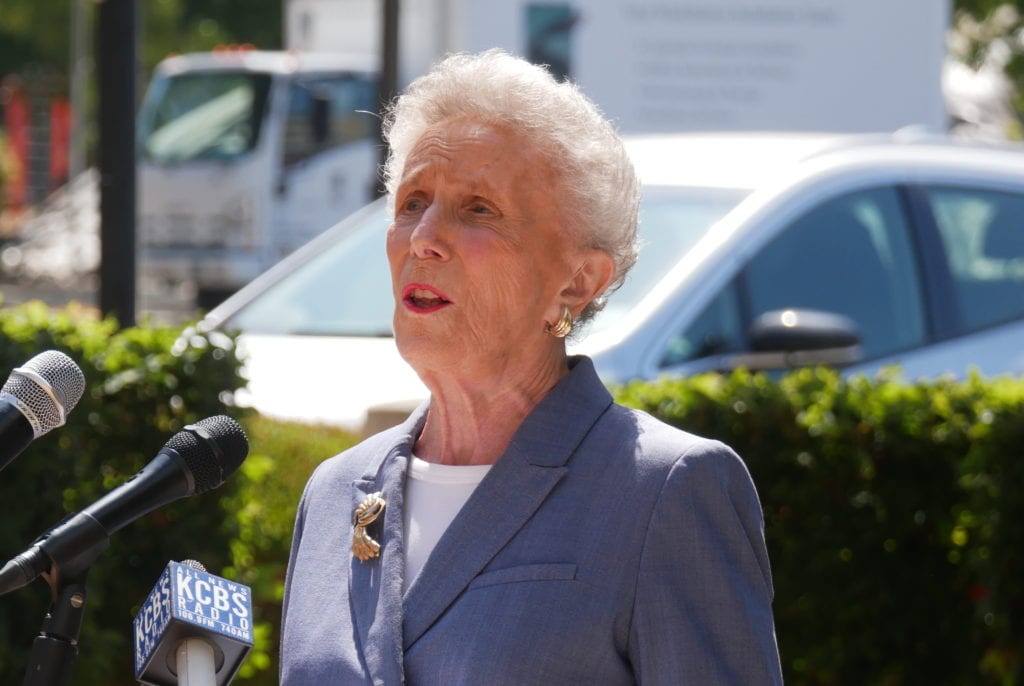 Huff sees this as opportunity to reimagine the survival of the economy and world in which we live.

“Most of the time if you want to do fundamental change, you are challenged by the fact that the status quo is almost unmovable, but when it fails so drastically as it’s failing before our eyes, you’re way ahead of the game,” Huff said. “Every single instance of (universal basic income) is just another tile, and it’s worth investing in or participating in, because it’s part of the bigger picture.”